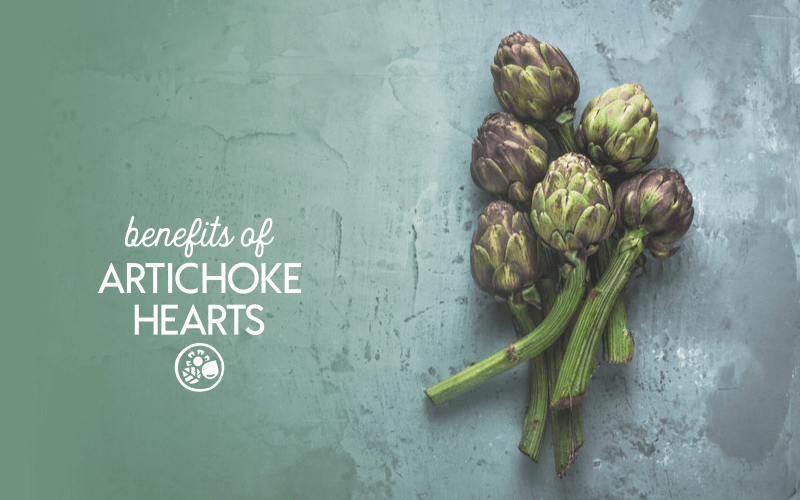 If you are thinking of adding artichoke hearts to your diet then we have good news for you. Not only are they a delicious way to boost veggie intake, but they come with numerous benefits as well. The obvious benefits of artichoke hearts is their vitamin and mineral content, but they also have the most antioxidants of any vegetable. Not only that, but there’s a plethora of benefits to be enjoyed when opting to add this veggie superstar to your diet.

In this post we’ll be delving into some of the many benefits artichoke hearts have to offer. Not just the health benefits, but the various other cooking and storage advantages to be enjoyed as well.

Artichoke hearts may not look (or taste) like a typical vegetable you’d see in your local produce market.

The artichoke itself is actually a wild flower, and the artichoke heart is the core of the flower. It contains a delicious meaty center beneath its fuzzy center — otherwise known as the “choke,” which is also the bud of the flower.

The petals, or “leaves”, of the artichoke are typically not consumed because of their hard, fibrous exterior (although they are edible if you can power through.) In fact, the only part of the artichoke that isn’t edible is the fuzzy bud at the center of the flower.

Artichoke hearts are typically purchased and consumed in a variety of ways:

Fresh artichoke hearts are what you would typically expect to find in your local produce market.

Since you will be buying the whole plant when purchased fresh, this means you’ll have to put a little work in to peel away the petals and get to the heart of the artichoke.

The benefits of artichoke hearts when fresh, as opposed to canned/jarred, are that they are less processed and don’t contain the extra sodium that gets added during the canning process.

The downside of opting for fresh artichoke hearts, however, is that they require more prep time as you’ll have to remove the petals and cook the heart yourself.

Another potential downside of going the fresh route is that these artichokes may not be as nutritionally-dense as the preserved varieties, as canned and frozen foods have been shown, in many instances, to contain more nutritional contents than their fresh counterparts. [source]

Unlike the fresh or canned variety, frozen artichoke hearts have already been peeled, cut, blanched, and preserved via freezing.

Frozen artichoke hearts can be purchased at local supermarkets under a variety of brand names.

For this example we will be looking at the nutritional contents of the Birds Eye brand of frozen artichoke hearts. The following is for a single 6-piece serving:

The benefits of artichoke hearts of the frozen variety are two-fold. For one, the grunt work of deflowering them is already done, but at the same time you’re not consuming all of the sodium that is commonly used in the canning process.

In essence, frozen artichoke hearts provide the best of both worlds.

Canned artichoke hearts are artichokes that have been peeled, pickled in brine, salt, and preserved in cans or jars.

Artichoke hearts that have been canned/jarred are usually also flavored with various spices and seasonings, depending on the brand and variety you choose.

The nutrition information for a 4-piece serving of Cento’s brand of canned artichoke hearts is as follows:

The benefits of artichoke hearts when canned is that they’re convenient and flavorful. Very little (if any) prep time means that you can simply pop open a jar and add them to whatever recipes or dishes you may be preparing.

Another benefit, thanks in part to all of the brine, salt and dressing, is that canned artichoke hearts tend to be more flavorful and palatable than the plain varieties.

The downside, however, is the added sodium content; which can be problematic for those looking to monitor their intake.

Now that we’ve gone over their varieties and differences, let’s have a look at some of the benefits of artichoke hearts as it relates to health.

Much like many other veggies and plant-based foods, one of the major benefits of artichoke hearts is that they’re relatively low in calories when compared to other foods.

Monitoring caloric intake is an important aspect of managing weight and good health. According to a 2007 study published to PubMed, researchers found that fat loss depends entirely on an energy deficit. [source]

The way that energy is measured is with calories, and artichoke hearts can help leave you feeling full and satiated thanks to its low caloric density.

A diet low in fat can help reduce the risk of various health complications, such as coronary heart disease, insulin sensitivity, hypertension, and more. [source]

Using artichoke hearts in pastas and salads can make for a lower-in-fat meal when substituted for meat and other animal-based products typically used.

Seeing as how artichoke hearts are a plant-based food, you can rest assured that they contain no dietary cholesterol.

Consumption of dietary cholesterol has been linked with an increase in LDL cholesterol (the “bad” kind,) and because of that the American Heart Association recommends limiting intake to less than 300 mg per day. [source]

Displacing fatty and other cholesterol-laden foods with artichoke hearts can be a great way to manage your dietary needs, and they often make for a great substitute for meat in various dishes.

The benefits of consuming dietary fiber and vast and numerous. According to the Harvard School Of Public Health, dietary fiber appears to reduce the for various diseases, including:

One of the most well-known benefits of artichoke hearts is that they are packed with fiber, clocking in at as much as 5 g of fiber for every 25 calories!

Needless to say, incorporating artichoke hearts into your diet can be a great way to boost fiber intake.

Believe it or not, artichoke hearts can be an excellent source of plant-based protein.

A single serving size of fresh artichoke hearts contains 2 g of protein, which may not sound like a lot at first, but you have to measure it relative to its calorie count, which is only 25 calories.

This means that for every 25 calories of artichoke hearts you eat, you’re also getting 2 g worth of protein. So 10 servings would provide you with a whopping 20 grams of protein, and it would only cost 250 calories!

Loaded with Vitamin A

One of the other various health benefits of artichoke hearts is that they contain vitamin A — a nutrient that impacts vision, immune function, reproduction, and various other functions.

According to the Mayo Clinic, the recommended amount of daily vitamin A needed for men is 900 mcg and for women 700 mcg.

Adding some artichoke hearts to your diet can help you reach your daily needs by contributing to your intake of vitamin A.

More Antioxidants Than Any Other Vegetable

We’ve saved the best for last!

One of the greatest benefits of artichoke hearts is that they contain more antioxidants than any other vegetable.[source]

Antioxidants — such as polyphenols, flavonoids, and anthocyanins — can help reduce damage and oxidative stress that free radicals cause to the cells. [source]

In laboratory and animal studies, the presence of increased levels of exogenous antioxidants has been shown to prevent the types of free radical damage that have been associated with cancer development.

Needless to say, the benefits to be gained from eating literally the most antioxidant-rich vegetable on earth are obvious and cannot be understated.

Other Benefits Of Artichoke Hearts

Now that we’ve gone over some of the health benefits of artichoke hearts, let’s take a look at some additional benefits that are worth mentioning.

Artichoke hearts can be used in a variety of creative meal and food ideas, such as:

There’s no shortage of ways in which you can use artichoke hearts, and no pantry is complete without a few jars on hand.

Another advantage you’ll enjoy when introducing artichoke hearts into your lifestyle is that they require very little prep time.

Of course, this only applied to the canned, jarred and frozen varieties. Fresh artichokes need to be peeled manually, which can be time-consuming.

The preserved varieties of artichoke hearts are quick and convenient though, and often come already seasoned and flavored. You can simply pop open a jar and dig in.

No need to fret about your artichoke hearts expiring as they often come already preserved and with a distant expiration date.

This mostly applies to canned and jarred artichoke hearts, but even a fresh artichoke plant can last for 5 to 7 days, according to StillTasty.

Sprinkling your artichokes with water and placing them inside of a plastic bag in the refrigerator can help them stay fresher longer.

Despite the countless benefits of artichoke hearts in all of their many forms, they’re not without their potential disadvantages. Let’s have a look at some.

Artichoke hearts that are canned and jarred are often pickled in salty brine, and because of that they tend to be relatively high in sodium content.

Sodium is a mineral and essential electrolyte that the body uses for water balance, central nervous system function, and managing the electrical pulses in the body.

However, a study from 2016 found that increased sodium intake correlates with an increase in blood pressure. [source]

This means that for those seeking to limit their intake of sodium, canned and jarred artichoke hearts can be problematic if the sodium content is not removed from elsewhere in the diet to compensate.

The benefits of artichoke hearts do not stop here. There’s countless additional reasons why incorporating them into a healthy lifestyle can have profound benefits.

Have a look through some artichoke heart recipe ideas to find some unique and creative dishes to tickle your fancy. Not only will your taste buds thank you, but your body will as well.

link to Agave Nectar VS Agave Syrup | The One Important Difference

Thanks to its natural sweetness and lower glycemic index than more traditional sweeteners, agave has grown in popularity among health-conscious consumers with a sweet tooth. There's a variety of...

By now it's probably no secret that fresh pomegranates are nutritional powerhouses, packing vitamin C, fiber, and various antioxidants. What about pomegranate powder, though? Do these benefits carry...