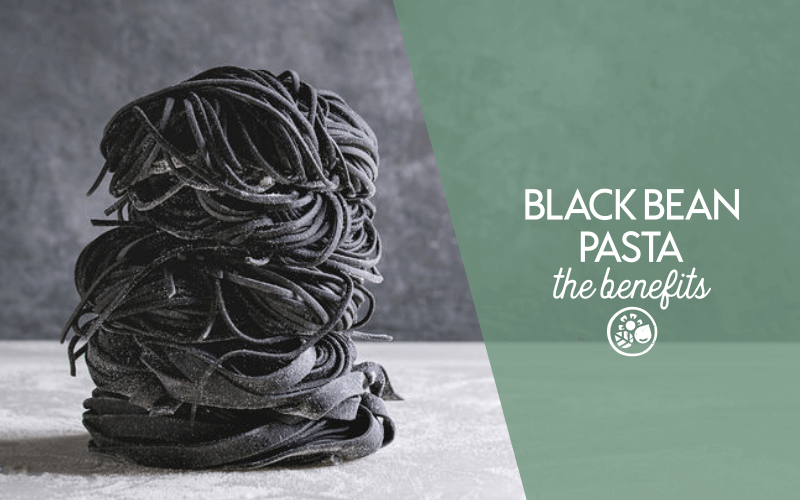 Pasta made from beans may seem like a farfetched concept, but it’s a real thing. In fact, there’s a variety of pasta substitutes on the market that give health-conscious consumers an alternative to the semolina and wheat durum that pasta is traditionally made from. In this post we’ll be taking a look at some of the benefits of black bean pasta in particular, and why it’s so much healthier than traditional pasta.

What Is Black Bean Pasta?

Black bean pasta, as the name suggests, is pasta that is made from black soybeans.

Much like other types of bean pastas, black bean pasta is made by grinding dried black beans into a fine powder and combining it with a thickening agent of some kind.

The result is a bean-based product that looks and feels just like regular pasta, only made with more nutrient-dense ingredients; making black bean pasta a healthy alternative.

Black bean pasta is prepared much like your traditional wheat pasta is: by immersing it in boiling water for a predetermined amount of time. The cook time may vary by product, so make sure to check the directions on the label.

When cooking bean pasta especially, it’s important to pay close attention to your cook times. Bean pastas have a tendency to quickly turn to mush if overcooked.

How It Can Be Used

The uses for black bean pasta stretch far and wide. Bean pastas offer just as much variety and versatility as traditional pasta does:

The video below demonstrates how to make a seemingly simple, but tasty, black bean pasta dish:

There’s no shortage of black bean pasta recipes to explore, so be sure to search around to find some meal ideas you may like!

How Does It Taste?

One of the benefits of black bean pasta is that it is reported to have a more neutral flavor when compared to other bean pasta varieties.

According to a Reddit user, there is a distinct black bean flavor, but it can be masked with other ingredients, like pesto and parmesan cheese.

Another user claims that it has a cardboard-like consistency and flat texture that isn’t as firm as traditional pasta.

The consensus on bean pastas in general is that, although they are a healthier alternative, they don’t quite have the same taste and texture as traditional wheat pasta does. However, this can be disguised with other ingredients and seasonings.

Why Black Bean Pasta Is Healthy

Considering that black bean pasta is made from beans, you may hold the presumption that it carries the same health benefits as beans do. Is this true though? In many regards, yes.

In a previous post where the nutritional value of legumes was compared to that of pasta, the legumes came out ahead by a modest margin. Let’s examine how black bean pasta stacks up though.

The table below compares the nutritional value of Barilla’s brand of wheat-based spaghetti with that of Explore Cuisine’s Organic Black Bean Spaghetti:

As you would surmise from the comparison, black bean pasta is healthier than regular pasta by a seemingly wide margin! However, there are a few areas where it falls short. Let’s have a closer look at some of these pros and cons.

Some of the benefits of opting for a legume-based pasta alternative, like black bean pasta, are as follows:

As indicated in the table, black bean pasta contains less calories per ounce than traditional pasta does.

This means that you’ll get more food, by weight and per calorie, with the bean-based alternative than you would with regular old pasta. This can aid with satiety by helping you feel full for longer, making black bean pasta a great option for those who may be trying to shed some spare pounds.

Your body uses protein in many different ways, but the main function protein is tasked with is building and repairing muscle tissue. This is especially true for anyone who does any kind of resistance training, like weight lifting and calisthenics. Athletes of all stripes can gain from adding more protein to their diets.

Protein has also been shown to boost metabolism. This is due in part to the energy your body expends trying to digest and metabolize it. This suggests that incorporating more protein into your diet can aid with weight loss.

Compared to regular pasta’s paltry 7 grams of protein per serving, black bean pasta packs a whopping 25 grams for the same serving size, making it a superior alternative for anyone trying to get more protein in their diet.

Potassium is an essential mineral and electrolyte responsible for controlling electrical pulses within the body. These pulses dictate a variety of bodily functions, like muscle contractions, blood pressure, water balance, and more.

One key benefit of potassium is that it acts as somewhat of a counter balance to sodium. Like potassium, sodium is an essential electrolyte that causes your body to retain water, whereas potassium causes it to expel water.

One of the downsides of the modern Western diet is that it tends to contain too much sodium and not enough potassium, which results in water retention and bloating. This imbalance can also be a contributing factor to hypertension (or high blood pressure,) meaning that adding more potassium-rich foods to your diet (in addition to reducing sodium intake) can potentially help in managing blood pressure levels.

Considering that beans are one of the most potassium-rich foods that exists, it makes sense that black bean pasta has nearly 10x the potassium that traditional wheat pasta has. If potassium is what you’re looking for, then look no further; this one isn’t even close! Just make sure to always consult with your physician before taking on a dietary change like this.

Fiber is an indigestible form of carbohydrate that passes through the body and carries out waste, thereby lowering serum cholesterol and reducing risk factors for heart disease. It also plays a role in regulating blood sugar and insulin resistance.

Studies suggest a relationship exists between fiber intake and a reduction in coronary heart disease, as well as some cancers.

Those of you who may be seeking to add more fiber to your diet are in luck, because black bean pasta — much like any other bean-based product — is plentiful with fiber. The legume-based alternative packs 11 grams of it, compared to the meager 3 grams found in standard spaghetti.

Calcium is also an essential mineral in the body. It’s responsible for bone health and strength, as well as regulating muscle contractions and nerve impulses.

Women tend to have higher calcium needs than men do, but age is also a factor. A lack of calcium in the diet can possibly can lead to osteoporosis, but too much calcium can have a negative impact on your health, so make sure to consult with a physician before taking on any dietary changes.

Compared to traditional pasta, the black bean pasta does contain more calcium, but not by much. Regular pasta contains no calcium, whereas the bean-based alternative contains 120 mg. It should be noted that this only accounts for roughly 10% of your RDA, so if your aim is to boost your calcium intake then you may want to include other calcium-rich foods.

One of the many benefits of black bean pasta, compared to traditional wheat-based pasta, is that it contains roughly three times as much iron!

Iron is an essential element for the production of blood cells. Nearly 70% of your body’s iron content is stored in the hemoglobin, or red blood cells. Insufficient iron consumption in your diet can lead to anemia — a condition described as a lack of the red blood cells required to deliver oxygen to the body tissue.

For those seeking a more iron-rich addition to their diet, black bean pasta is the healthier alternative because it contains 30% of your body’s RDA for iron, compared to the 10% found in wheat durum pasta.

Perhaps the biggest selling point of bean-based pasta alternatives is that, unlike their semolina counterpart, they contain no gluten. This could be especially beneficial for someone with Celiac disease — an immune disorder in which gluten-based foods cause damage to the small intestines of those affected.

Whether you’re affected negatively by gluten, or if you’re simply looking to consume less of it, black bean pasta is an excellent alternative for someone who otherwise cannot tolerate standard pasta because of it.

Although the benefits of black bean pasta are profound, there are some areas in which it comes up short when compared to the good old wheat variety of pasta. The significance of these shortcomings is minor and depends entirely on your own preferences and nutritional needs.

One of the drawbacks of opting for a bean-based pasta alternative, like black bean pasta, is that it contains three times as much fat as regular pasta does.

Even though, the black bean pasta only has 3 grams of fat per serving — none of which is saturated fat — so the significance of this should be minimal for most people. However, if you’re in a position where every fat gram matters, then you may want to hold off on the legume variety for now.

This is something that will vary by product, but of the two pasta products compared herein, the wheat pasta contains 0 mg of sodium, whereas the black bean pasta has 7 mg.

The significance of 7 mg of sodium can be likened to a rounding error, so this shouldn’t be a factor for most people. As previously mentioned though, this will vary by product, so be sure to check the nutrition facts labels.

Although black bean pasta has fewer carbohydrates per serving than wheat pasta does, a higher percentage of those carbohydrates come from sugar.