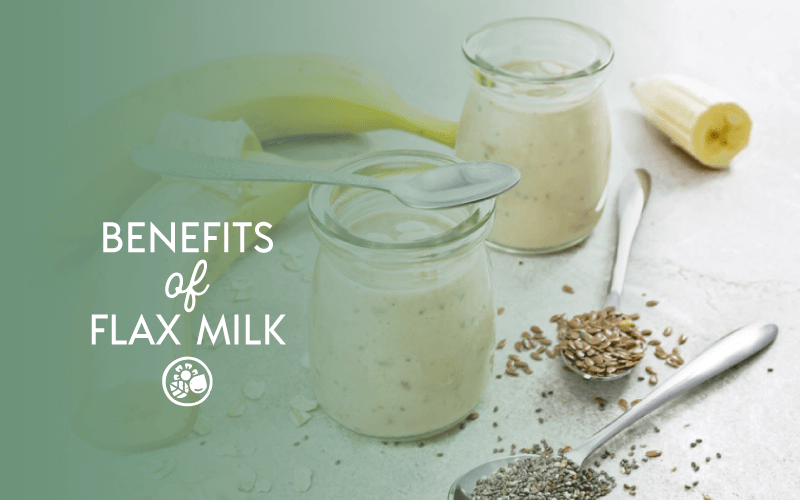 For those seeking to avoid dairy products — whether it be for lactose intolerance, ethical reasons, or whatever other reason — there is no shortage of dairy-free milk alternatives available for purchase. Almond milk would be the most popular option, but more obscure varieties exist as well. One such variety would be flax milk. That is, milk made from flaxseed. In this article we’ll be going over all of the benefits of flax milk to be enjoyed when opting for it over almond or dairy milk.

In short, the benefits of flax milk come from the flax seed, which contains omega-3 fatty acids and monounsaturated fats– the “good” kind. Additionally, flax milk contains no sugar, no carbohydrates, and just as much protein as dairy milk; making it a nutritious alternative that contains no lactose or nuts.

What Is Flax Milk?

Flax milk is a type of plant-based milk that’s made by mixing flaxseeds with water and blending it into a milky consistency. The mixture is strained to remove any solid bits, resulting in a liquid that’s similar in appearance to traditional dairy milk. 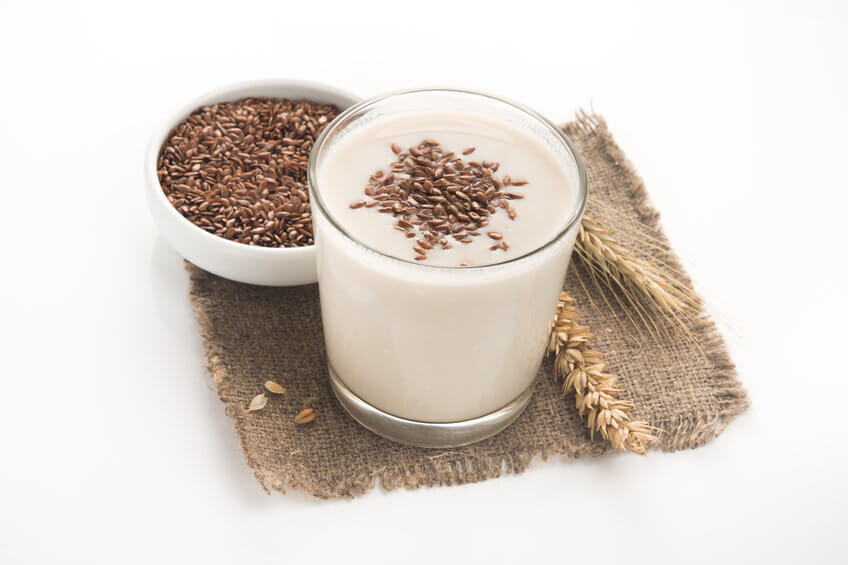 Flax milk is often sought as a lactose-free milk alternative that also does not contain nuts. This sets it apart from nut-based milk products, such as almond milk and cashew milk. Flax milk is made from flaxseed, making it an ideal choice for those with nut allergies.

Most of the nutritional benefits of flax milk come from the fact that they’re made using flaxseed– a nutritional powerhouse.

The health benefits of flaxseed are numerous, according to WebMD. This is mostly due to the omega-3 fatty acids, lignans, and fiber contained within them.

Now that we know what flax milk is, let’s examine some of the benefits you’ll enjoy when opting for it over other milk varieties, such as almond milk and dairy milk.

The table below compares the nutrition facts of a 1 cup serving of Good Karma Flax Milk, Unsweetened — the most-review flax milk product on Amazon.com — with an equal serving size of almond milk, whole milk, and skim milk:

As you can see, the nutritional benefits of flax milk are quite profound when compared to the alternatives. Let’s elaborate.

The marquee advantage of choosing plant-based milks over dairy-based milks is that they contain no lactose.

Lactose is a type of sugar found in dairy-based milk. Some people are unable to properly digest lactose, leading to some uncomfortable symptoms when consumed. These symptoms include diarrhea, gas, and bloating, according to Mayo Clinic.

Flax milk offers a lactose-free alternative to dairy milk for those who may be lactose intolerant.

Flax milk isn’t the only lactose-free milk that exists. In fact, one of the more popular varieties would be almond milk– that is, milk made from ground almonds.

The problem with milk made from almonds is that it contains nuts, which can be dangerous for this with nut allergies.

Not only does flax milk make for a lactose-free option, but it’s also nut-free as well; making it an ideal option for those who may have nut allergies and are lactose intolerant.

One big advantage flax milk has over dairy milk is that it contains fewer calories.

Calories are a useful tool as they help you measure your energy intake, which is necessary when managing body weight. According to Mayo Clinic, weight loss boils down to consuming fewer calories than your body burns.

Not only does flax milk have less calories than full-fat whole milk, but it even has less than skim milk– a type of milk with much of its fat removed.

Flax milk is also advantageous for those following a ketogenic (or “keto”) diet– a diet characterized by displacing carbohydrate calories with fats and proteins so that your body produces ketones to burn for energy.

Not only does flax milk contain fewer carbohydrates than dairy milk, but it also has less than almond milk as well. In fact, most of the calories in flax milk come from “good” fats and protein.

If flax milk contains no carbohydrates then that also means it contains no sugar as well.

Nearly every other milk variety out there contains sugar in some quantity. Flax milk is one of the only sugar-free milk alternatives.

This makes flax milk a preferable option for those seeking to avoid bad fats while making sure they get enough of the good kind.

Perhaps one of the more overlooked benefits of flax milk is that it contains omega-3 fatty acids.

Omega-3s are a type of “good” fat that has been shown to have numerous benefits for human health, according to Healthline. Some of the benefits include:

Flaxseed is a well-known source of omega-3 fatty acids, so it stands to reason that flaxseed-derived milk would also contain them.

8. Contains Just As Much Protein As Dairy Milk And More Than Almond Milk

Athletes and gym enthusiasts alike will be happy to hear that flax milk contains roughly as much protein per serving as dairy milk does– including skim milk.

Protein is an essential macronutrient that the body uses for countless processes, some of which include building muscle and repairing connective tissue. Protein also has metabolic benefits.

Going plant-based with your milk consumption will not cost you any protein, as a 1-cup serving of flax milk contains 8 grams of it– roughly the same amount found in whole and skim milk.

9. More Iron Than Any Other Milk

Iron is a mineral that the body needs in small quantities to function properly. Iron is essential for making hemoglobin– a protein in red blood cells that carries oxygen throughout the body.

A lack of iron can lead to anemia, a condition characterized by fatigue and weakness, according to the National Institutes of Health.

Flax milk contains more iron than any other type of milk surveyed in our comparison.

Vitamin A, also known as retinol, is an essential vitamin and antioxidant that the body relies on for vision health, growth, cell division, immunity, and more. Vitamin A deficiency can lead to anemia and dry eyes, according to Mayo Clinic.

Those seeking to boost their intake of vitamin A will be pleased to know that one of the benefits of flax milk is that it contains more vitamin A per calorie than any other milk surveyed.

Finally, the flax milk surveyed for this comparison is fortified with B12– a type of vitamin that is produced by bacteria and originates in soil. It is needed by the body for various processes.

According to the National Institutes of Health, vitamin B12 helps with making DNA, as well as blood and nerve cell health.

Those following a minimally-processed diet may struggle to reach their B12 intake goals, as most of us in Western civilizations get it from fortified foods. Just a single 1-cup serving of flax milk, though, will provide you with 60% of the Daily Value! This is significantly more than almond, whole, or skim milk. More than all of them combined, in fact.

In conclusion, the benefits of flax milk are overwhelming. Compared to other milk varieties, it contains more of the good stuff and less of the bad stuff. If nutritional content is your focus then the choice is clear– flax milk is the winner.

That said, there are various other factors, such as price and taste, that can influence your decision. However, if you can look past that then you’ll be sure to enjoy all of the benefits flax milk has to offer.