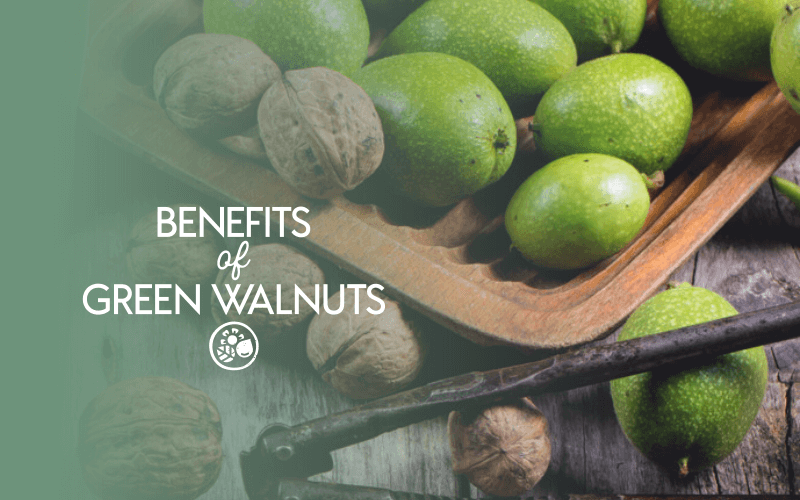 Provided you’re not allergic, tree nuts — including almonds, cashews, pecans, walnuts, and other nuts that grow on trees — can provide a tasty plant-based snack. One such nut would be green walnuts, which we’ll be discussing in this post as we go over all of the benefits of green walnuts.

The distinctive, savory and sometimes sweet flavor of green walnuts are a great addition to all kinds of recipes, from soups and sauces to baked goods, breakfast cereal, and much more. They’re even a great source of protein and healthy fat.

If you like the idea of adding nuts to your diet and you find the flavor and versatility of walnuts particularly appealing, you might naturally be interested in green walnuts. You may also be wondering what they are and what the benefits of green walnuts are as well.

Even though they’ve been popular for centuries in certain circles, green walnuts are gaining more widespread attention for their unique properties, along with the flavor they can bring to certain dishes!

If you want all of the health benefits of walnuts, but you’re itching to try a stronger flavor profile and new ways to prepare your ingredients, here are a few things you need to know about these early harvest versions of your favorite tree nut.

What Are Green Walnuts?

Green walnuts are, quite simply, walnuts that are picked before they have ripened.

They are so named because the outer skin at the time of harvest is a vibrant hue of bright green, like a lime, stippled with tiny, white spots.

Later in the season, the skin will become paler and yellow, indicating that the nut inside has matured.

Green walnuts may also be referred to as wet walnuts, perhaps because the underdeveloped nutshell inside has yet to fully form and harden. This makes them sticky, syrupy, and full of juice.

When handling green walnuts, be aware that the juices can be messy, and they may cause dark stains, so make sure to wear gloves and an apron or other kinds of protective clothing.

The Origin Of Green Walnuts

Green walnuts are an early harvest produce, plucked before maturity for centuries in Italy and France, and more recently, along the California coastline; where hot, dry climates are ideal for growing walnuts.

They can usually be harvested around the months of May and June, although it’s imperative to make sure they are picked early enough that the tough shell of the nut does not begin to harden.

Traditionally, green walnuts are harvested on June 24, aligned with the feast day of St. John the Baptist, who was born on the summer solstice.

This is tied to the production of nocino — a sweet, Italian liqueur that draws from the high concentration of tannins found in green walnuts.

Taste And Aroma Of Green Walnuts

Although unripe walnuts have the beginnings of the rich, earthy, mature walnut flavor, one of the main benefits of green walnuts is that they are incredibly fragrant and have a spicy, bitter flavor profile all their own.

While this doesn’t make them well-suited for raw consumption, it does make them a unique component in a range of traditional recipes, with more emerging as modern foodies begin to experiment with this arguably underused ingredient.

Let’s go over some of the green walnuts benefits you’ll enjoy when chosen over regular walnuts.

1. They Are Nutritionally Dense

When it comes to nutrition facts and benefits, you’ll find that green walnuts have all the same inherent goodness as their more mature brethren.

In a single, one-ounce serving of walnuts, you can generally expect the following nutritional properties:

A single serving of walnuts also offers up a percentage of several recommended daily vitamins and minerals, including:

2. They Are Rich In Antioxidants

Walnuts are rich in antioxidants and plant-based omega-3 fatty acids (especially alpha-linolenic acid, or ALA), boasting more than any other nut. They also feature polyphenols and polyunsaturated fats.

What does all of this mean? It means that the benefits of green walnuts go far beyond their flavor.

4. They Can Be Satiating

While walnuts are high in calories, they’re an energy-dense food, which means they can help you to feel full and satisfied longer.

This makes them a great snack or addition to many recipes — especially if you’re concerned about weight management.

5. They Contain Tannins Not Found In Regular Walnuts

What really sets green walnuts apart from mature walnuts are the tannins, which are responsible for the bitter flavor of the unripe nut.

It should be noted that there is some debate about the potential health benefits versus detriments of tannins. While some tannins may function as antioxidants, they could also inhibit the uptake of certain nutrients in the body.

The tannins are primarily what give green walnuts their unique flavor and makes them ideal for certain preparations, such as pickling or fermenting.

If you’re worried about the tannins, simply moderate your intake.

6. They Can Be Harvested Earlier

On a purely practical level, green walnuts offer you the opportunity to enjoy the many benefits of walnuts much earlier in the growing season, as they can be picked in late spring and early summer; unlike mature nuts, which typically aren’t ready to pick until about October.

Again, it is imperative to gather them when they’re still soft inside, before the walnut shell starts to harden, otherwise they’ll be impossible to bite through and impractical to pickle.

Although most people don’t eat green walnuts raw due to an astringent flavor, their aromatic properties and distinctive flavor profile make these unripened nuts perfect for specific preparations, where mature walnuts would be far too mild.

Green walnuts have traditionally been used in a handful of very specific ways.

If you simply want to enjoy the flavor, it’s easy enough to brine them and sun dry them. The result will be a delectable finger food somewhat similar to olives, albeit with greater tartness.

8. They Can Be Pickled and Preserved

Pickling is another common preparation that really brings out the flavorful benefits of green walnuts.

With a combination of vinegar and spices (salt, sugar, pepper, and so on), you’ll create a tasty treat that has traditionally been used to add zest to charcuterie plates, but one that is equally suited to elevating vegetarian and vegan snack boards.

9. They Can Be Made Into Sauces

Some people preserve them in syrup or turn them into tart marmalade. However, nocino is arguably the best-known recipe calling for green walnuts.

10. They Can Be Made Into Various Beverages

This heady liqueur — sometimes referred to as “black gold” — is an Italian digestif generally made with vodka and sugar. Vanilla, cinnamon, citrus, and other sweet/spicy ingredients may be added to enhance the flavor.

The French version is called vin de noix (nut wine) and it’s made with sugar and wine, instead of vodka.

In terms of the health benefits of green walnuts versus mature nuts, you’ll enjoy virtually the same stuff, regardless of when you harvest.

Practically speaking, mature walnuts are a bit easier on the palette if you plan to eat them raw.

With that being said, there are certain preparations for which green walnuts are considered far superior. If you plan to brine, pickle, or preserve them, or draw out the tannins and turn them into infused liqueur, green walnuts deliver the heightened flavors that perfectly fit the bill.

As we've gone over in previous posts, there's no shortage of alternative pastas on the market -- one of which being Barilla's brand of white fiber pasta. In this post we'll be comparing white fiber...

If you are thinking of adding artichoke hearts to your diet then we have good news for you. Not only are they a delicious way to boost veggie intake, but they come with numerous benefits as well. The...

PlantBasedFAQs.com is an online publication for learning about plant-based foods, snacks, ingredients, and more!