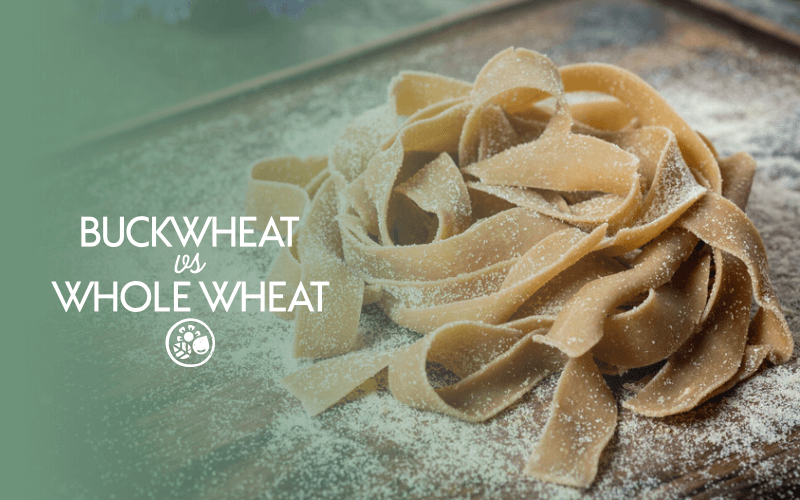 If you take a trip to your local grocery store and happen to visit the pasta aisle, the variety of options can be overwhelming! Not only are there many different brands of pasta on the market today, but each brand offers many different types—from gluten-free rice or chickpea pasta to high fiber or whole wheat pasta, there is certainly no shortage of choices. Let’s talk about the differences between two mainstays of the whole-grain pasta department: buckwheat pasta vs whole wheat pasta.

To understand the difference between buckwheat pasta vs whole wheat pasta, we must first ask: what is buckwheat, and why is it a great choice for pasta?

For starters, despite its name, it’s not actually wheat at all! According to the Whole Grains Council, buckwheat is officially known as a “pseudo-grain.” Despite sharing no genetic ties to any grain family, buckwheat is generally accepted as a whole grain. This is due to its similar uses in cooking and baking, as well as its nutritional value.

This “false” wheat is currently enjoying a trendy new status with modern bakers, but it has historically been a popular dietary staple across much of Asia and even parts of Europe.

Japan, Korea, and Italy have all developed their own variations of pasta using buckwheat flour. Europe has traditionally used the wheat-alternative to make different types of pancake-like foods, such as galettes, blintz, and blinis, although some parts of Eastern Europe such as Russia also make porridge using buckwheat in its whole form.

Since it is not technically a wheat product at all, buckwheat is naturally gluten-free. This makes it a fantastic option for those struggling with celiac disease, or anyone else who finds that their body struggles to digest typical grains.

In addition to this, buckwheat is high in fiber and is a great source of plant-based protein.

According to the Grains & Legumes Nutrition Council, buckwheat is rich in polyunsaturated essential fatty acids (such as linoleic acid), vitamins B1, C, and E, and contains higher levels of bioavailable zinc, copper, and manganese than other cereal grains.

It has an earthy flavor that some have described as “nutty.”

The texture of pure buckwheat pasta is also different from that of other kinds of pasta: buckwheat is known for having a more coarse, chewy texture.

If you’ve ever eaten a dish that included Japanese soba noodles, then surprise! You’ve experienced the unique food that is buckwheat pasta. In fact, the word “soba” is the Japanese word for buckwheat.

Just be aware if you’ve chosen to avoid gluten in your diet: oftentimes modern soba noodles are made of buckwheat mixed with other flours, including wheat. It’s best to always double-check before enjoying any dish that includes Japanese soba noodles.

What might be referred to as “regular” pasta is made from what is commonly known as “refined grains.” This means that the grains have been through a process of milling that strips many valuable nutrients from them.

Harvard’s School of Public Health reports that “refining wheat creates fluffy flour that makes light, airy breads and pastries, but the process strips away more than half of wheat’s B vitamins, 90 percent of the vitamin E, and virtually all of the fiber.”

This is why many health-conscious people have focused on eating “whole grains,” or less processed grains that retain all of their nutritional value. 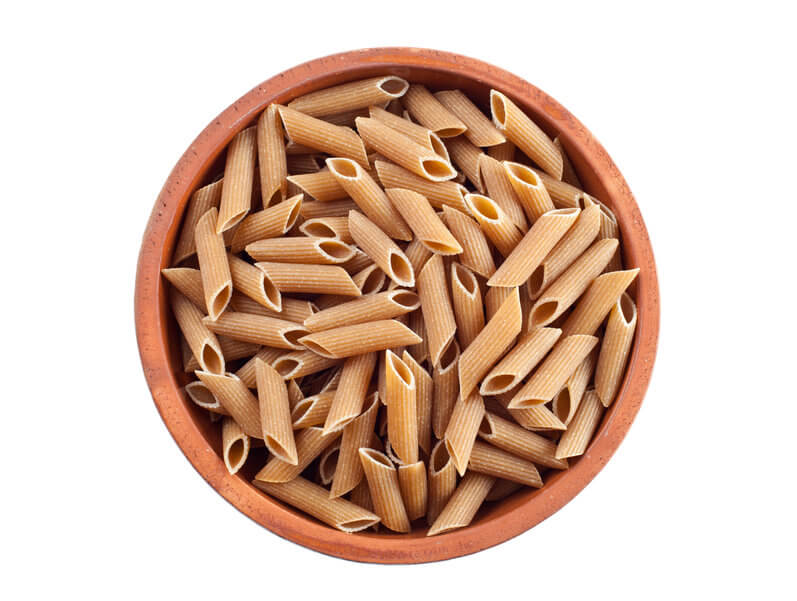 If you’re looking to make the switch to whole wheat pasta, you’re in luck!

Most of the big pasta brands now make whole wheat alternatives to their standard pasta offerings, due to the growing demand for healthier foods. You should be able to find whole wheat macaroni, penne, spaghetti, and just about any other shape of pasta in the aisles of your local grocery store, right alongside their less-healthy counterparts.

Now that we’ve discussed the grains individually, let’s look at the differences between the two types of pasta.

Buckwheat Pasta Is Lower in Carbohydrates

If you’re concerned about your macros and looking to limit carbohydrates, be careful! Some brands of buckwheat pasta contain up to three times the carbs per serving when compared to whole wheat pasta.

As we talked about earlier, whole wheat is a great source of plant-based protein!

This benefit carries over into whole wheat pasta, which contains almost double the amount of protein as its whole-wheat counterparts.

This is a great benefit, especially to those who are committed to a vegan or otherwise plant-based diet.

When it comes to taste and texture differences in buckwheat pasta vs whole wheat pasta, they’re actually pretty close to the same. Both are known for being a little grittier and perhaps chewier than “regular,” refined-flour pasta.

While this may take some getting used to, the health benefits far outweigh the temporary inconvenience of learning to love a new texture.

What Should I Choose?

If you are eating a strictly gluten-free diet, buckwheat pasta will be the best choice for you—since it’s not a grain at all, you can be assured that pasta made from 100% buckwheat is a safe and healthy choice for you.

If you are looking to limit your carbohydrate intake, then whole wheat pasta might be the better choice.

While it is still not a low-carb food, this type of pasta is better equipped to help you meet your nutritional goals and stay within your macros.

Much like previous comparisons between whole wheat and other varieties of pasta, the battle between buckwheat pasta vs whole wheat pasta comes down to personal choice. Which pasta’s taste and texture is preferable to you? What are your health goals?

Or, perhaps you’re thinking more like me: “which one is on sale this week at the grocery store?”