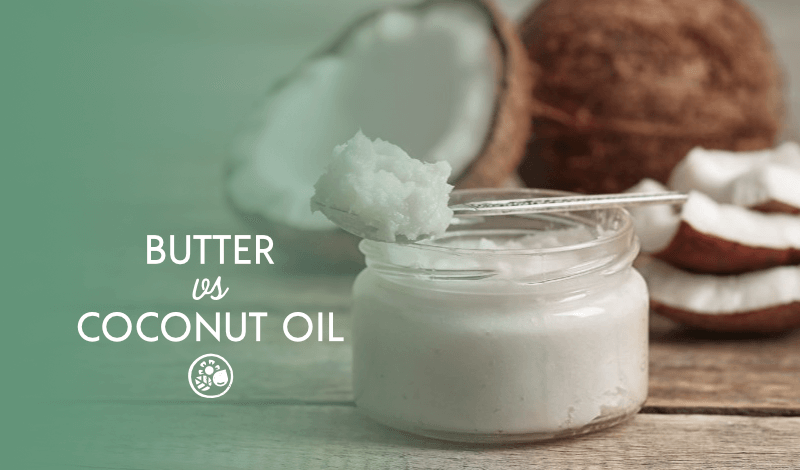 There’s nothing like the soft, creamy richness of butter. Whether used as a spread on a bagel, an ingredient in a baking recipe, or simply as a non-stick frying agent, butter adds flavor and has countless uses. It may not always be the healthiest choice, though. This may entice some health-conscious consumers to seek alternatives. One such plant-based alternative would be coconut oil, but as you’ll see in this comparison of butter vs coconut oil, it might actually have a greater downside than butter.

Let’s dig into these details further to get a better understanding.

Butter is essentially just cream that has been made with cow’s milk and churned to remove the liquid. It is solid at room temperature and softens when exposed to heat. It tends to be white with a tinge of yellow. 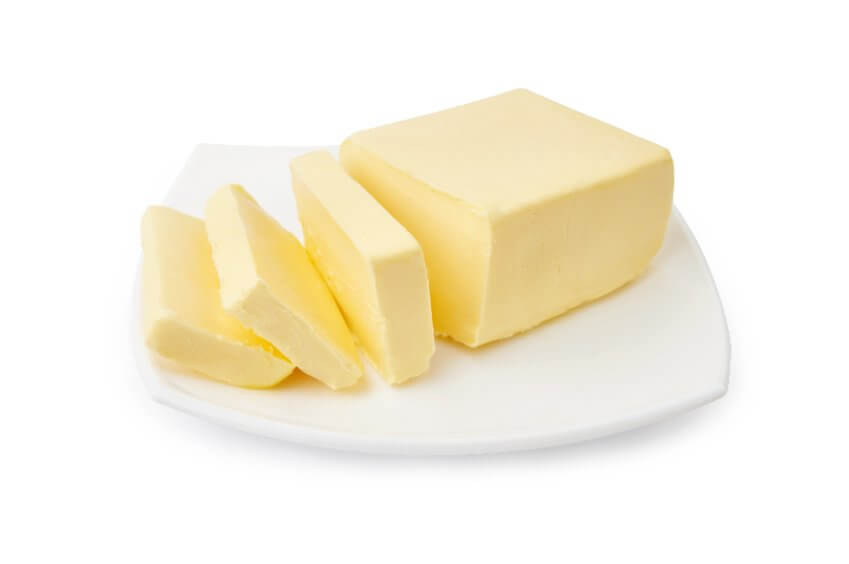 One big difference between butter vs coconut oil is how they’re made. The process of making butter involves pasteurizing cow’s milk by heating it, then collecting the cream that rises to the top afterward and churning it until all of the liquid has been removed.

Butter has a rich flavor that enhances nearly everything you can spread it onto. It also has an emulsifying effect when used in baking recipes, making it an essential ingredient in cookies, cakes, and pastries.

At room temperature butter is solid but soft enough to spread on a muffin or bagel. When exposed to heat, it softens and becomes a runny liquid.

The ways in which butter can be used are countless. They include:

All About Coconut Oil

Coconut oil is often compared with butter as it has many of the same properties. Much like butter, coconut oil is a rich, creamy spread that is solid at room temperature and melts when exposed to heat. This makes it useful as a topping and as an emulsifier when baking. 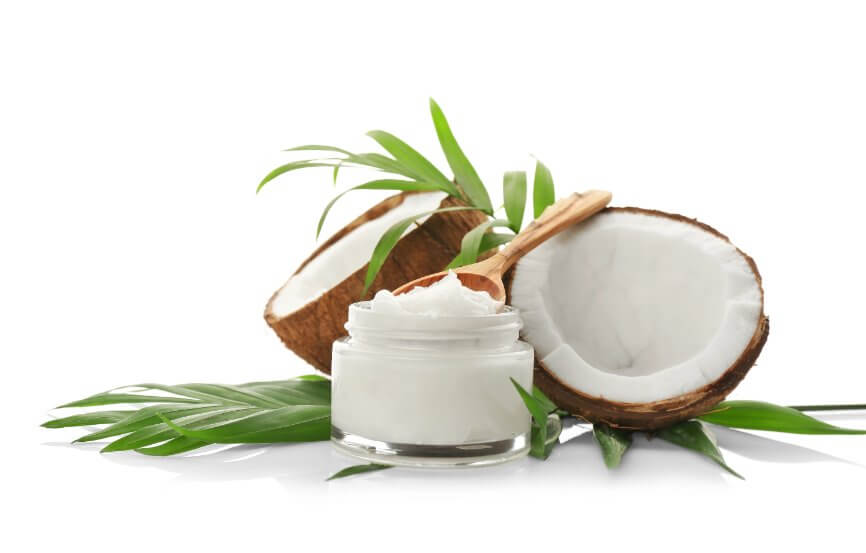 It is made by cold-pressing the white flesh of coconuts to extract the oil. Unlike butter, coconut oil is clear and colorless.

Coconut oil has a very faint coconutty flavor that is barely noticeable. It has a texture and consistency more reminiscent of the oiliness of grease rather than the creaminess of butter.

Coconut oil is used in many of the same ways butter is, including:

Coconut oil is also used in a plethora of non-culinary ways, including:

Coconut oil is also used by some to treat skin conditions, such as eczema and psoriasis. However, there doesn’t appear to be any evidence to support these uses, according to WebMD.

Now that we have a basic understanding of what these two fatty types of spreads are, let’s have a look at some of the differences between butter and coconut oil, starting with nutrition.

The table below compares the nutrition facts of a single 1-tablespoon serving of butter with an equal serving size of coconut oil:

Despite how fundamentally different they are, butter and coconut oil have a surprisingly similar nutrition profile:

That said, there are a few key differences that are worth noting.

Neither butter nor coconut oil contains a significant amount of vitamins and minerals, but butter does have a slight edge here as it contains some.

One example of such would be vitamin A— a fat-soluble vitamin that plays a role in healthy vision, immunity, and reproductive health, according to Mayo Clinic.

Just a 1-tablespoon serving of butter will provide you with 11% of the daily value for vitamin A; compared with coconut oil, which provides none.

Additionally, butter provides trace amounts of other vitamins and minerals, such as:

While butter is certainly not a significant source of these nutrients, it still beats out coconut oil, which contains none of them.

Possibly the most significant difference between butter vs coconut oil is their saturated fat content.

Saturated fat is a type of fat that is solid at room temperature and is classified as a “bad” fat by the American Heart Association.

Butter often gets a bad reputation for being high in saturated fat, which it is. However, substituting coconut oil for butter is like jumping out of the frying pan and into the fire, as it contains roughly 40% more saturated fat per serving!

That said, if you’re looking to avoid saturated fat intake, neither butter nor coconut oil is ideal as they both contain lots of it.

There are two types of unsaturated fats:

Butter wins out here as it contains both mono and polyunsaturated fats. Not only that, it contains more than double that found in coconut oil, clocking in at 4.7g and 2g respectively.

One advantage coconut oil may have over butter is that it does not contain cholesterol.

Cholesterol is a waxy substance found in animal-based foods. The human liver produces its own cholesterol, therefore it is not needed in the diet. In fact, it was once believed that dietary cholesterol consumption negatively impacts heart health. However, the consensus on that appears to be shifting. According to Harvard School Of Public Health, cholesterol may not be as problematic as once thought.

That said, cholesterol is somewhat of a controversial topic, with varying opinions depending on the source.

Nevertheless, if you’d like to err on the side of caution then coconut oil would be preferable as it is a plant-based food, meaning it does not contain cholesterol.

What About Medium Chain Triglycerides (MCTs)?

One of the more commonly-touted benefits of coconut oil would be its medium chain triglyceride (or “MCT”) content.

MCTs are fats that typically originate in coconuts and palm kernel oil, and can are used clinically to nourish ill patients who may be experiencing involuntary weight loss.

They’re also used to treat other ailments as well, such as obesity, seizures, Alzheimer’s disease, and more. However, there is no evidence to support these uses, according to WebMD.

That said, some animal studies have shown that coconut oil may help relieve inflammation and protect from oxidative stress when applied to the skin.

In conclusion, choosing between butter vs coconut oil may simply boil down to preference.

Seeing as how each is high in calories, high in saturated fat, and low in vitamins and minerals, you won’t be missing out on much when choosing one over the other.