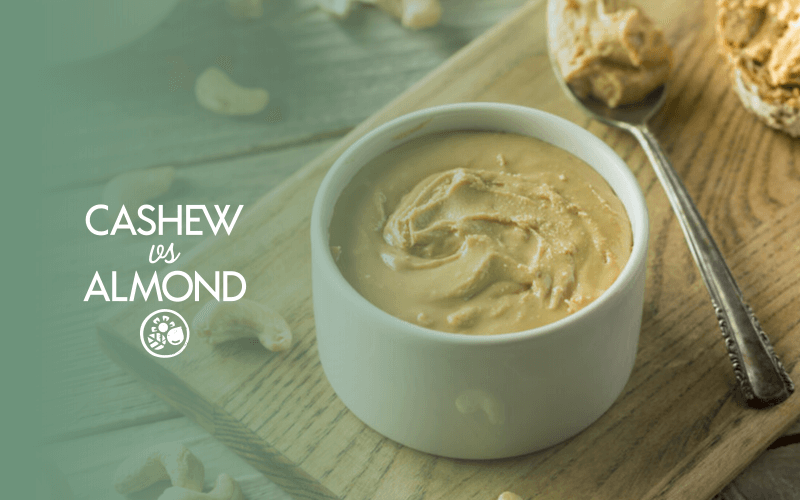 As discussed on this website many times over, there are countless varieties of nut butters to choose from if the peanut variety isn’t your thing, or if you’re simply looking for more nutritious options. Two of the most common types of nut butters are cashew butter and almond butter, but is one more preferable to the other? The cashew butter vs almond butter dilemma is a close call, but almond butter’s numerous benefits makes it a wiser choice. Let’s dig a little deeper to explore why.

Cashew butter is a nut spread alternative to peanut butter.

Much like peanut butter, cashew butter is made from ground nuts. The primary difference though is the nuts used. Cashews that are made into cashew butter are first roasted. Once ground, the result is a rich, nutty spread that consists of ground cashews. The natural oils in the nut give it a creamy consistency.

Although cashew butter may be a little more difficult to find in stores than other varieties of nut butters, it’s still not as rare as some of the more obscure nut butters, like walnut butter for example. Chances are that you will be able to locate cashew butter at a grocery store near you, even if you have to search around a bit.

Unlike almonds, cashews can be eaten raw, meaning you can opt for the raw variety of cashew butter if you’re following a raw diet.

It should be noted that, depending on the brand and variety, cashew butter can sometimes come with added salt and sugar. This can have an impact on the choice you make between cashew butter vs almond butter, so be sure to check the labels on the product packaging if these are important factors for you.

Much like cashew butter, almond butter is also an alternative nut butter that can be used in place of peanut butter, or any other variety.

Almond butter is made of almonds that have been cooked and ground into a creamy spread, thanks to its natural oils.

Because raw almonds can be toxic to humans, the almonds that are used to make almond butter are typically cooked (or roasted) beforehand.

Almond butter is a little more common than cashew butter is, meaning you should be able to locate it in stores with relative ease. Not only that, but you’ll most likely have a variety of brands and flavors to choose from as well.

As is the case for cashew butter, certain almond butters can come with added salt and sugar, so be sure to check the label before purchasing.

Finally, due to the labor costs and resources required to grow and harvest almonds, almond butter can be on the pricey side. This may be something to consider when choosing between cashew butter vs almond butter.

Let’s have a closer look at how these two nut butter alternatives stack up when compared.

The table below compares the nutrition facts of a single serving of both cashew butter and almond butter. Source data is linked in the product name:

As you can see, they’re relatively similar in terms of macronutrients, but the micronutrients and minerals are what mostly sets them apart (nutritionally-speaking, that is.)

Let’s go over some of the benefits of choosing cashew butter vs almond butter.

According to a 2007 study published on PubMed, fat loss depends entirely on an energy deficit [source].

This means that in order for fat loss to occur, you need to consume less energy — or “calories” — than your body uses in a day.

One of the benefits you’ll enjoy when opting for cashew butter over almond butter is that it has slightly less calories per 2 tablespoon serving than almond butter does, making it a wiser choice for someone look to restrict caloric intake.

Another benefit you’ll enjoy when choosing cashew butter is that it has less total fat than almond butter does.

According to recommendations from the Cleveland Clinic, fat intake should be limited to 20% to 35% of your total caloric intake [source].

One of the downsides of eating nut butters of any kind is that they tend to be high in fat. However, cashew butter does have slightly less total fat than almond butter does, making it the better option for anyone looking to reduce their dietary fat intake.

For any athlete looking to recover from their training regimen, protein is important. Protein is responsible for repairing muscle tissue in the body that has been broken down from resistance training, as well as various other metabolic activities [source].

One advantage cashew butter has over almond butter is that it contains roughly 20% protein per serving, giving it a slight edge for athletes and gym enthusiasts everywhere.

This is also beneficial for anyone following a plant-based diet, as protein calories tend to be difficult to come by.

The final advantage you’ll enjoy when opting for cashew butter vs almond butter is that it has significantly more iron content.

In short, iron is responsible for transporting oxygen throughout the body. A lack of iron in the diet can lead to various health complications, such as anemia [source].

According to the National Institutes of Health, it is recommended that adult men consume 8 mg of iron per day, whereas adult women require 18 mg per day [source].

Reaching for that jar of cashew butter will provide you with twice as much iron (per serving) as almond butter contains.

Now that we’ve gone over some of the benefits of cashew butter, let’s examine the various benefits you’ll enjoy when opting for almond butter instead.

The American Heart Association recommends consuming no more than 6% of your total daily calories from saturated fat [source]. This breaks down to 13 grams if following a 2,000-calorie diet.

This also means that almond butter contains more of the desirable poly and monounsaturated fats per serving than your typical cashew butter does.

Sodium is an essential electrolyte that is required to carry out various bodily functions, but traditional Western diets tend to be high in sodium.

According to the American Heart Association, cutting back on sodium intake can reduce your risk of high blood pressure [source].

Although cashew butter and almond butter are both relatively low in sodium, the almond variety does have 20% less sodium per serving.

In terms of an individual serving, a 1 mg difference may not seem like much, but it could be more impactful on a larger scale.

If you’re trying to keep your carbohydrate calories to a minimum then you’ll be happy to hear that almond butter contains roughly 15% less carbs than cashew butter does, making it the wiser choice for your low-carb needs.

What’s more, almond butter has even less net carbohydrates (the result of subtracting fiber grams from carbohydrate grams) thanks to its significantly higher fiber content.

The benefits of consuming more dietary fiber are vast and wide.

According to the Mayo Clinic, adding fiber to your diet can:

One distinct advantage almond butter has over cashew butter is that it contains roughly twice as much fiber per serving, helping you to feel more full and inch closer to your daily fiber intake goals.

As an electrolyte and essential mineral, calcium is required by the body to maintain strong bones and good bone health [source].

When opting for almond butter over cashew butter, you’ll be consuming roughly six times as much calcium per serving, helping you to reach your daily recommended minimums.

Finally, the last benefit you’ll enjoy when reaching for the almond butter instead of cashew butter is that you’ll be consuming significantly more potassium per serving.

Potassium is yet another essential electrolyte that is partially responsible for controlling the electrical pulses in the body.

According to a 1990 study published on PubMed, potassium supplementation helped to lower the blood pressure readings in patients who were consuming normal amounts of sodium [source].

This, combined with its lower sodium content, makes almond butter the better choice over cashew butter.

Now that we’ve gone over some of the pros and cons of cashew butter vs almond butter as it relates to its nutritional content, let’s address an equally important metric — taste!

Seeing as how both nut butters are relatively similar in terms of macronutrients, your decision may come down to flavor.

How Does Cashew Butter Taste?

Unlike almonds, cashews have a very distinct taste and aroma, and it carries over into cashew butter. Cashew butter tastes very similar to cashew nuts.

If you’ve ever snacked on a handful of cashews then the taste of cashew butter will not be unfamiliar to you, especially if it’s the roasted kind, which tends to have a more distinct flavor.

This difference in flavor can have a larger impact when cashew butter is used as an ingredient for baking and various recipes.

How Does Almond Butter Taste?

Although almonds tend to have more of a neutral flavor and aroma when compared to cashews, that almond flavor is a little more recognizable in almond butter. However, it’s still has a much more neutral flavor than cashew butter does, making it a better option for use as an ingredient in baked goods and various recipes.

Finally, it should be noted that almond butter tends to have a grittier texture, whereas most cashew butters have a creamier consistency.

All things considered, the cashew butter vs almond butter comparison may boil down to personal need.

If you’re watching your calories and trying to get more protein in your diet, cashew butter may be the better option. However, if you’re looking to reduce your intake of sodium and saturated fat while also boosting your intake of fiber and various essential electrolytes, you may want to shell out the extra cash for that jar of almond butter.

Regardless of whichever buttery nut spread you choose to go with, make sure to check the nutrition facts label before purchasing to ensure that no undesirable ingredients were added.