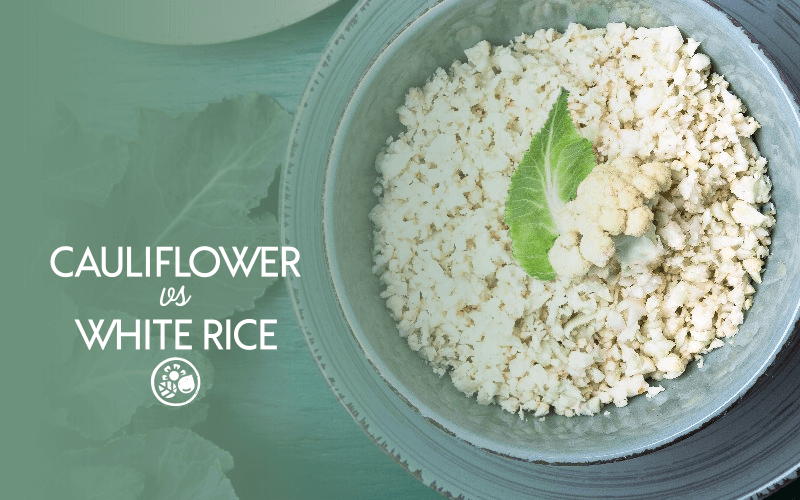 As great as white rice is, it may not always be the best option. There are many varieties of rice and rice substitutes that come with nutritional advantages. One example of such would be cauliflower rice– a rice substitute made by dicing cauliflower florets into little rice-like grains. In this article we’ll be going over all of the differences between cauliflower rice vs white rice so you can compare and make an educated choice between the two.

That said, there are many more differences to be taken into consideration. Let’s have a closer look.

What Is Cauliflower Rice?

The first thing you need to know about cauliflower rice is that isn’t actually rice. Instead, it’s just florets of cauliflower that have been rinsed and diced into tiny rice-like grains:

The result is a grain-like serving of cauliflower that mimics the texture and substance of rice. It’s important not to dice the florets too small though, or else they will become more like mashed potatoes and less like white rice.

Once diced, cauliflower rice can be used raw, in place of white rice. It can also be lightly sautéed in olive oil to create a texture and consistency that is even more similar to white rice.

Now that we have a baseline understanding of what cauliflower rice is, let’s have a look at some of the ways it compares to white rice.

One of the biggest differences between cauliflower rice vs white rice is taste.

White rice is known for its neutral flavor. It’s what makes it such a versatile ingredient, serving as a blank canvas for many culinary dishes around the world.

Cauliflower rice, on the other hand, is not as neutral. Seeing as how it is essentially just chopped-up pieces of cauliflower, it tastes (as you would expect,) just like cauliflower.

This means that cauliflower rice should only be used as a substitute for white rice in recipes and dishes where cauliflower flavor would be a welcomed addition.

Another difference between cauliflower rice and white rice is their storage protocol and expected shelf life.

According to the Minimalist Baker website, cauliflower rice can last in the fridge for a few days, but it will start to develop an unpleasant odor. Cooking it beforehand can reduce this effect, but it’s best when used right away. Otherwise, it can be preserved in the freezer for up to one month.

White rice, on the other hand, can last for up to two years if dry and kept in an airtight container. Once cooked, it can be stored in the fridge for up to four days, or frozen for up to two months.

Those of us with four-legged friends in the house will be happy to hear that cauliflower is perfectly safe for dogs when eaten in moderation, according to the Petco website. In fact, your dog will enjoy many of the nutritional benefits that we stand to gain from eating cauliflower.

Likewise, white rice is also safe for dogs, according to the American Kennel Club. White rice is a common ingredient in many commercial dog foods.

The most noteworthy difference between cauliflower rice vs white rice is their nutritional contents.

The table below compares the nutrition facts for a single 1-cup serving of cauliflower rice with an equal serving size of cooked white rice:

As you can see, there are many nutritional differences between cauliflower rice and white rice. Let’s have a closer look.

Possibly the biggest difference between these two rice varieties is their caloric density.

Calories are the unit of measurement used to gauge the energy we consume and expend, and calorie counting can be a helpful tool for losing weight. According to the Harvard School Of Public Health website, diets that reduce caloric intake result in weight loss regardless of carb, protein, or fat content.

Those looking to minimize their caloric intake will be better served opting for cauliflower rice, as it only contains 25 calories per cup. This is nearly ten times fewer calories than a 1-cup serving of white rice!

Not only does cauliflower rice come with fewer calories, but it’s also lower in total carbohydrates, clocking in at 5.3 grams per serving.

White rice, on the other hand, packs a whopping 53.2 grams of carbohydrates per 1-cup serving– roughly ten times more!

This makes cauliflower rice a popular choice among those following a Ketogenic (or “Keto”) diet– a way of eating characterized by reducing carbohydrate intake in favor of fat and protein.

Fiber is an indigestible carbohydrate that is tasked with removing waste from the body. Its consumption is associated with many health benefits, according to Mayo Clinic. These include lowering cholesterol, maintaining bowel health, controlling blood sugar levels, and more.

Cauliflower rice contains roughly five times as much fiber per serving as white rice, clocking in at 2.5 grams and 0.6 grams respectively.

Potassium is a mineral and essential electrolyte that helps manage hydration in the body and can even help in lowering blood pressure, according to Harvard Health Publishing.

Those seeking to boost their potassium intake will be better served opting for cauliflower rice vs white rice as it contains 303 mg per serving, which is 9% of the Daily Value. White rice, on the other hand, only contains 2% DV for the same serving size.

Cauliflower Rice Is An Excellent Source Of Vitamin C

Vitamin C is an essential nutrient that needs to be obtained through diet as our bodies cannot produce it on their own. It’s a powerful antioxidant with many important functions, according to the National Institutes of Health. These include supporting immune health, collagen production, and iron absorption.

A single 1-cup serving of cauliflower rice will fulfill almost all of your vitamin C needs for the day, coming in at an impressive 77% of the Daily Value!

This is in stark contrast to white rice, which does not contain any vitamin C.

One of the few nutritional advantages white rice has over cauliflower rice is that it contains more protein per serving.

An essential macronutrient, protein helps the body build and repair muscle tissue and can even help burn more calories, according to WebMD.

A 1-cup serving of cooked white cooked contains 4.4 grams of protein per serving, whereas an equal serving size of cauliflower rice only contains 2 grams– not even half.

White rice also contains more iron than cauliflower rice. Iron is a mineral that plays a role in transporting oxygen throughout the body.

If you’re looking to consume more iron then a 1-cup serving of white rice will provide you with 15% of the Daily Value for iron. Cauliflower rice only provides 2% DV.

Cauliflower Rice Is Lower On The Glycemic Index

Another advantage cauliflower rice has over white rice is that it’s much lower on the Glycemic Index.

Cauliflower is a vegetable, and when you eat rice made from that vegetable, you get to enjoy all of its health benefits. One such example would be antioxidants.

According to Healthline, cauliflower contains antioxidants that have been shown to slow the growth of cancer cells. White rice, on the other hand, is a poor source of antioxidants, according to Medical News Today.

In conclusion, the differences between cauliflower rice vs white rice are abundant. They may look similar on the surface, and they may even mimic each other in texture and consistency, but the similarities stop there.

Cauliflower rice packs a greater nutritional punch than white rice and comes with fewer calories, carbohydrates, and a lower GI score to boot. Using it as a substitute for white rice will make your dishes and entrees taste like cauliflower though, so be mindful of how you incorporate it!