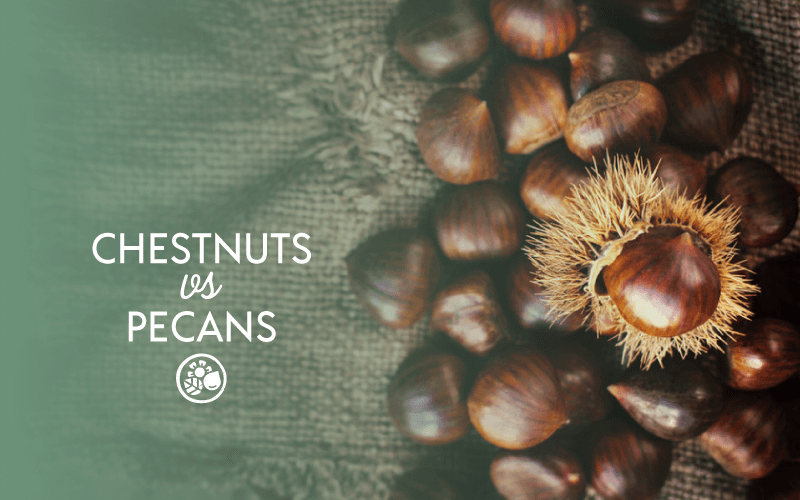 In short, the main difference between chestnuts vs pecans is that chestnuts have roughly one third the calories of pecans. Additionally, they are lower in fat, carbohydrates, and pack lots of vitamin C– a vitamin that pecans only have in trace amounts.

Chestnuts are somewhat of an outlier in the world of nuts. Unlike other nuts, which tend to be high in fat and low in carbohydrates, the opposite is true of chestnuts. Far more of their calories are made up of carbs than they are of fats (and this could explain why they’re so much lower in calories too!) 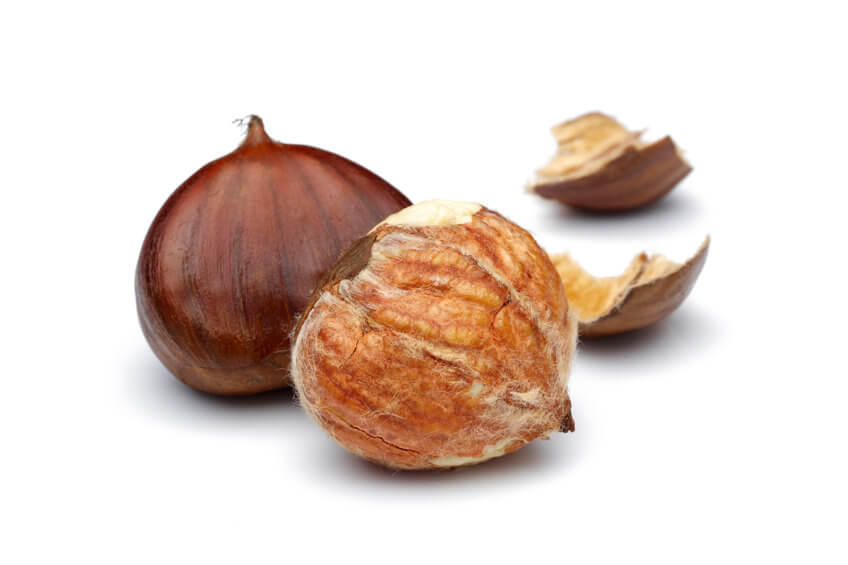 Grown in temperate regions of the northern hemisphere, chestnuts are a tree nut that must be cooked (usually by roasting or boiling) before eating. This is due to the tannic acid content they contain in their raw state, which is believed to cause illness when eaten in excess. This is one of the many differences between chestnuts vs pecans– a nut that can be eaten raw.

When purchased, chestnuts usually come shelled in jars or plastic packaging. They are typically eaten whole as a snack.

Unlike other types of nuts that are hard and crunchy, chestnuts are softer and have more of a meaty texture.

Additionally, they come packed with lots of nutrition and health benefits, just as you would expect from a whole-plant food. According to WebMD, chestnuts can:

Pecans, native to North America, have been a part of the continent’s cuisine for centuries. 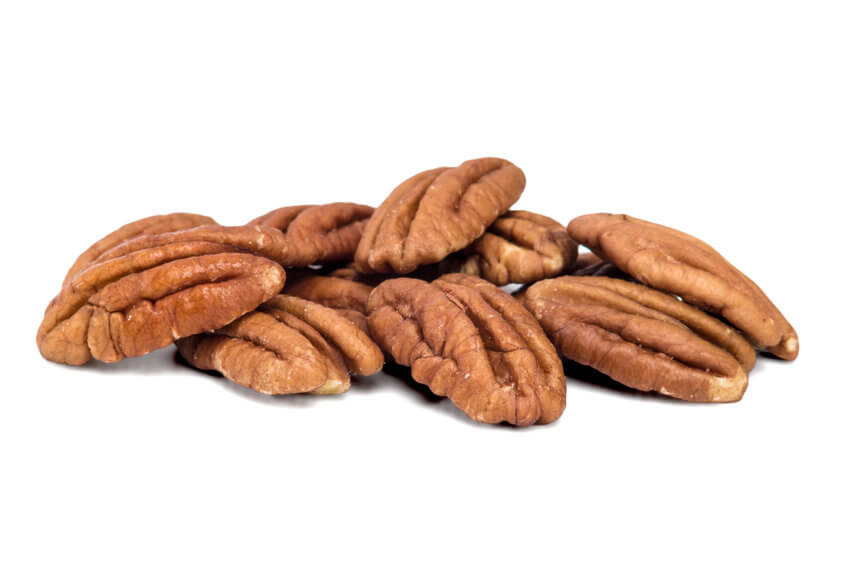 Pecans are also a tree nut, but unlike chestnuts, they can be eaten raw (though we recommend roasting them for the best flavor. Raw pecans can have a bitter taste.)

They are typically sold in one of two forms– either shelled or unshelled. If you purchase them unshelled, you’ll need a nut cracker to get at those tasty insides.

As far as taste and texture goes, pecans are smooth, buttery, and have a rich flavor that is perfect for baking or as a topping on oatmeal, salads, and more. And unlike chestnuts, they have a crunchier texture that is more consistent with other nut varieties.

Like chestnuts, pecans offer many health benefits. According to WebMD, pecans too can help improve heart health. Furthermore, they may reduce cancer risk as well.

Now that we know a little more about the differences between chestnuts and pecans, let’s see how the nutritional contents of these two nuts compare.

The table below compares a single 100-gram serving of chestnuts with a similar serving size of pecans:

As evident, there’s an enormous disparity in calories between these two nuts. This could change how the vitamin and mineral contents are interpreted. Let’s elaborate.

The most obvious difference between these two nut varieties is their difference in calories. An equal weight serving of pecans have nearly three-times as many calories as chestnuts!

Calories are the unit of measurement used to gauge energy intake and are the end-all-be-all when it comes to weight loss. According to Harvard School Of Public Health, reducing calorie intake leads to weight loss regardless of carb, fat, and protein makeup.

This makes chestnuts advantageous because you can eat a greater volume of food for much less calories, which can help you feel satiated longer.

Chestnuts Are Lower In Fat

Another difference between chestnuts vs pecans is that the former is far lower in fat.

This may not be as big of an issue as it would be with other foods, as nuts are usually made up of mostly good fats. They can also contain saturated fat though– the “bad” kind, according to the American Heart Association.

Not only are chestnuts lower in fat, but they’re also lower in saturated fat as well.

Chestnuts Are Packed With Vitamin C

One of the most unique traits about chestnuts (compared to other nuts) is the amount of vitamin C they contain– or that they even have vitamin C at all!

A single serving of chestnuts packs a whopping 43% of the Daily Value. Comparatively, pecans have a meager 2% DV (and that’s despite having nearly triple the calories.)

Vitamin C is a water-soluble antioxidant that can help protect cells from free radical damage and support immune health, according to the National Institutes of Health.

Pecans Are Lower In Carbohydrates

One of the few advantages pecans have over chestnuts are that they’re far lower in carbohydrates.

This can be valuable if you’re following a ketogenic (or “keto”) diet– a way of eating that restricts carbohydrate intake so that the body produces ketones to burn for energy.

The disparity in carbohydrates between these two nuts is profound. Chestnuts pack 53g of carbohydrates per serving, whereas pecans only have 14g (and even less if you subtract the grams of fiber.)

When it comes to vitamins and minerals, the difference between chestnuts vs pecans isn’t as stark when you adjust for calories.

Although chestnuts contains more vitamins C and K, when adjusted for calories, they each have a similar amount of:

Although they have their differences, chestnuts and pecans have some similarities, and it’s important to point these out as they may not be obvious based on how you interpret the data from the nutrition facts table above.

When adjusted for calories, both nuts contain a relatively similar amount of:

By now it should be clear that the differences between chestnuts vs pecans are abundant. In fact, so much so that you could argue that the only thing they have in common is that they’re tree nuts.

As far as nutrition goes, the advantages of chestnuts outweigh that of pecans, but it is all relative to your own personal needs and goals.

Chestnuts may have less calories and fat, but if you’re seeking the option with less carbs, then pecans would be the way to go.