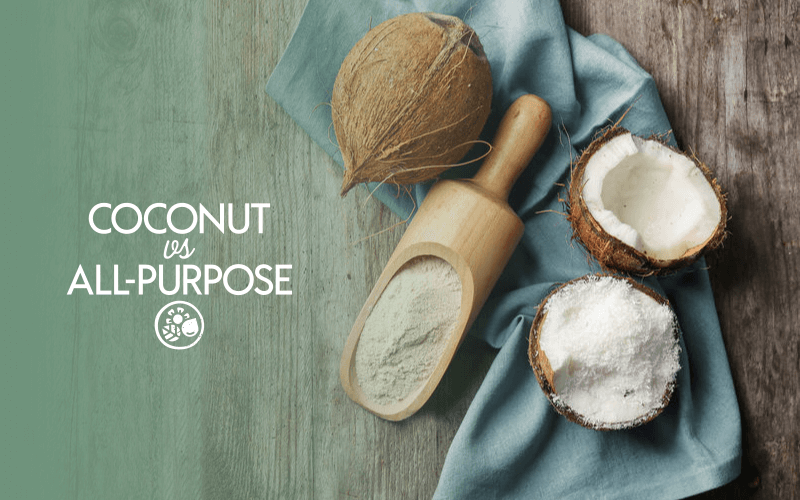 If you’ve been baking with all-purpose flour for as long as you can remember, you might be surprised to encounter a new batch of flour options — namely coconut flour — when you hit up the baking aisle at your local grocery store. You may even wonder if it’s worth considering coconut flour VS all purpose flour as a substitute.

Blends that include a mix of rice flour, potato starch, tapioca starch, xanthan gum, and more can offer up a 1:1 substitute that’s hard to notice in the finished product. But what about simpler options like coconut flour? How does this coconut derivative stack up against classic all-purpose flour?

Is it healthier? Does it offer the same texture and consistency in baked goods? What does it taste like? Does it hold together? Whether you’re suffering from gluten intolerance or you’re simply on the hunt for a healthy alternative to bleached wheat flour, you may be tempted to try coconut flour.

Before you do, you need to know that it’s not the same as your traditional pantry staple. The taste, outcome, and nutritional value can vary, and all of these factors could impact your decision on whether to switch to coconut flour for baked goods or stick to your tried-and-true all-purpose flour.

Here’s what you need to know to make an informed decision when it comes to coconut flour vs all purpose flour.

As you’re probably aware, coconut flour comes from coconuts, and all-purpose flour is derived from wheat. However, when you’re choosing between coconut flour vs all purpose flour, you may need to know a little more.

All-purpose flour comes from wheat, but it is typically different from full wheat flour in a couple of key ways.

First, all-purpose flour is refined. This means that the bran and germ have been removed. While this gives the resulting flour a smoother, less grainy texture, it also eliminates the bulk of the nutritional value associated with the grain. In some cases, nutrients are added back in, resulting in an “enriched” flour.

The second difference is that all-purpose flour is bleached, providing the white appearance that doesn’t add color to baked goods, an essential feature for desserts like white cake, for example.

Bleaching occurs through treatment with chemicals like benzoyl peroxide, chlorine, or potassium bromate that work to speed the aging process and create a finer, softer flour.

Coconut flour, on the other hand, is essentially a byproduct of the creation of coconut milk products.

When coconut meat is compressed to remove every last ounce of coconut milk, the remains are dried and ground into a fine powder that can be used as a substitute for wheat flours in baking.

Coconut flour is a gluten-free product, which some modern consumers prefer (especially people with Celiac disease or some level of gluten intolerance), but is it healthier than all-purpose flour?

Coconut Flour VS All Purpose Flour

Let’s look at how these flours stack up.

One of the reasons why some shoppers are interested in flour alternatives is because of their purported health benefits, but does that argument hold true? We’ll start by checking the nutrition facts:

Coconut flour delivers 20% DV iron (plant-based, natch) and medium-chain triglycerides (MCT) that have been found to boost energy, promote weight loss, and reduce the growth of harmful bacteria, among other potential health benefits. High in fiber, coconut flour ranks low on the glycemic index and can help to aid digestion and keep blood sugar levels stable.

The all-purpose flour contains 8% DV iron, 15% thiamin, 10% riboflavin, 10% niacin, and 20% folate, with most of these things being added to enrich the nutritional value of the product.

As you can see, coconut flour has more sugar – which is no surprise, considering that it comes from fruit, as opposed to a grain. However, all-purpose flour has slightly more carbs and considerably less fiber, reducing the nutritional value.

It also bears mentioning that some bleaching agents used in white flour may be considered to be potentially harmful to your health, particularly potassium bromate, which has been linked to kidney damage and cancer in animal studies and is banned in several countries (but not the U.S.).

Generally speaking, comparing coconut flour vs. all-purpose flour on a purely nutritional basis should cause the average consumer to lean toward coconut flour. However, there are other practical considerations to keep in mind, too.

The debate between coconut flour vs all purpose flour may hinge on health for some people, but when it comes to baking, practical matters like consistency can also play a role.

If you dig your fingers into both flours, you might be surprised to find that the consistency is nearly the same. Both are soft and fine after processing. However, they can differ dramatically when it comes to the end result.

Coconut flour is both denser and drier than other flour types, but it’s also extremely absorbent. This can make it difficult to substitute for all-purpose flour in recipes. A 1:1 substitution will ostensibly turn your normally fluffy biscuits into inedible hockey pucks.

Because coconut flour is gluten-free, it can lack elasticity, so adding an egg for every fourth cup of flour will not only provide much-needed moisture, but it can help with fluffiness and structure, too. You could also experiment with mixing in other GF flours to create an end product that’s closer to what you’d enjoy with all-purpose flour.

If you’ve ever tasted all-purpose flour by itself, you know that it doesn’t have a lot of flavor.

This is typically ideal for baked goods, since you want other flavors (sugar, butter, spices, etc.) to shine.

Coconut flour, as you might imagine, definitely adds a coconutty flavor to the mix that can impact recipes, although the flour is milder in flavor than, say, shredded coconut.

However, adding coconut flavor isn’t necessarily a bad thing. Coconut has long been an appealing ingredient in a wide range of baked goods.

Macaroons (not to be confused with macarons – almond cookie sandwiches with cream in the middle) are a great example.

They’re little more than coconut flake pasted together with sugar and egg whites.

Coconut is also wonderful in cakes and frostings, bars like blondies, and a vast array of pastries.

On the other hand, you might not be keen on a coconut flavor in your basic sugar cookie or vanilla cake recipe. If this is the case, you’re probably better off sticking with reliably bland all-purpose flour or a different gluten-free substitute.

Coconut deftly enhances the flavor of cocoa without competing against it, making it a great addition to a chocolate cookie, cake, or brownie recipe.

When debating coconut flour vs all purpose flour for baking, some of the major elements you’ll want to keep in mind are nutrition, consistency, and flavor.

With some trial and error, you can determine which one will work better in certain recipes.

If you’re keen on health benefits and you like the taste of coconut, there’s nothing to stop you from switching entirely to coconut flour.

If, on the other hand, you want to preserve the classic texture and flavor of certain recipes, all-purpose flour might remain your go-to option.