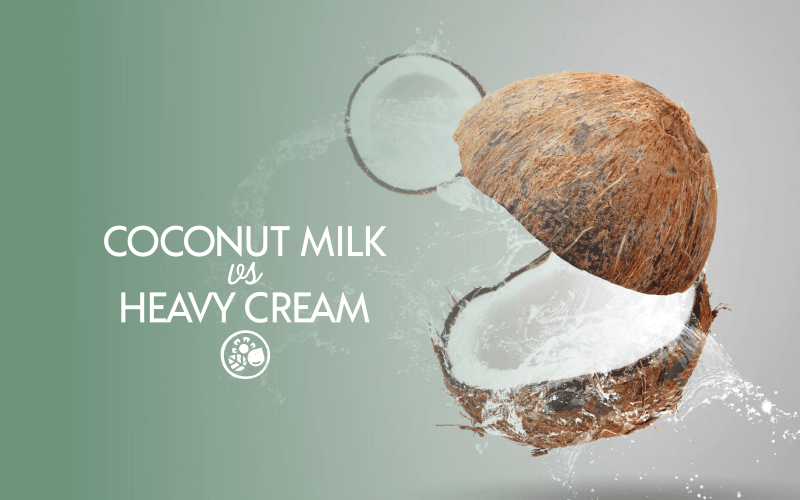 In short, the difference between coconut milk vs heavy cream is that coconut milk is vegan and lactose-free. That aside, they are mostly similar nutritionally. Each contains the same amount of saturated fat per calorie, although heavy cream does contain less sugar and slightly more protein.

That said, there are several other factors that may be worth taking into consideration. Let’s dig in.

All About Heavy Cream

Heavy cream is the fat that rises to the top of fresh milk before it has been homogenized– a process characterized by emulsifying fat droplets into a creamy consistency that does not separate. 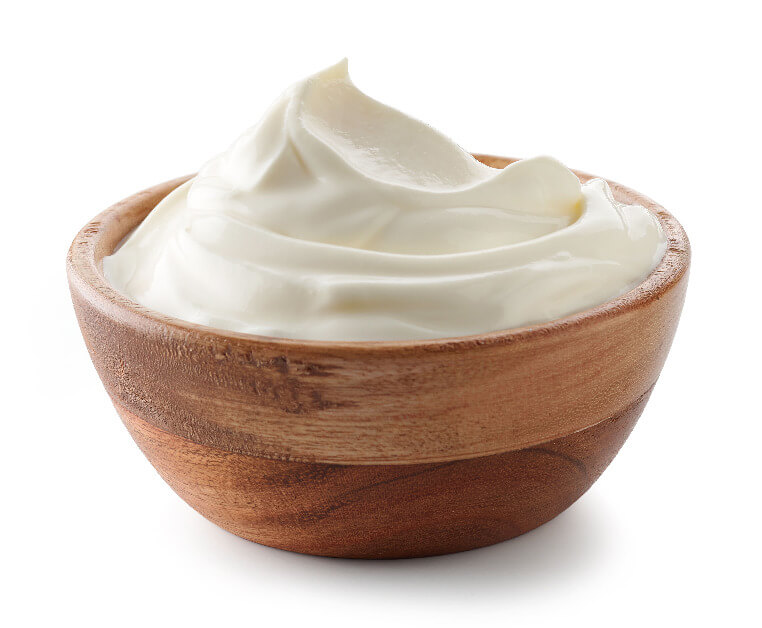 Heavy cream often comes refrigerated in cartons and has countless culinary uses. It is most commonly used to make whipped cream by mixing it repeatedly into a light, airy and spreadable consistency.

Additionally, heavy cream can be used to thicken sauces, make ice cream, and even added to coffee to give it a thicker consistency and richer flavor.

Why Heavy Cream May Not Be The Best Choice

As great as heavy cream is, it is not without its potential drawbacks.

For one, heavy cream contains lactose– a type of sugar found in milk-based dairy products. Lactose can be problematic for those with lactose intolerance— a condition in which milk sugar cannot be properly absorbed by the small intestine, resulting in gas, stomach cramps, and diarrhea, according to Mayo Clinic.

Those who wish to enjoy the creamy richness of heavy cream, but cannot for whatever reason, are not without options. As it turns out, coconut milk can make for an excellent alternative to heavy cream.

Coconut milk is the creamy byproduct of pressed coconut flesh that has been mixed with hot water and filtered through a cheesecloth. The result is a creamy liquid that is similar to heavy cream. 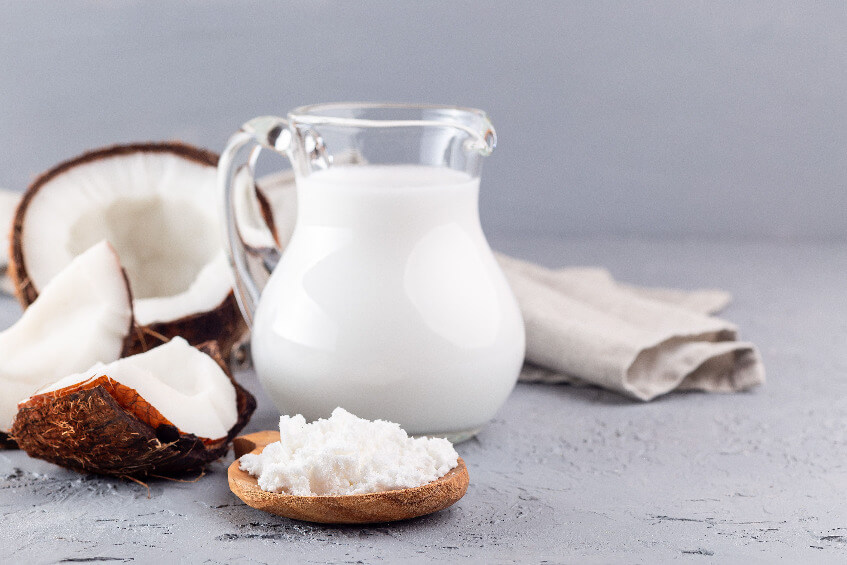 How To Substitute Coconut Milk For Heavy Cream

Coconut milk often comes at room temperature and in a can. Because it has more of a liquid consistency than heavy cream, it requires some light processing before it can be used as a 1:1 substitute.

To make coconut milk match heavy cream in terms of consistency, you first need to separate the fat from the rest of the liquid. This is done by placing the can of coconut milk in the refrigerator for 1-2 days, which will cause the fat to separate from the liquid and rise to the top.

The fat can then be removed from the rest of the liquid and whipped into coconut whipped cream, the same way you would with heavy cream. The following YouTube video from the “Downshiftology” channel demonstrates how this can be done:

The result is a delicious plant-based whipped cream that does not contain lactose.

Now that we’ve gone over the practical differences between coconut milk and whipped cream, let’s have a look at how they compare nutritionally.

The table below compares a 4-ounce serving of Goya coconut milk with a 1-tablespoon serving of Horizon Heavy Cream.

The serving sizes were adjusted so that their caloric content is equal. This is to compensate for the coconut milk’s change in nutritional value once the water is removed and its fat refined:

As you can see, both coconut milk and heavy cream share a lot of nutritionally. The most striking similarity would be their saturated fat content– a “bad” type of fat that can raise LDL cholesterol levels, says the American Heart Association.

That said, these two creamy substances do have some nutritional differences that may be worth considering. Let’s examine.

Heavy Cream Is Lower In Carbohydrates Than Coconut Milk

Possibly the greatest nutritional advantage that heavy cream has over coconut milk is that it contains fewer carbohydrates.

This can be advantageous for those following a low-carb, or Ketogenic diet— a way of eating where carbohydrate calories are displaced with fat and protein calories.

For those following a Keto diet, heavy cream would be preferable over coconut milk.

Heavy Cream Does Not Contain Sugar

Not only does heavy cream contain fewer carbohydrates than coconut milk, but it also contains no sugar.

Seeing as how coconut milk comes from the flesh of the coconut fruit, it makes sense that there is some naturally-occurring sugar found within it. For those looking to minimize their intake of sugar, however, heavy cream is clearly the wiser choice.

Protein is the building block of life. It helps build and repair muscle tissue, and can even help boost metabolism.

While neither coconut milk nor heavy cream are particularly good sources of protein, it is worth noting that the latter contains roughly three times as much protein, clocking in at 1 gram per 1-tablespoon serving.

Coconut milk, on the other hand, only contains 0.3 grams for a similar serving size when controlled for calories.

One advantage that coconut milk has over heavy cream is that it contains less total fat per serving when controlled for calories. Seeing as how they each contain the same amount of saturated fat though, this just means that heavy cream contains more of the “good” unsaturated fats.

That said, if your goal is to consume as little total fat as possible, coconut milk would be the advantageous choice here.

Trace Amounts Of Vitamins And Minerals

Finally, coconut milk comes with trace amounts of vitamins and minerals not found in heavy cream, including:

It should be noted, however, that the quantity of these nutrients found in a single 4-ounce serving of coconut milk is minimal. Certainly not enough to reach your daily needs.

Another potential advantage that heavy cream has over coconut milk is that it’s lower on the Glycemic Index.

The Glycemic Index is a useful tool for helping diabetic patients manage their blood sugar levels.

As it turns out, coconut milk has a GI of 97, whereas heavy cream has a GI of 0. This means that for those seeking the lower-G.I. option, heavy cream is clearly the winner.

Nutrition isn’t the only factor to take into consideration when comparing coconut milk vs heavy cream. Storage and shelf life may be of concern if shelf space is at a premium.

Seeing as how heavy cream is a milk-based dairy product, it requires refrigeration at all times, and it usually will not last as long as coconut milk, with an average shelf life of roughly 1 month once opened.

Coconut milk, on the other hand, usually comes canned and at room temperature. If left unopened, it can last for up to 5 years! Once opened, however, it will need to be refrigerated and will only last up to 10 days before going bad.

Those of you with four-legged friends in the house may want to consider how pet-friendly these ingredients are before stocking your shelves with them.

According to the RSPCA website, coconut-based products (such as coconut milk) should not cause harm to pets in moderation. However, due to the high potassium content of coconut water, it is not recommended to let your pets have any of the liquid that remains after separating it from the coconut milk’s fat.

Dairy-based milk products, such as heavy cream, are also not toxic to dogs, says the Rover.com website. However, it should be noted that some dogs (much like humans) suffer from lactose intolerance and may experience digestive discomfort when consumed.

In conclusion, the nutritional differences between coconut milk vs heavy cream seem to favor the latter, with heavy cream containing fewer carbohydrates, less sugar, and more protein. It also comes with the benefit of having a lower GI score.

If you’re looking for a vegan and lactose-free alternative with a greater shelf life though, then coconut milk is an excellent option. Those seeking an even better alternative may find oat milk to be an even more appealing option.