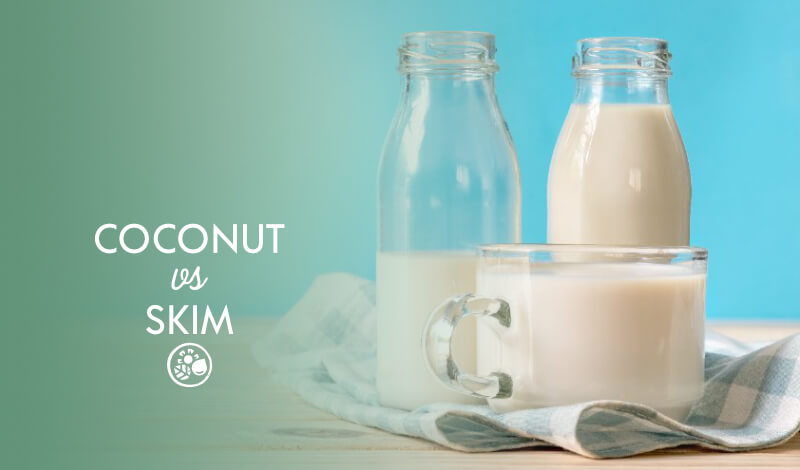 Those looking for a healthier alternative to traditional whole-fat milk have no shortage of options to choose from. Whether it be plant-based milk alternatives (such as coconut milk) or fat-free dairy milk (such as skim milk,) choosing one of the other can be overwhelming. In this article we’ll aim to make this choice a little easier for you as we compare coconut milk vs skim milk in full detail.

In short, the difference between coconut milk vs skim milk is that coconut milk is vegan, keto-friendly, does not contain lactose or cholesterol, and contains half as many calories as skim milk per serving. Skim milk, on the other hand, contains less saturated fat and packs more protein.

That said, there’s a bit more to explore between these two milk products. Read on for a closer examination.

What’s The Deal With Coconut Milk?

Coconut milk is a plant-based milk alternative that is made by pressing the mature flesh of coconuts to extract their liquid. The byproduct is a smooth, milky-white liquid with a creamy consistency. 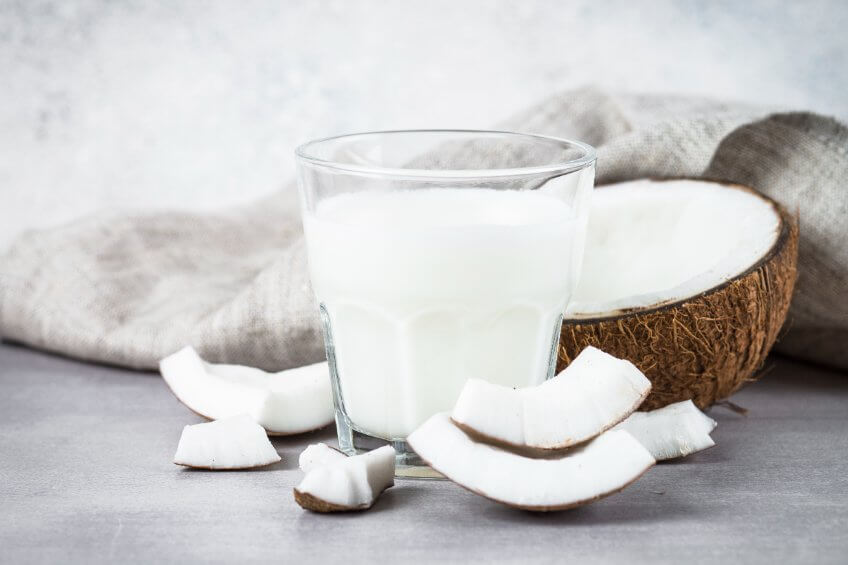 Most plant-based milk products are used as an alternative to dairy milk. This is true for coconut milk as well. However, coconut milk serves many other purposes aside from adding it to coffee, teas, and cereal.

Some of the ways in which coconut milk can be used include:

Coconut milk is one of the preferred milk products when making mixed drinks as its higher fat content prevents it from curdling when mixed with higher-proof alcohols and citrus juices, according to Thrillist.

Possibly the biggest difference between coconut milk vs skim milk is the flavor. Coconut milk tastes, as you would guess, like coconuts.

This separates it from other types of plant-based milk alternatives, such as oat milk and almond milk, which aim to keep a neutral flavor that is more consistent with dairy milk.

This means that using coconut milk in place of dairy milk in coffees, teas, and recipes is that it will add a coconut flavor to whatever it’s mixed with. This can be either desirable or undesirable based on your preferences.

When it comes to storage, both canned and carton varieties of coconut milk should be refrigerated after opening, according to the “Does It Go Bad?” website. It will last 5-10 days once it is opened.

While skim milk always comes refrigerated, some brands of coconut milk are sold at room temperature. That said, it’s important to note that if the brand you purchased came refrigerated then it should remain refrigerated. Look for instructions on the product’s label for further clarification.

As far as pet safety goes, a little bit of coconut milk is not toxic to dogs and may even have some health benefits, according to Rover.com. However, they recommend that it only be consumed in moderation due to additives and sugar content.

What About Skim Milk?

Skim milk is a type of dairy milk that has had its cream (fat) removed. This results in a lower calorie, fat-free product. 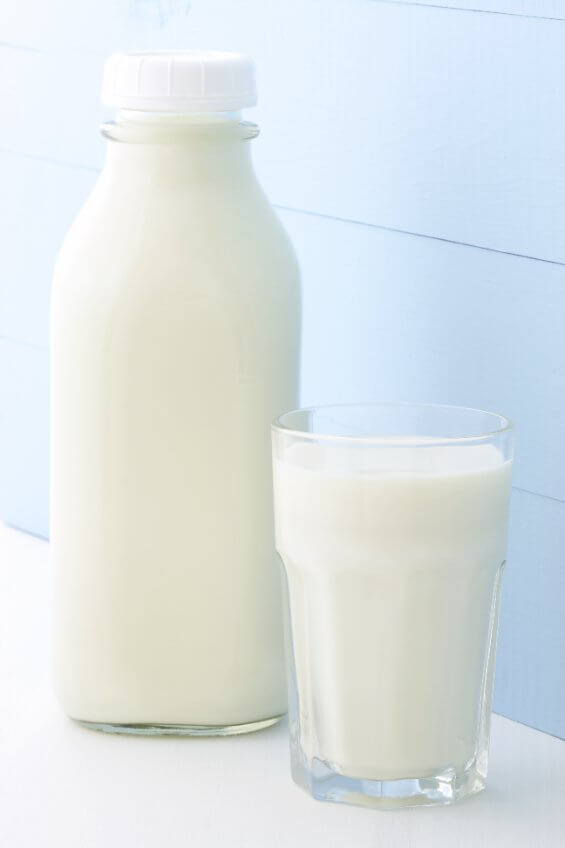 While most consumers are familiar with skim milk, they may not know all of the different ways it can be used or what its benefits are. Let’s take a closer look.

Skim milk can be used for:

Skim milk has a lighter flavor than whole milk, but it is still distinctly a dairy product. This is due to it still containing lactose, which is a natural sugar found in the milk of mammals.

Dairy products such as skim milk usually come with an expiration date printed on them. However, Eat By Date claims that milk can last 7 days beyond its expiration date if stored properly.

According to CanIGiveMyDog.com, skim milk is generally safe for dogs. However, some dogs may be more sensitive to lactose than others. Those that are may experience gas and/or vomiting.

Now that we have a fundamental understanding of what coconut milk and skim milk are and how they’re typically used, let’s have a look at how the two compare with each other.

Coconut Milk Does Not Contain Lactose

One of the biggest differences between coconut milk vs skim milk is that coconut milk does not contain lactose.

Lactose is a type of sugar that occurs naturally in the milk of mammals. Not just cows, either. Goats, and even humans, produce lactose in their milk.

For those who may be lactose intolerant, plant-based milk alternatives (such as coconut milk) are preferable.

Another trait of coconut milk that may be an advantage to some is that it is vegan. Or in other, it does not contain animal products, nor is it produced by animals.

Veganism is an ethical way of eating that aims to reduce the harm and suffering of sentient beings, such as cows.

Birthing cows have their babies (or calves) taken from them so that their milk can be collected for human consumption. Opting for coconut milk instead is one way to reduce the suffering of mother cows and their babies.

Let’s have a closer look at how coconut milk and skim milk compare nutritionally.

The table below compares the nutrition facts of a 1-cup serving of Silk unsweetened coconut milk with an equal serving size of skim milk:

As you can see, both milk varieties are quite different in terms of nutritional content. They each have advantages and disengages associated with them. Let’s examine them a little more closely.

Coconut Milk Contains Half As Many Calories Per Serving

The biggest nutritional difference between coconut milk and skim milk is the caloric content.

Calories are used to measure the energy we consume and expend and are an important tool in managing one’s weight, according to Mayo Clinic.

The brand of coconut milk surveyed for this comparison contains less than half as many calories as skim milk, clocking in at 40 calories and 85 calories respectively.

Coconut Milk Does Not Contain Cholesterol

Another potential advantage coconut milk may have over skim milk is that it does not contain dietary cholesterol.

Cholesterol is a waxy substance found in animal-based food products. The human liver produces its own cholesterol, however, meaning it is not an essential nutrient. UCSF Health recommends that those with risk factors for heart disease limit cholesterol intake to less than 200mg per day. Those without risk factors can have up to 300mg per day.

While coconut milk does not contain any cholesterol, it should be noted that skim milk only contains a meager 4.9mg per cup, which is well within the recommended limits.

Additionally, coconut milk also contains fewer carbohydrates and sugars. This can be advantageous for those following a ketogenic (or “keto”) diet. The keto diet aims to reduce carbohydrate calories and displace them with protein and fat calories.

If limiting carbohydrate intake is a priority for you then coconut milk is clearly the winner here as it only contains a paltry 2 grams of carbs per serving, compared with the 12.5 grams found in skim milk.

The only exception here would be potassium, which skim milk contains roughly 25% more of per serving. Potassium is an essential mineral and electrolyte that plays a role in managing fluid balance in the body and can even lower blood pressure, according to Harvard Health Publishing.

Another advantage skim milk has over coconut milk is that it contains significantly less fat per serving. Not only that, but it contains less saturated fat as well.

Saturated fat is a “bad” kind of fat that contributes to elevated LDL cholesterol levels and may increase the risk of heart disease and stroke, according to the American Heart Association.

If saturated fat is of concern to you then opting for skim milk over coconut milk would be preferable as it only contains 0.3 grams per cup, compared with the 4 grams found in a cup of coconut milk.

Possibly the biggest advantage that skim milk has to offer over coconut milk is that it packs a whopping 8.4 grams of protein per cup!

Protein is an essential macronutrient that the body uses to build and repair muscle tissue. It can also help you burn more calories, says WebMD.

Coconut milk does not contain any protein per serving.

As we’ve gone over in this article, the differences between coconut milk vs skim milk are stark, and choosing one over the other is simply a matter of what your own goals and preferences are.

Those seeking to avoid lactose and cholesterol while minimizing caloric intake would be better serving opting for coconut milk. However, if getting more protein while keeping saturated fat intake as low as possible is your aim, then skim milk would be the better choice.

Continue Reading
link to Tomatoes VS Tomatillos: Why They're So Different

Based on its appearance, the tomatillo could easily be mistaken for an unripe tomato. That is because tomatillos, much like tomatoes, are small, green, and bulb-shaped with a smooth shiny surface. As...