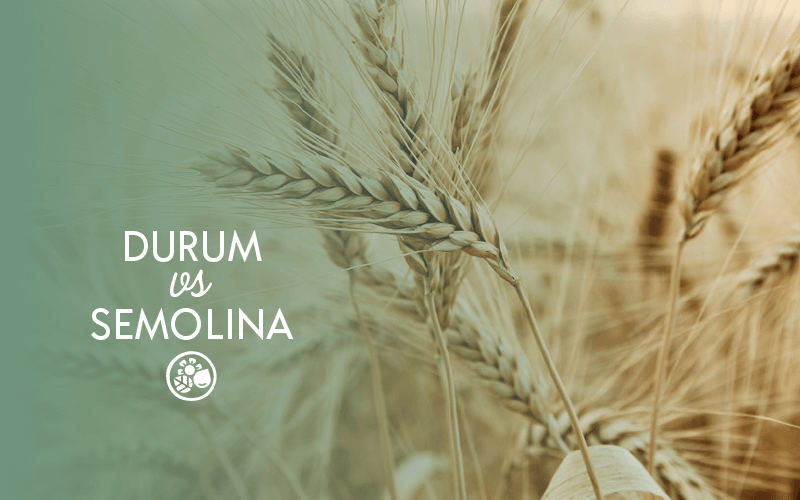 The world of grains and flours can seem daunting if you aren’t familiar with all of the different varieties that exist. There’s no shortage of wheat-based (and non-wheat-based) flours and meals to choose from. In this article, however, we’ll be focusing on that of the durum variety. Seeing as how semolina comes from durum wheat, you may be wondering if there’s even a difference between durum wheat vs semolina. Let’s iron out these details.

In short, the difference between durum wheat vs semolina is that semolina is a byproduct of durum wheat that has been milled and separated into a coarse flour. The resulting endosperm (or “semolina”) has a higher gluten content, which is ideal for helping breads and pastas retain shape when cooked.

Let’s have a closer look at this.

What Is Durum Wheat?

Durum wheat is one of many wheat species in the world. It is the second-most popular wheat variety and refers to a wheat grain that is harder than other grains due to its high protein content.

The protein in durum wheat is known as gluten, and gluten has a binding, gelatinous effect when used as a baking ingredient. This makes it ideal for breads, pastas and doughs, seeing as how it helps maintain shape once cooked. It also promotes rising when combined with yeast.

When harvested, the wheat and germ are separated from the starch during the milling process. This is where the difference between durum wheat vs semolina truly begins. 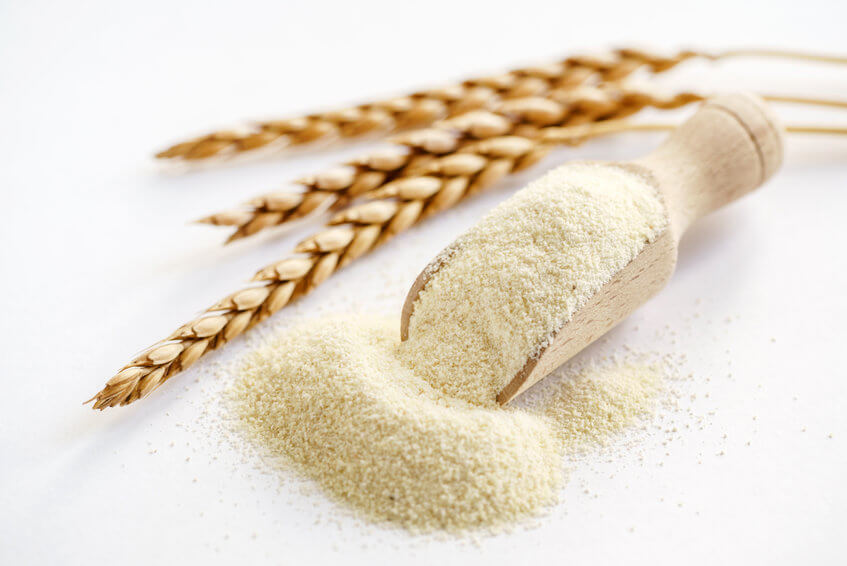 Semolina is a byproduct of the milling process that durum wheat goes through.

Once milled, the bran and germ are separated from the starch (or “endosperm”,) also known as semolina. The semolina is then pulverized further into a fine, coarse powder, known as “semolina flour” (although its coarse texture makes it feel more like sand and less like flour.)

This endosperm (or “semolina”) contains even higher levels of gluten because it is essentially a concentrated form of durum wheat. This is what helps breads and pastas keep their shape when cooked.

Semolina is typically used to make pasta, breads and doughs, but it can also be used for:

So, What’s The Difference Between Durum Wheat VS Semolina?

Seeing as how semolina is a byproduct of durum wheat, they are, for all intents and purposes, the same food. The only difference is the refining process, which removes the bran and germ. This also impacts the nutritional breakdown, though.

Although durum wheat is mostly used for producing semolina, it can also be ground whole into what’s known as durum whole wheat flour (this is not to be confused with regular whole wheat flour, though, which tends to be made using red wheat instead of durum.)

The table below compares the nutrition facts of a 100-gram serving of both durum whole wheat and semolina:

As evident in the data, the nutritional differences between durum wheat vs semolina are negligible at best. They both have a similar amount of calories, carbohydrates and protein. However, there are some differences in their vitamin and mineral contents.

Possibly the greatest difference between durum wheat vs semolina is that whole durum wheat contains significantly more vitamins and minerals.

Semolina does contain these nutrients in trace amounts, but when taken in its whole wheat form, durum contains as much as four-times these nutrients!

The reason for this is because semolina is a refined flour (meaning it has elements removed,) whereas durum is a whole grain, and a whole grain will always contain more nutrients than it will once part of it has been stripped away via milling.

Semolina Is Better For Baking

Although whole durum wheat is more nutritious, semolina flour is ideal for use in baking and recipes. This is because the flour is more refined and consistent.

Essentially, the milling process removes the unwanted elements from the durum wheat for the specific purpose of creating a flour with concentrated amounts of gluten.

So there you have it! The difference between durum wheat vs semolina is that they both come from the same grain, but one is a whole grain whereas the other is a refined flour.

Is one better than the other? It depends. Nutritionally-speaking, whole durum wheat certainly contains more vitamins and minerals (but that doesn’t mean that semolina doesn’t pack a nutritional punch too, being an excellent source of fiber and protein.)

As far as baking and recipes go, sure, you can bake with whole durum wheat. However, the texture consistency, and gluten in semolina flour makes it a superior ingredient.