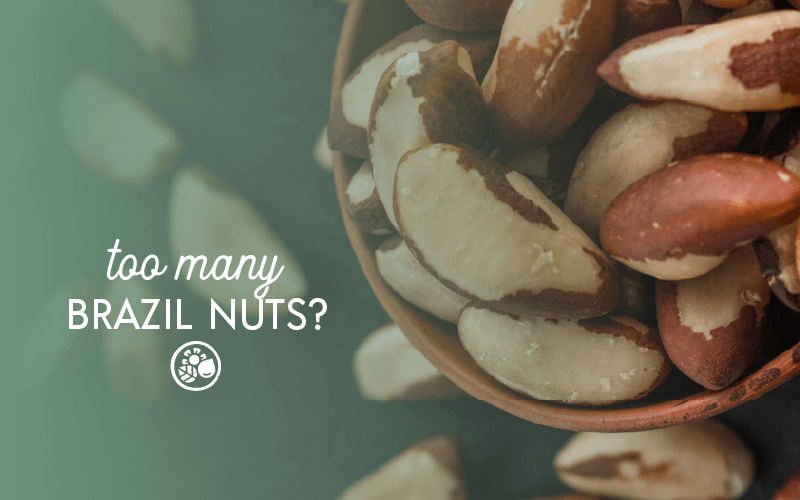 Who wouldn’t be intrigued by an exotic nut that grows in the Amazon rainforest of Brazil? After all, nuts are some of the healthiest foods we can eat, right? You would think so, but this isn’t necessarily true for all nuts. In this post we’ll be going over the consequences you may face if you eat too many Brazil nuts.

In short, eating too many Brazil nuts may cause you to over-consume Selenium — a mineral that is beneficial in moderation, but toxic when over-consumed. According to the National Institutes of Health, the daily upper limit for selenium in adults is 400 mcg. Just a single Brazil nut contains 96 mcg.

Let’s elaborate on this a bit and go over some of the other potential downsides of eating Brazil nuts as well.

Brazil nuts aren’t actually nuts — they’re technically seeds of large trees that are native to the Amazon rainforest. They come in a tough outer shell that needs to be cracked or shelled in order to extract those nutrient-dense inner kernels. 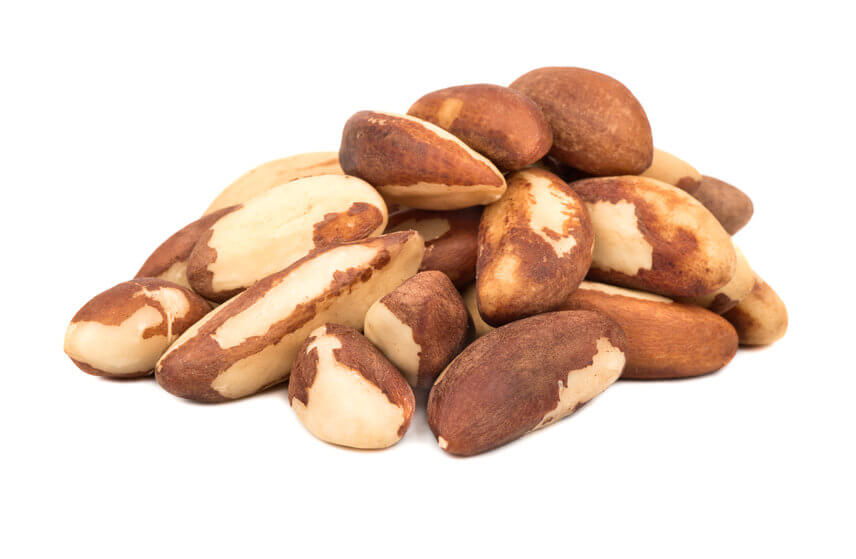 Known for their nutritional density, Brazil nuts are often consumed by the health-conscious. They come packed with fiber, plant-based protein, antioxidants and minerals.

In terms of nutrition facts, a single 1 oz serving of the “I’m A Nut” brand of raw Brazil Nuts — the most-reviewed Brazil nut product on Amazon.com — contains the following:

Additionally, Brazil nuts are also consumed by those who may be seeking to boost their daily intake of selenium — a mineral found in soil.

Selenium is an essential trace mineral that’s important for many functions in the body, including DNA production, thyroid function and reproduction.

While selenium is found in many foods, Brazil nuts are one of the best dietary sources. That’s because they contain high concentrations of selenium due to the fact that their trees are grown in soils that are naturally rich in this mineral.

According to Healthline, just a single Brazil nut contains 96 mcg of selenium — more than the daily recommended amount for all ages, according to the National Institutes of Health.

Although selenium can promote good health when consumed modestly, it could potentially lead to health complications if over-consumed. And this may be easy to accomplish if you eat too many Brazil nuts.

According to the National Institutes of Health, the daily upper limit for adults is 400 mcg of selenium per day.

So, What Happens If You Eat Too Many Brazil Nuts Then?

Considering that a single Brazil contains enough selenium to reach the daily recommended amount for all ages, and just 5 Brazil nuts provide more selenium than even adults need, let’s have a look at what may happen if you over-indulge.

According to the National Institutes of Health, consuming too much selenium over time can cause:

Additionally, more severe problems could arise if left unchecked; including tremors, difficulty breathing, and more, according to NIH.

Saturated Fat: The Other Problem

Another thing to be mindful of if you eat too many Brazil nuts is the amount of saturated fat they contain.

Saturated fat is a type of dietary fat that is typically solid at room temperature. Common sources of saturated fat include red meat, dairy, refined oils, and butter.

According to Mayo Clinic, too much saturated fat can lead to elevated LDL cholesterol levels in the blood, which could elevate the risk of heart disease and stroke.

The American Heart Association recommends getting 5% to 6% of your caloric intake from saturated fat. This breaks down to roughly 6.5g of saturated fat for every 1,000 calories you consume.

While Brazil nuts aren’t as high in saturated fat as some other types of nuts (such as macadamia nuts) they’re still relatively high.

In fact, a single ounce of Brazil nuts contains 19 grams of fat — 4.5 of which are saturated. This means that just a couple of handfuls of Brazil nuts could be enough to put you over your daily limit.

Brazil Nuts Are Dense In Calories

Another overlooked problem when it comes to eating too many Brazil nuts is just how calorically-dense they are. This is true for most nuts, and the Brazilian variety are no exception.

Calories are the unit of measurement for the energy we consume and expend. Weight loss is the result of consuming less energy than our body uses in a day, whereas consuming more calories than our body can use leads to weight gain.

In fact, a 2007 study published to PubMed concluded that fat loss depends entirely on being in an energy deficit. Calories are how we quantify our energy consumption.

Just a single serving of Brazil nuts packs 190 calories. This may not seem like a lot, but considering just how small a quantity it really is (in volume,) it wouldn’t take much to find yourself eating them by the handful without realizing just how many calories you’re consuming.

This suggests that if you’re trying to lose weight, Brazil nuts may be more hindrance than helpful, especially if you eat too many of them.

That’s not to say that you can’t lose weight while eating Brazil nuts, of course; but if you’re seeking to eat as much food as possible while staying within a certain caloric range, there are much better options.

Although Brazil nuts come packed with various nutrients and minerals, there may be repercussions to face if eaten in excess.

This is true for most foods, but Brazil nuts are unique because of how small a serving it takes to exceed the daily upper limits of selenium and saturated fat. This may make you question whether or not this is the sort of snack item you’d like to have sitting around the house. If not for your own sake, but for the sake of anyone else in the home who may see them and grab a few handfuls, not knowing exactly what they’re eating.

If these are of concern to you then you may be better served reaching for other alternatives (such as pine nuts) instead.