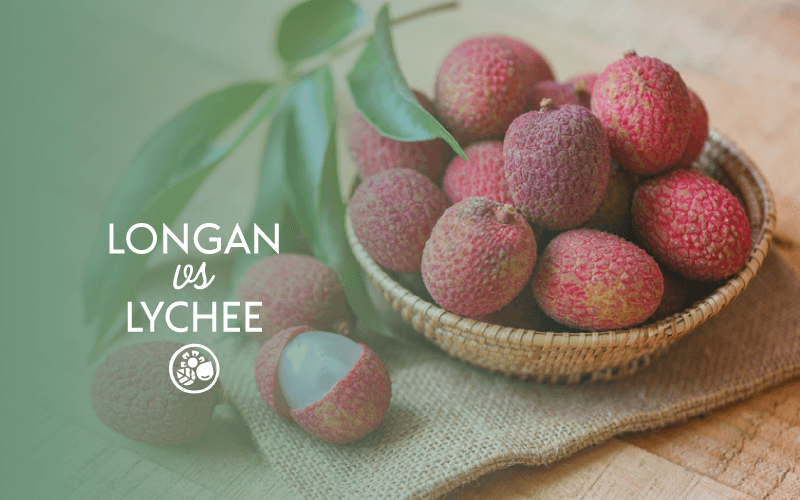 Longan and lychee fruits are very similar in many ways. Both are exotic, tropical fruits that belong to the same family, and they each have a tough outer skin that must be peeled away to reveal the editable inner flesh. They even have a similar nutrition profile. That said, there are a few minor differences between longan vs lychee, and in this article we’ll be exploring them in greater detail.

In short, the difference longan vs lychee is that longan fruit has less calories and more protein, vitamin C, and potassium than lychee fruit. Their outer skin also differs in appearance. The skin of longan is brown, smooth and speckled; whereas lychee is reddish and knobby in texture.

Continue on to learn more about their differences.

What Is A Longan?

Longan fruit is native to Southeast Asia and is closely related to the lychee, having come from the same family.

It’s technically classified as a drupe, which means that it has a hard outer shell that encases a soft inner flesh. The outer shell of longan is dark brown and often speckled; whereas the inner flesh is a translucent white with a small black inedible seed in the center.

Longan fruits are typically about the size of a large grape and have a slightly sweet taste. When eaten fresh, they have a delicate flavor that has been described as being similar to a cross between a grape and a pear.

What Is A Lychee?

Lychees are also native to Southeast Asia and, like longans, belong to the same family. They too are classified as a drupe and have a hard outer shell that encases a soft, fleshy inner fruit. At the center is a large seed that is sometimes referred to as a “chicken tongue”. 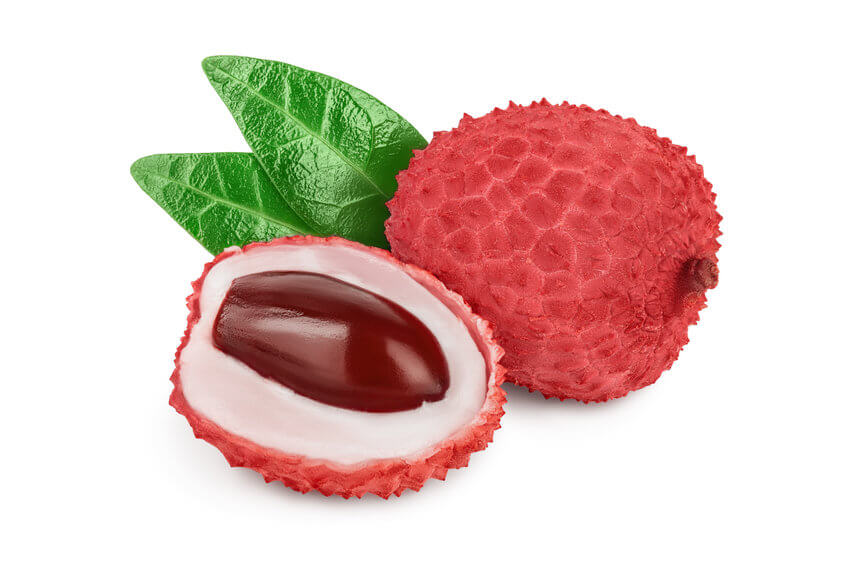 One of the biggest differences between longan vs lychee would be their skin. Unlike longan fruit, the outer shell of lychee is reddish-brown and covered in small bumps.

The inner flesh, however, looks quite similar to that of a longan fruit in that it is a translucent white. The taste and texture can be described as very juicy with a slight floral aroma.

Lychees are typically smaller than longans, with an average diameter of about 1-2 inches (2.5-5 cm). They also have a sweeter taste than longans.

Longan VS Lychee: How They Differ

Now that you’ve been briefed on each, let’s have a look at all of the ways in which they differ, starting with nutrition.

The table below compares the nutrition facts of a 100-gram serving of longan with an equivalent serving size of lychee:

As you can see, these two fruits have more commonalities than differences. They’re nearly identical in nutrition. However, there are a few minor differences that may be worth noting.

The first subtle difference between the two would be their calorie count. A 100-gram serving of longan contains 9% fewer calories than lychee does.

It should be noted, however, that these measurements were taken in terms of weight. Certain factors (such as water content) could impact the nutritional density of the fruit.

That said, calories are an important tool as they allow you to gauge how much energy you’re consuming, and if optimizing your diet so that you were eating foods with the least amount of calories, then longan fruit has a slight advantage here.

Another nutritional difference between the two would be their protein content.

An essential macronutrient made of amino acids, protein is responsible for building and repairing muscle tissue. It may even impact your metabolism due to its higher thermal effect.

While neither longan nor lychee are a particularly good source of protein, it is worth noting that longans have roughly 34% more protein per serving than lychees do– and that’s despite having fewer calories.

This difference could be more profound if the fruits are consumed in large quantities.

An essential electrolyte and mineral, potassium serves many processes in the body. It helps control the electrical pulses in the body, manage fluid balance, and muscle contraction; and can even help reduce blood pressure, according to Harvard Health Publishing.

Those seeking to add more potassium to their diets would be better served opting for longan vs lychee, as they contain 266 mg of potassium per serving, compared with 171 mg found in lychee.

This means that longans contain roughly 36% more potassium than lychees do.

Both longans and lychee are excellent sources of vitamin C. However, this is another area where longan fruit shines just a little brighter, as a 100-gram serving packs 93% of the Daily Value.

Lychee isn’t far behind, clocking in at 79% DV for a similar serving size.

Each of these exotic fruits are quite unlike any other fruit commonly consumed in Western cultures. Not just because of their shape, size, flesh color, or even their taste. Both longans and lychees are unique in that they have a tough outer skin (or shell) that must be pierced and peeled away to reveal the edible inner flesh.

The following video from the “In The Kitchen With Matt” YouTube channel walks you through each step of the process:

Lychees are prepared and eaten in a similar way:

Now let’s have a look at the seasonality of longan vs lychee.

In the US, most longans are grown in Florida. Longan season in Florida, according to the Miami Fruit website, is in July. They may also be available through August and even September in some instances.

When out of season, longan can be purchased as a snack item in the form of dried fruit.

Lychee season, on the other hand, is from mid-June to mid-July, according to LycheesOnline.com.

Much like longans, lychee too can be purchased as a dried fruit. Additionally, lychee products are often sold as:

Although there are some differences between longan vs lychee, it’s safe to say that these two fruits have more in common than not. They have similar nutritional profiles, a similar appearance once peeled, and they even come from the same family.

Think of each as different variations of the same delicious fruit. Why choose one if you can try both?