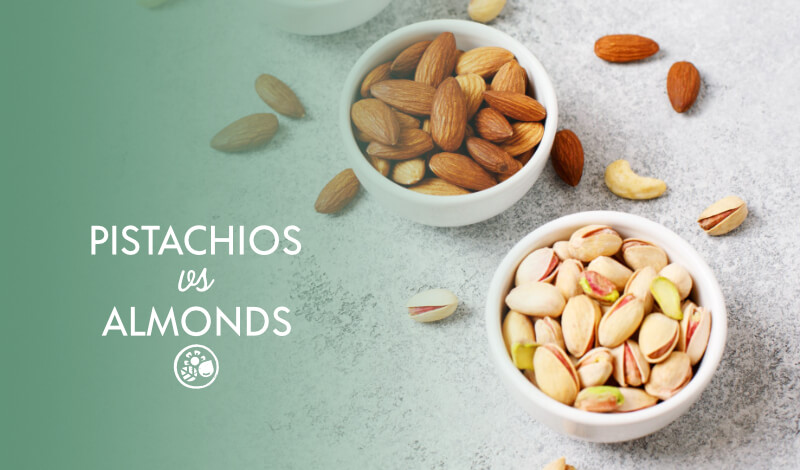 Nuts are commonly touted for their convenience, taste, and numerous health benefits. And rightly so! Nuts are a plant-based snack that packs fiber, protein, and various vitamins and minerals in every serving. Two of the more popular varieties of nut would be pistachios and almonds. If you’ve ever wondered if one nut has a nutritional advantage over the other, however, then today you’re in luck. In this article, we’ll be going over all of the differences between pistachios vs almonds as it relates to nutrition and health benefits.

As it turns out, there are few nutritional differences between pistachios vs almonds. They’re both excellent sources of healthy fats, fiber, vitamins, minerals, and plant-based protein. The biggest difference between the two is that pistachios contain more vitamin B6, whereas almonds come with more vitamin E.

That said, several of the minor differences between the two may be worth considering. Let’s have a closer look.

Pistachios are small green nuts that grow on the Pistachio tree and come in hard outer shells that must be cracked open to retrieve the edible nut inside. 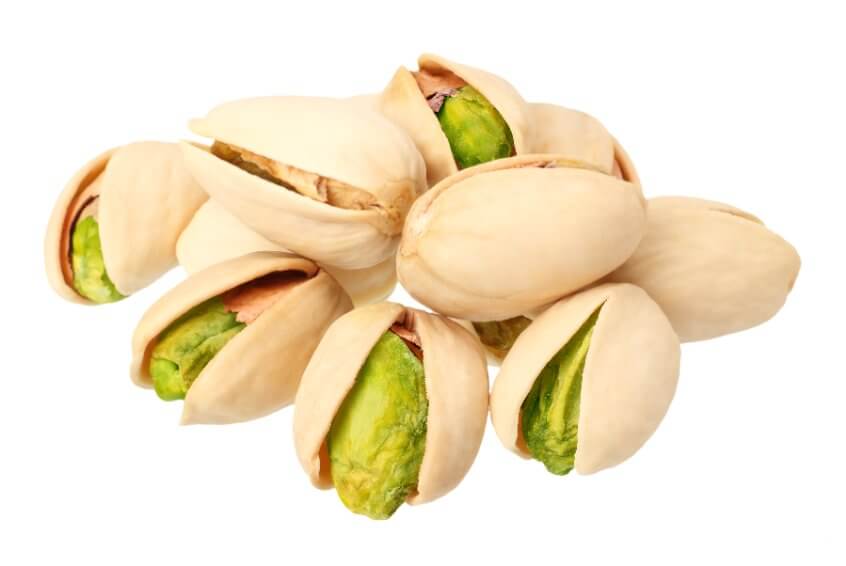 Pistachios are similar to almonds in that they’re offered in raw and roasted varieties. Raw pistachios have a chewier texture and a sometimes bitter aftertaste depending on their ripeness. Roasted pistachios, however, are crunchier and have a richer flavor.

Much like other nuts, pistachios come with numerous health benefits. According to Cleveland Clinic, these include:

Almonds are small nuts that grow on the Almond tree and come encased in a thin outer skin that is sometimes removed after they are harvested and shelled. 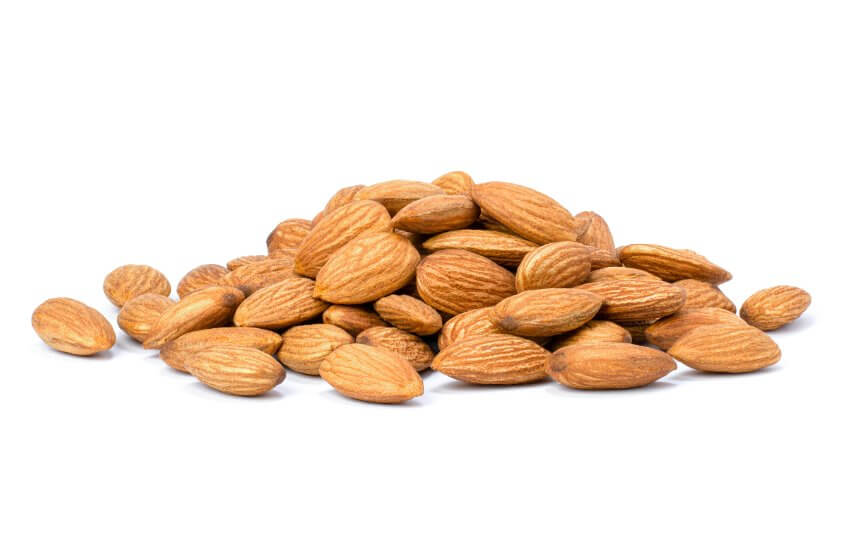 There’s no denying the health benefits that a nut like the almond has to offer. According to WebMD, these include:

The table below compares the nutrition facts for a 1-ounce serving of pistachios with an equal serving size of almonds:

As you can see, there are few nutritional differences between pistachios and almonds. In fact, they each share numerous benefits.

Both pistachios and almonds are nutritionally similar in the following ways:

Pistachios and almonds also share similar quantities of certain vitamins and minerals, including:

Pistachios And Almonds Are Both Low GI Foods

Another area where there’s virtually no difference between pistachios vs almonds is the Glycemic Index (or “GI” for short)– a system for ranking foods on a scale of 1 to 100 based on how much they spike blood sugar when consumed. The higher the number, the greater the blood sugar spike, and a lower number means a lower blood sugar spike.

This means that both pistachios and almonds can serve as a tasty and healthy snack that will not spike blood sugar levels as much as many other sweet and savory snacks.

As mentioned earlier, pistachios and almonds have more commonalities than differences when it comes to nutrition. That said, they do have some noteworthy differences, and they may be worth considering depending on your own dietary needs and health goals.

Pistachios Are An Excellent Source Of Vitamin B6

One of the biggest differences between pistachios vs almonds is that the former is packed with vitamin B6– a nutrient that helps keep the immune and nervous systems healthy. It also plays a role in brain development.

Additionally, there is evidence to suggest that vitamin B6 can help reduce morning sickness during pregnancy and may even reduce the symptoms of premenstrual syndrome, says Mayo Clinic.

Just a single 1-ounce serving of pistachios packs a whopping 24% of the Daily Value of vitamin B6. Almonds, on the other hand, only contain 2% DV for the same amount.

Pistachios may have won the B6 battle, but when it comes to vitamin E, almonds take the lead.

If you are seeking to add more vitamin E to your diet then you cannot go wrong with almonds, as just a single 1-ounce serving packs 37% of the Daily Value. Pistachios, by comparison, only contain 3% DV.

Almonds Contain Roughly Twice As Much Magnesium As Pistachios

Another nutritional difference between pistachios and almonds would be their magnesium content.

Magnesium is a mineral that is involved in over 300 biochemical reactions in the body. It helps to maintain healthy muscle and nerve function and keeps the heart beating steady.

Almonds contain more than twice as much magnesium as pistachios, clocking in at 19% of the Daily Value per 1-ounce serving. Pistachios, on the other hand, come with 8% DV.

Finally, pistachios have the advantage of containing more omega-3 fatty access than almonds.

Although neither pistachios nor almonds are particularly impressive sources of omega-3s (walnuts, or even walnut butter, would be preferable here,) pistachios do win this battle, containing 71.8 mg per 1-ounce serving. Almonds, by contrast, only have 1.7 mg.

Now that we’ve gone over the nutritional similarities and differences between pistachios and almonds, let’s have a look at some of the more practical ways these two nuts compare.

Another area where pistachios and almonds differ is their storage protocol and expected shelf life.

When it comes to shelf life, pistachios can last for roughly 6 months when kept at room temperature and 12 months when refrigerated. It is recommended that they be kept away from humid conditions. They will taste more bitter than usual when they go bad, and may even begin to accumulate mold.

Almonds, on the other hand, can last for up to 2 years. It is recommended that almonds be stored in cool, dry conditions.

When it comes to price, unfortunately, pistachios and almonds are not for the frugal.

A 24-ounce bag of pistachios can go for as much as $15 USD. The reason why they’re so expensive is because of how labor-intensive they are to produce and harvest. Shelled pistachios can cost even more.

Likewise, almonds can retail for anywhere between $10 to $15 USD and are also a labor-intensive nut to bring to market, making them pricier. They also require more cleaning and care than other nuts to ensure they are safe for consumption.

When it comes to pet safety, pistachios are not toxic to dogs, but they are also not recommended due to their fat content and lack of nutritional value for canines.

Likewise, almonds should also not be fed to dogs, according to the American Kennel Club. While they may not be toxic, dogs cannot digest them properly and may result in gastrointestinal distress if eaten.

In conclusion, the differences between pistachios vs almonds are outweighed by their similarities. Whichever you choose, you cannot go wrong. They both have much to offer in terms of plant-based nutrition, they’re both handy, tasty snacks that can be taken on the go, and each will last a while if stored properly. Just make sure to keep them away from your four-legged friends!