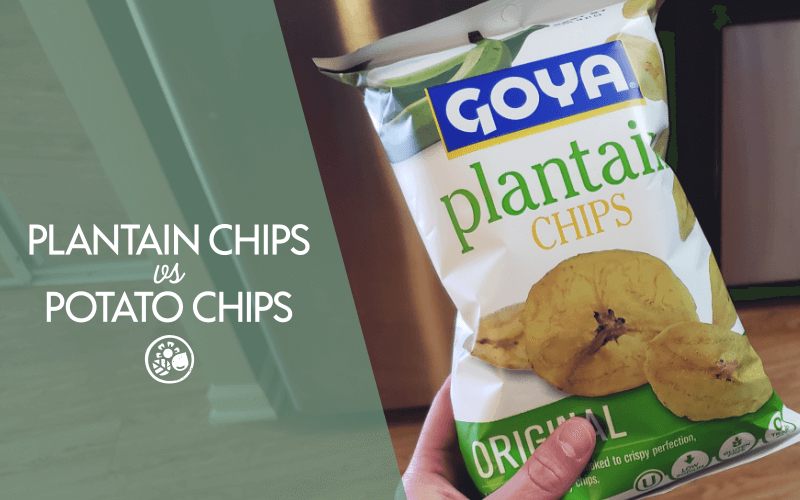 For health-conscious dieters, plantain chips may seem like a healthy snack alternative to classic potato chips, but how do the two stack up when compared side by side? As it turns out, plantain chips VS potato chips is a matchup too close to call. The nutritional disparity between the two is negligible, and in the end, they’re both processed snack foods that should be consumed in moderation and never relied on for nutritional needs.

That said, there are some subtle differences between the two that are worth noting, and they be may be enough to influence your dietary decision making, depending on your own needs.

What Are Plantain Chips?

Plantain chips are a snack food that is made by taking thinly-sliced pieces of a plantain fruit and frying them in oil; usually vegetable oil. Salt and various other seasonings are sometimes use as well.

This is not unlike potato chips, which are made using a similar procedure, only with a potato rather than a plantain. In essence, plantain chips are basically potato chips that were made with a plantain instead of a potato.

How They Can Be Used

Known in other cultures as “Chifle,” plantain chips are primarily consumed either as a snack item or as a side dish in a casual entrée.

Countries where plantain chips are a standard part of the traditional cuisine include Ecuador, Thailand, and northern Perú.

In Western countries (like the United States,) plantain chips are lesser known and more obscure. You can usually find them hiding in the designated ethnic sections of your local grocery store. Even then, they can still be difficult to find.

The difference in taste between plantain chips vs potato chips is minimal.

Plantains as a whole tend to taste like a starchy banana — or a banana combined with a potato — and enough of that carries over into plantain chips to taste the difference.

Much like potato chips, plantain chips come in a variety of flavors:

Brands like Barnana have more creative and exotic flavors, whereas Goya has more of the traditional flavors.

Determining whether or not plantain chips are healthy is a rather ambiguous proposition because it depends entirely on what you’re comparing it to.

Considering that plantain chips are an alternative to potato chips, let’s compare the two to see how they stack up nutritionally.

The table below compares the nutrition facts for both Goya’s brand of original plantain chips and Lay’s Classic Potato Chips:

As you can probably see, there’s very little nutritional difference between plantain chips vs potato chips.

The plantain chips have slightly less calories and slightly less fat, but the potato chips have less saturated fat. Of course, these disparities are so small that they’re essentially irrelevant.

Let’s have a closer look at some of the areas where one stands out more than the other.

Plantain chips do have a couple of legitimate advantages over their potato counterpart, and they may be worth considering based on your own dietary needs.

Fiber is an indigestible form of carbohydrate that is tasked with removing waste from the body. Adequate fiber intake can play a role in reducing risk of coronary artery disease, as well as certain types of cancers.

This may seem like a small difference, but it’s really not. It means that plantain chips have triple the fiber that potato chips do. When scaled up to a 5-serving portion, it’s the difference between 15 grams of fiber and 5 grams. This is where the significance of it becomes more apparent.

Sodium is an essential mineral and electrolyte that is partially responsible for managing electrical pulses in the body. These pulses dictate a variety of bodily functions, like muscle contraction, blood pressure, water balance, and more.

The modern Western diet tends to contain too much sodium and not enough potassium, which can lead to things like bloating, water retention, and it can be a contributing factor to hypertension. Because of this, it stands to reason that a significant percentage of us in Western cultures could benefit from a reduction in sodium intake. However, this is something that should be discussed with your physician before pursuing.

It should be noted though that sodium content is something that varies by brand, so make sure to check the nutrition labels of your products.

Much like the plantain variety of chip, the potato chip also has a couple of areas where it outshines its starchy nemesis nutritionally.

If carbohydrate content is of importance to you then potato chips may be the better option. Per serving, potato chips contain 25% less carbohydrates than plantain chips do. Although, in all fairness, if you’re looking to eat less carbs then you should probably stay away from both plantain and potato chips as they are carb-dominant snacks.

Net carbohydrates is what you get when you subtract grams of fiber from the total grams of carbohydrates. Since fiber isn’t metabolized the same way other carbs are, it doesn’t have the same insulin response. Because of this, it stands to reason that net carbohydrates are a more accurate representation of what you’re consuming.

Although the plantain chips have more fiber, the potato chips have less net carbohydrates, clocking in at 17 grams and 14 grams respectively.

Protein plays many important roles in the body, but its primary responsibility is repairing and rebuilding muscle tissue. This is especially true for weightlifters, resistance training, and other of type of athlete.  The more active you are, the more protein your body will require for recovery.

If adding more protein to your diet is a priority, then potato chips would be the better choice because they contain 2 grams of protein, whereas plantain chips contain none.

It should be noted though that if protein is your focus, then neither of these snack items are sufficient. 2 grams is small enough to be insignificant, so you would be better served seeking plant-based snack items that are higher in protein, like bean chips and roasted chickpeas.

Finally, potato chips would be the better option if you’re looking to maximize your potassium intake.

Much like sodium, potassium is an essential mineral and electrolyte that regulates electrical pulses within the body.

Potassium acts as somewhat of a counterbalance to sodium in that it causes the body to expel water, whereas sodium causes it to retain water. Boosting potassium intake has the capacity to counteract some of the negative consequences of excess sodium consumption.

Although plantains are quite high in potassium, potatoes contain even more. So it makes sense that a salty snack product made from potatoes would have more potassium than one that was made with plantains. Potato chips have roughly 30% more potassium per serving than plantain chips do.

Despite the nutritional differences between plantain chips vs potato chips, they’re largely one in the same. The primary difference between them is the starch used to make them. One isn’t necessarily healthier than the other, but your choice could be impacted by your personal dietary needs.

Those looking to cut sodium and increase fiber intake would be better off going with plantain chips. However, if you’re looking to maximize protein and minimize carbohydrates, potato chips would be the winner.