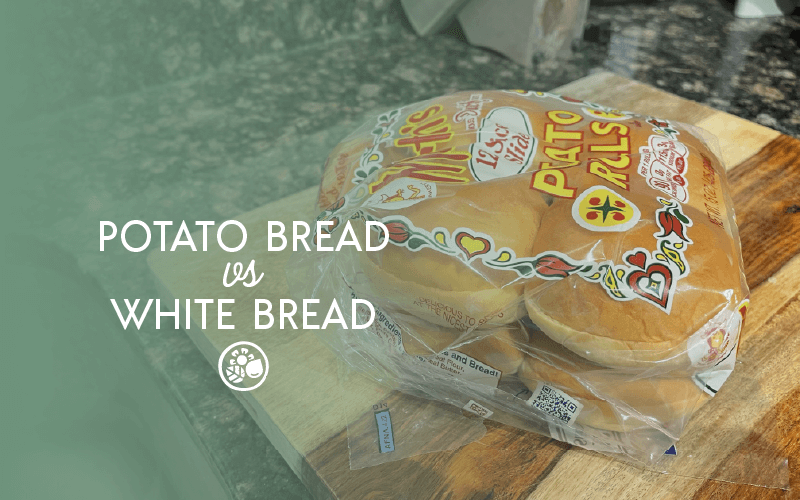 Of all the different types of bread available to consumers, potato bread and white bread are two of the most commonly purchased. This is particularly true in the US, where each bread variety is a popular choice for sandwiches and hamburger buns. If you’ve ever wondered if one has a nutritional advantage over the other though, then today you’re in luck as we will be comparing potato bread vs white in-depth so you can decide for yourself.

In short, the main difference between potato bread vs white bread is that potato bread is made partially with potato flour. As a result, it is more calorically dense and contains more protein, fiber, and minerals than white bread. This also alters the taste, giving it a mildly richer flavor.

Let’s have a closer look at the differences between these two breads.

What Is Potato Bread?

Potato bread is quite similar to white bread. It is made much in the same way. The only difference is that a portion of the wheat-based flour used to make the bread is replaced with potato flour– a fine powder made from peeled and cooked potatoes that have been dehydrated and pulverized. 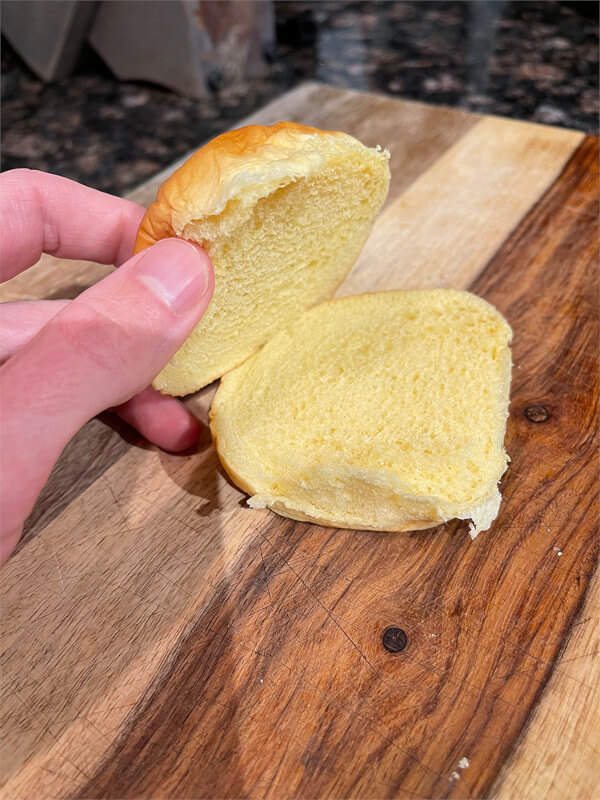 As a result, potato bread has a yellow color, a denser and chewy consistency, and a mildly richer taste.

Potato bread has many uses and can even be made at home. However, it is most commonly used for hotdog and hamburger buns. It can also be used for french toast, sandwiches, or virtually any other way you would use white bread.

White bread is a classic type of bread that is made using wheat flour that has had its bran and germ removed from the grain. 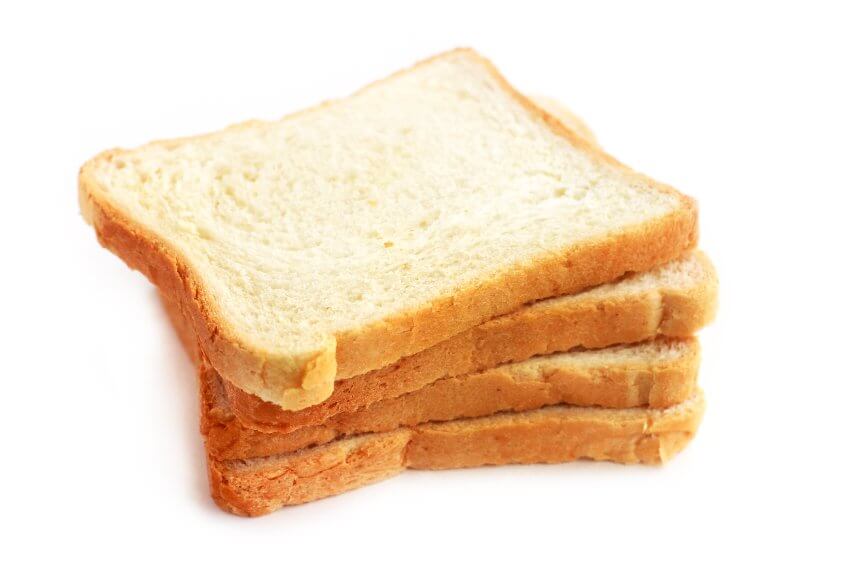 This is done to give the bread a softer texture and a more pleasant taste. The downside, however, is that much of the fiber, vitamins, and minerals are removed during this process. This means that white bread isn’t as nutritionally beneficial as bread made from whole wheat flour.

This begs the question: how does potato bread compare to white bread?

Now that we know what the difference is between the two, let’s have a look at some of the ways they differ nutritionally.

The table below compares the nutrition facts of a slice of Martin’s Potato Bread — the most popular potato bread brand — versus a slice of Wonder white bread:

As you can see, the nutritional differences between potato bread vs white bread are modest. They have much in common, including:

That said, there are some nutritional differences between the two that may be worth noting. This is especially true if you plan to consume the bread in larger quantities.

While neither potato nor white bread is a great source of fiber, it is worth noting that potato bread contains roughly triple the fiber content of white bread.

An indigestible type of carbohydrate, fiber removes waste from the body and can help maintain bowel health, lower cholesterol, and control blood sugar levels, according to Mayo Clinic.

A slice of potato bread will provide you with 1 gram of fiber, whereas a similar serving size of white bread contains 0.3 grams.

The reason why white bread is so low in fiber is that the flour it’s made from has had its bran and germ removed from the grain. This is true for potato bread as well. However, some of the white flour is replaced with potato flour when making potato bread. This adds back in a bit of fiber as potatoes naturally contain it.

Another minor difference between potato bread vs white bread is the protein content.

An essential macronutrient, protein helps the body build and repair muscle tissue, among many other purposes it serves.

Opting for a slice of potato bread will provide you with roughly 33% more protein than white bread, clocking in at 3 grams and 2 grams respectively.

Again, neither bread is an excellent source of protein. However, if you are consuming multiple quantities then this difference may be significant enough to consider.

Not only does potato bread have more protein and fiber than white bread, but it also contains more minerals per serving, including:

While neither bread variety is a spectacular source of these minerals, this difference is worth pointing out if we’re comparing potato bread and white bread.

Potato Bread Is Lower On The Glycemic Index

Another consideration to make when choosing between potato bread and white bread may be how they rank on the glycemic index.

The glycemic index (or “GI” as it’s called) is a way of gauging how much a particular food may spike blood sugar levels. It is based on a numerical ranking where a higher number means a greater blood sugar spike. This is a useful tool for diabetic patients seeking to monitor their blood sugar levels, according to Mayo Clinic.

A comparative study on PubMed estimates that the GI of potato bread ranges from 61 to 67, while white bread scores roughly 70 on the index.

This may seem like a modest difference, but if we’re following the GI chart then that places potato bread at medium on the index, whereas white bread would be classified as high.

One noteworthy difference between these two bread types is their calorie count.

Calories are important because they’re the unit of measurement used to gauge the energy we consume and expend. Consuming less energy than your body uses is how weight loss is achieved, according to Mayo Clinic.

If calories are at a premium for you then you’ll be better served opting for white bread over potato bread, as it contains roughly 28% fewer calories per slice, clocking in at 65 and 90 calories respectively.

This is likely due to the density of potato bread.

White Bread Contains Half The Sugar Of Potato Bread

Finally, if sugar content is of concern for you then white bread would be preferable as it contains 1.5 grams of sugar per slice, whereas potato bread packs double the sugar at 3 grams per slice.

With only a few modest nutritional disparities between them, the dilemma of choosing between potato bread vs white bread might just come down to personal preference.

If a denser and chewier (and also yellow) bread sounds more appealing, then potato bread may be for you. For everyone else, you can’t go wrong with the neutral taste of white bread.