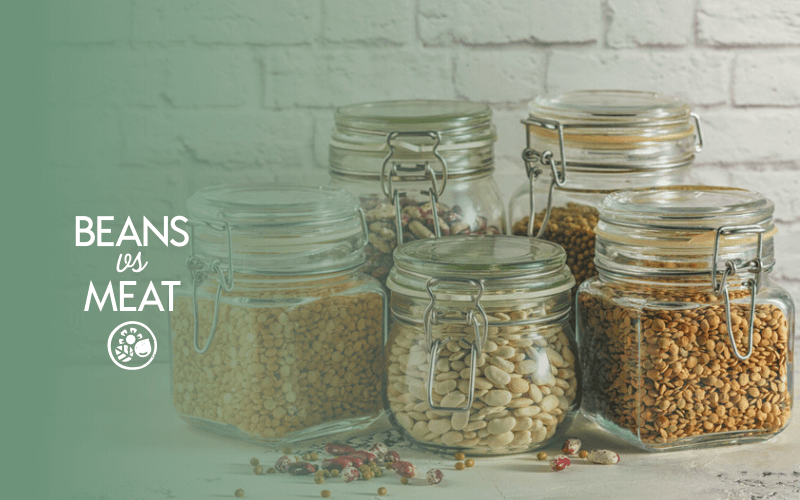 For those seeking to reduce their intake of animal-based food products, beans may seem like a suitable source of plant-based protein. Considering that the protein in beans vs meat can vary by source, that may only be true under certain conditions.

It’s a common misconception that switching to a vegetarian diet or vegan lifestyle is a harrowing undertaking. This is perhaps due to the fact that the U.S. is the largest consumer of beef in the world by far. As of 2020, it accounted for 21% of total beef consumption, putting away over 27 billion (yes, billion!) pounds of the stuff. That’s about 82 pounds of meat for every man, woman, and child in the course of a year.

These days, however, it’s incredibly easy to fill the niche of beef, chicken, pork, and even a range of animal products, thanks to plant-based substitutes that replicate the experience of eating meat, right down to the taste and texture.

Of course, you may also find that you like the original flavor of plants and you don’t actually miss meat that much when you switch over.

Still, you’re probably concerned about getting enough protein. Doesn’t meat have a lot more than other foods?

In truth, meat and animal products have a different type of protein than plants, but that doesn’t mean you can’t get what you need from plant sources that are high in protein, like beans, when you pair them properly.

Here’s what you need to know about the protein in beans vs meat in order to make healthy choices.

It’s important to understand what people mean when they say meat is a “good” source of protein.

It has to do with the fact that meat and animal products (like eggs and dairy) contain complete proteins that are similar to the ones found in the human body.

This includes a full complement of amino acids that the human body needs to build proteins and function as it should.

The Downsides Of Getting Protein From Meat

Although meat tends to contain proteins with a complete amino acid profile, there are some downsides to relying on meat exclusively for your protein needs.

Unfortunately, diets that are high in meat — particularly red meat — have been linked to diseases and conditions like obesity, diabetes, heart disease, cancer, and more.

Then, there’s the ethical and environmental toll of meat production to consider.

Completely aside from the ethical aspects of raising animals for consumption (often in inhumane conditions), the meat industry is considered to be a cause of disruption to climate conditions.

Between feed sourcing, manure processing, and the demand of meat processing, packing, and shipping, there’s substantial environmental impact to contend with, including deforestation, pollution , and greenhouse gas emissions.

As a consumer, it’s often hard to know everything about the products you’re purchasing, but when it comes to meat, the picture is relatively clear.

If protein is the main draw for supporting meat production, you’ll be glad to hear you can find it elsewhere.

While beans are technically legumes and not vegetables, they’re still plant-based foods that provide the body with a host of beneficial vitamins, minerals, fiber, and phytonutrients.

They also have a lot of protein.

Benefits Of Getting Protein From Beans

Consumers often add beans to their diet because of their high fiber content, which aids in healthy digestion and helps to lower cholesterol, control blood sugar, and maintain a healthy weight.

Diets that are high in fiber have also been linked to reduced risks for heart disease, cancer, and other common health concerns.

When it comes to the protein in beans vs meat, there are also benefits to consider; namely that a single serving of beans has nearly the same amount of protein as beef.

The Amount and Type of Protein in Beans VS Meat

While there are a range of different meats and beans to consider, we’ll compare just a couple here to give you an idea of their nutritional similarities and differences. Let’s start with the nutritional make-up of meat.

A single serving of beef (about 4 ounces) contains:

Beef also has 12% DV (daily value) of iron, plus small percentages of phosphorus, zinc, and vitamins B3, B6, and B12.

As noted above, it also offers up all of the essential amino acids your body needs but doesn’t produce on its own.

That’s a pretty sizable portion of protein with less fat and calories than a slightly larger serving of red meat.

So how do beans stack up? A 1-cup serving of pinto beans delivers the following nutrients:

While beans have slightly less protein than beef, they contain a lot more fiber and significantly less fat than both beef and chicken, making for a healthy, filling, low glycemic index alternative to meat.

They do have to be paired with other plant-based foods to deliver all of the amino acids found in meat, though.

The Benefits of Protein in Beans VS Meat

As omnivores, humans have a lot of options for variety in their diet, and this is important, since people require a wide range of nutrients to survive and thrive.

One thing is true, however – you can meet all of your nutritional needs with a plant-based diet.

The same cannot be said for meat alone. That should tell you something about the nutritional disparities between meat and plants!

While a person can survive for a long while on meat alone, eventually, nutritional deficiencies will lead to health concerns. A well-planned plant-based diet, on the other hand, has considerable, proven health benefits.

Making Up For Lost Amino Acids

As for the protein in beans vs meat, you can gain the exact same benefits by simply pairing beans with complementary foods that contain the amino acids that beans lack. After all, there’s a reason why rice and beans make for such a popular combination!

There are nine essential amino acids, including:

These organic compounds combine in the human body to make the proteins you rely on for growth, tissue repair, digestion and absorption of food, and a range of other functions.

Beans tend to be particularly high in lysine, while rice serves as an excellent source of methionine. Together, however, they provide all nine essential amino acids, delivering the same complete protein found in meat.

Most people have had experience eating beans in place of meat. If you’ve ever tried a vegetarian burrito, for example, you understand just how little meat actually adds to the flavor equation.

Honestly, you can use beans to bulk up any meal; from your morning eggs to soups, stews, salads, spreads, and more. You can even make vegan brownies with black beans!

Then there are meat substitutes made from beans, such as the Impossible Burger, made from soybeans; Beyond Burger, containing pea proteins, mung beans, and brown rice; and Gardein Chipotle Black Bean Burger, made primarily with black beans and brown rice, just for example.

If you’re worried about how to sub in beans, you’ll find there are endless options to explore.

When considering protein in beans vs meat, beans may have the advantage depending on your nutritional needs.

Not only does a single serving have adequate protein, but it can easily be paired with other plant-based options (like rice) to deliver the same complete proteins found in meat and animal products.

Even the flavor debate has been largely addressed by products that mimic the taste and consistency of ground beef.

All told, there are plenty of reasons to cut meat out of your diet and switch to beans or other plant-based alternatives for consuming that much-needed protein!