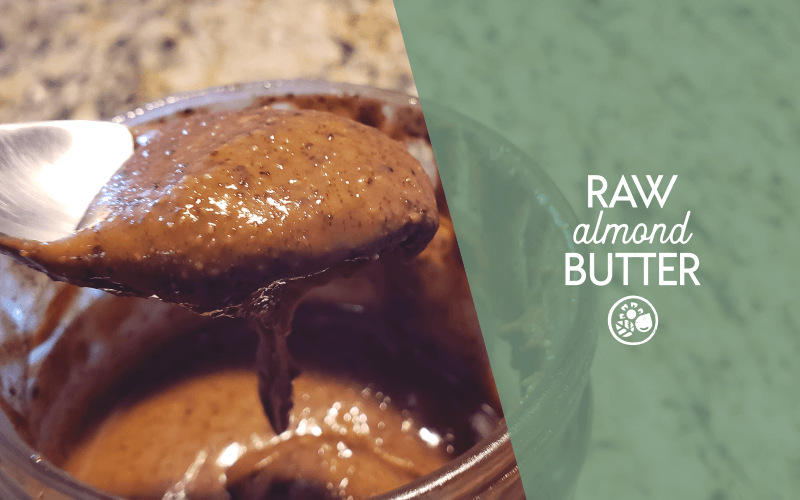 Almond butter is a nutty spread made by processing almonds that are ground into a buttery paste-like consistency. 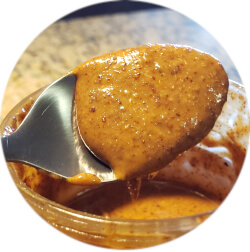 Much like peanut butter, almond butter comes in several varieties, including smooth and crunchy. There’s also the “natural” variety, which requires stirring in order to combine the oil with the ground almond paste to get that buttery consistency. Then there’s the emulsified variety, which doesn’t require any stirring. The natural variety should be refrigerated after opening in order to prevent oil separation.

How Almond Butter Is Used

Almond butter can be used the same way peanut butter is used, including…

Almond butter is just one of many varieties of nut and seed butters that can be incorporated into a plant-based diet. Be sure to check out the ultimate vegan grocery list for more nut butter options.

The primary benefit of consuming almond butter as opposed to peanut butter is that it typically has more fiber than peanut butter does. It’s also a good alternative for anyone who may have peanut allergies, or simply doesn’t like the taste of peanut butter. Almond butter, by comparison, has a milder flavor and aroma. 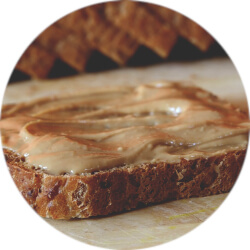 Almonds are different from other types of nuts and seeds. By law, almonds must be pasteurized before consumption. Pasteurization is the process of exposing a food to heat in order to kill any harmful pathogens.

Because of this, almonds can vary in how they’re prepared for consumption. The two main varieties of almonds are raw and roasted — both of which can be used to make almond butter.

In order to determine if raw almond butter is better than roasted almond butter, it makes sense to examine each variety and weigh out the pros and cons. 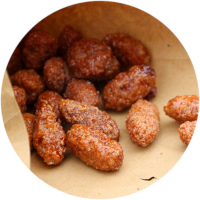 Almonds are roasted for a variety of reasons. Roasting almonds brings out their flavor, enhances their aroma, and gives them a crunchier consistency. Roasted almonds tend not to be as chewy and earthy as raw almonds are.

Nutritionally-speaking, there’s very little difference between roasted and raw almonds. Almonds that are dry roasted tend to be slightly lower in calories by weight, but the reason for that is believed to be because of the moisture lost during the roasting process.

Almonds roasted in oil tend to be slightly higher in fat and calories, mainly due to the oil they’re roasted in.

Although roasting almonds does little to alter their nutritional profile, that doesn’t mean they’re without potential downsides. There are some considerations to make when choosing between raw and roasted almonds.

For one, roasted almonds have been found to contain Acrylamide — a chemical compound that has shown to increase cancer risks in rodents when they were exposed to it. Although large numbers of studies have failed to demonstrate a link between dietary Acrylamide consumption and cancer risk in humans, you can decide for yourself if you want to avoid consuming such a compound.

Another potential downside of roasted almonds is that the roasting process might damage the healthy fats they contain. When polyunsaturated fats are exposed to heat, they’re more likely to break down and create free radicals. According to Huntington’s Outreach Project for Education, at Stanford:

Free radicals are atoms or molecules that are highly reactive with other cellular structures because they contain unpaired electrons.

Finally, it is believed that oxidation can occur when roasted almonds are stored. This is also due to the breakdown of the polyunsaturated fats during the roasting process.

Now let’s have a closer look at raw almonds to weight the pros and cons of each. 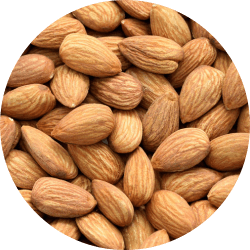 Contrary to what you may believe, raw almonds aren’t actually raw. By law, almonds must be pasteurized before consumption. This is done to prevent harmful pathogens in the soil they were grown in from making their way into the food — namely salmonella, which there have been outbreaks of in the past.

Chemically pasteurizing almonds entails exposing them to a chemical known as Propylene Oxide. Once harvested, the almonds are gassed with the chemical, which kills any harmful food-borne illnesses they may be harboring.

In steam pasteurization, the almonds are placed in large metal containers where they are exposed to steam at temperatures that rise to 165 degrees Fahrenheit. This is believed to kill any unwanted pathogens.

The primary benefit of consuming raw almonds is that they retain certain heat-sensitive nutrients that may have been killed off during the roasting process, like vitamin B1 (Thiamine). There’s also less risk of oxidation of the polyunsaturated fats associated with the roasted almonds, making raw almonds better for storing.

The potential downsides of consuming raw almonds depends on the method in which they were pasteurized.

It should be noted that just because an almond product is labeled as organic and/or raw, that doesn’t mean it didn’t undergo chemical pasteurization. It’s understandable that this sort of labeling can be confusing.

Finally, it should also be noted that the Almond Board of California has laid out guidelines for pasteurization with Propylene Oxide.

Taking everything we’ve gone over so far into consideration, a reasonable conclusion would be that raw almond butter is better than roasted almond butter so long as the raw almonds were pasteurized with steam and not gas. In this instance, you’ll get to retain the heat-sensitive nutrients that are lost in the roasting process, and you’ll avoid the fat oxidation that results from the roasting process. However, you’ll also avoid the potential negative consequences of consuming raw almonds that were pasteurized chemically.

Hopefully you found this article helpful. Thanks for reading!