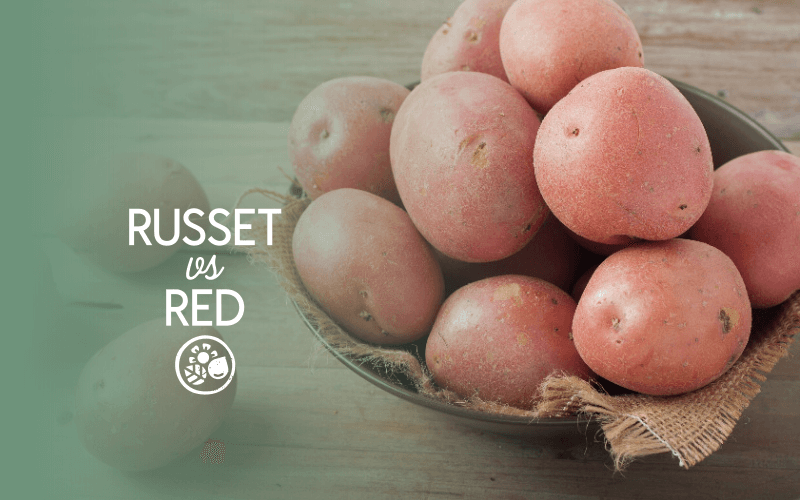 By now the benefits of potatoes are hardly a secret. Not only are they delicious, cheap, and convenient, but they’re also loaded with potassium, vitamin C, and countless other nutrients. If you’ve ever wondered if their benefits vary based on the type of potato though then today you’re in luck. In this article we will be comparing red potatoes vs russet potatoes and going over all of their differences.

That said, there are some minor differences between the two that may be worth considering. Let’s have a closer look.

Let’s first have a look at how these two tubers stack up nutritionally.

The table below compares the nutrition facts of a large russet potato with a red potato of equal size:

As you can see, the nutritional differences between red and russet potatoes are nearly non-existent. They’re both excellent sources of certain vitamins and minerals, such as:

Both red potatoes and russet potatoes are one of the most potassium-rich foods in existence. Just a single large potato can provide you with nearly half the Daily Value for potassium!

When you think of foods that are rich in vitamin C, citrus-based fruits (such as oranges and pineapples) probably come to mind. However, just a single large potato — whether it be red or russet — can provide you with more than half the Daily Value for vitamin C!

And this doesn’t even begin to scratch the surface. The health benefits of potatoes are vast and wide regardless of their variety. So if you’re seeking a plant-based food that packs a nutritional punch then there is no need to fret in choosing between red potatoes vs russet potatoes as they are both packed with nutritional goodness.

Now that we’ve established that there is hardly a nutritional difference between these two tubers, let’s have a look at some of the practical ways in which they differ.

The greatest advantage that russet potatoes have over their red counterpart is that they can be used in so many more ways.

Thanks to their large size and starchy content, russet potatoes work better for:

Red potatoes, on the other hand, aren’t as starchy as the russet variety, therefore they don’t work as well for making French fries and the like.

Instead, red potatoes are best when diced and roasted in oil and seasoning– usually rosemary.

2. Russet Potatoes Tend To Be Larger

The biggest visual difference between red potatoes vs russet, aside from their color, is their size.

The average red potato is only slightly smaller than a baseball and weighs roughly 80 grams. Russet potatoes, on the other hand, can be nearly as big as a softball and often weigh as much as 300 grams.

This gives russet potatoes an advantage if you’re paying by the unit rather than by weight as it provides more bang for your buck. Not only that, but a larger potato means more starchy goodness to cook with.

Probably the biggest advantage that red potatoes have over their russet counterpart is that their skin is thinner and easier to eat.

Although the skin of a russet potato is every bit as edible as a red potato, it tends to be tough and leathery, which can be unpleasant when eating. Not only that, but it doesn’t work well with the soft, starchiness of the russet potato’s insides.

Tying in with our previous point about red potatoes having a more edible skin, this means that they often require less prep time as well.

Russet potatoes often need to be peeled before using them to make things like mashed potatoes. This can be quite time-consuming.

Red potatoes, on the other hand, need not be peeled at all. They can simply be washed, diced, and baked as-is. They can even be used to make skin-on mashed red potatoes.

Although both red and russet potatoes are fairly cheap, the russet variety has an advantage here as they tend to be slightly cheaper.

A quick look at Amazon’s Whole Foods website lists russet potatoes at $1.49 per pound, whereas red potatoes are listed at $1.99 per pound.

While this isn’t an enormous price difference, it may be worth considering for those looking to get the greatest nutritional bang for each buck.

That said, prices can vary by region, so be sure to check your local market for a more accurate reference.

The final difference we’ll be examing between red potatoes and russet potatoes is their expected shelf life, which is yet another area where the latter has a slight advantage.

Russet potatoes tend to last longest when stored in a cool, dark place (just not the refrigerator!) When properly stored at around 40 to 45 degrees Fahrenheit, russet potatoes can last for up to four months.

While red potatoes do have a long shelf life compared to most other fresh foods, they don’t tend to last as long as russet potatoes due to their thinner skin.

How About Pet Safety?

Finally, you may be wondering if there’s a difference between red and russet potatoes as it relates to their safety around our four-legged friends– or if they’re even safe at all.

While potatoes are not poisonous to dogs, the FDA has released a report suggesting that commercial dog foods that use potatoes as an ingredient may lead to Canine Dilated Cardiomyopathy– a disease that can lead to reduced heart function.

Additionally, dogs should never eat raw potatoes says, the American Kennel Club. This is due to their solanine content– a compound that can be toxic to some dogs.

In conclusion, the difference between red potatoes vs russet potatoes simply boils down to how you plan to use them and what level of convenience you’re seeking.

As far as nutrition and health benefits go, you can’t go wrong with either variety.