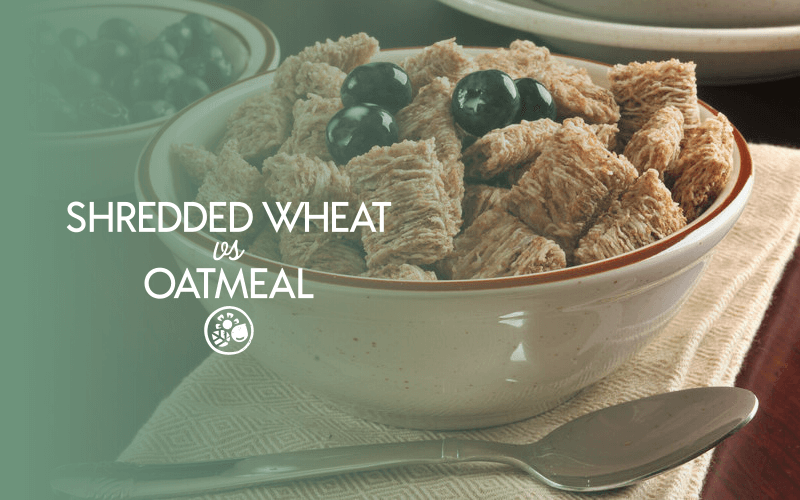 For plant-based eaters looking to make better decisions both in their everyday lives as well as at the breakfast table, the choices are vast and wide. Two of the best breakfast options that exist may be shredded wheat cereal and oatmeal, but is one better than the other? Today we’ll be comparing the differences between shredded wheat vs oatmeal so you can make the most educated decision for your lifestyle.

Although shredded wheat and oatmeal are both nutritious, plant-based breakfast options that are minimally processed, there are a lot of differences between them, and those differences may have an impact on which breakfast items is best for you.

What Is Shredded Wheat?

Shredded wheat is a cereal product that consists of whole grains of wheat that have been folded into little square pillows and toasted under heat.

Shredded wheat cereal is produced by a variety of food manufacturers and can be typically found in the cereal aisle of your local grocery store.

Commonly eaten in a bowl with milk and a spoon, shredded wheat can also be used as a topping for yogurt parfaits, a topping for casseroles, dipped in peanut butter, or simply eaten by hand as a snack.

If you can endure the flavorless crunch, the health benefits of eating shredded wheat are abundant, including:

Oatmeal is a cereal product that is made from oats that have been dried and had their husk removed.

A classic breakfast item, oatmeal also serves as a baking ingredient for various dessert recipes, works as a filler for yogurt parfaits and overnight oats, and can be ground into a flour that can serve as a gluten-free baking alternative.

It should be noted that there are various types of oatmeal that are available for purchase, and before we can nail down a comparison between shredded wheat vs oatmeal, we must first clarify which type of oatmeal product we’re referring to.

Generally speaking, there are three different types of oatmeal products. Let’s briefly go over each.

Rolled oats — also known as old fashioned oats — are the most commonly consumed type of oatmeal. They consist of oat grains that have been dehydrated and flattened, or “rolled” as the name suggests.

The benefit of choosing rolled oats is that they’re less processed than other varieties. However, they make take longer to prepare by comparison.

Much like rolled oats, instant oats (which can also go by “quick oats” or “1-minute oats”) are individual oat grains that have been flattened and dehydrated. However, they’ve also been pre-cooked, meaning they’ll cook quicker on the consumer end (hence the name “instant” oats.)

The advantage instant oats have over the other varieties is that they’re more convenient and require less preparation time.

The downside, however, is that they’re more processed. They also lose their texture quite easily, and can often come with unwanted ingredients added, such as sugar and salt, which can impact the decision you make between shredded wheat vs oatmeal.

Unlike the rolled variety, which requires the oat grain to be de-husked and flattened, steel cut oats are made by simply chopping up the entire oat groat into tiny little pieces.

The benefit steel cut oats has over other varieties is that it’s less processed, it holds its texture and consistency for the longest amount of time after cooking, and it is considered to be the healthier variety due to its glycemic index.

The downside of going with steel cut oats is that they take much longer to cook than the rolled or instant varieties.

Both shredded wheat and oatmeal are heart-healthy breakfast products that come with countless health benefits, but let’s examine them a little closer to see if one is better than the other, starting with the nutritional contents.

The table below compares the nutrition facts of shredded wheat vs oatmeal:

As you could surmise, making a choice between shredded wheat cereal and oatmeal may boil down to the type of oatmeal you prefer to consume.

Let’s touch on some of the pros and cons of each.

Let’s go over some of the advantages you’ll enjoy if you decide to go with shredded wheat vs oatmeal.

One of the biggest benefits that shredded wheat has over oatmeal is that it’s lower in calories per 1-cup serving.

According to a study published on PubMed, fat loss depends entirely on an energy deficit. Or in other words, consuming less calories than your body uses in a day.

This means that if you are looking to lose weight, opting for shredded wheat may help you consume less calories. Not only that, but you’ll be able to eat more food for less calories when compared to the oatmeal varieties.

The American Heart Association recommends keeping your intake of saturated fat to no more than 6% of your total caloric intake; or 13 grams for someone eating a 2,000 calorie per day diet.

When opting for shredded wheat cereal over oatmeal, you’ll enjoy the benefit of consuming less saturated fat and less total fat, which can help you stay within the American Heart Association’s recommended limits.

Another advantage you’ll enjoy when filling your bowl with shredded wheat cereal, as opposed to oatmeal, is that you’ll be consuming less total carbohydrates per serving.

This means that if you’re trying to watch your carb calories, shredded wheat would be preferable over oatmeal.

Calcium is a mineral that is required by the body to build strong bones and maintain bone health. As an electrolyte, it also plays a role in regulating the electrical pulses in the body.

If adding calcium to your diet is a priority for you, then opting for shredded wheat over oatmeal would be preferable because shredded wheat contains significantly more calcium than oatmeal does. In fact, oatmeal has virtually no calcium per serving.

Now that we’ve gone over the advantages of choosing shredded wheat for your morning meal, let’s examine some of the benefits of opting for oatmeal instead.

Fiber consumption comes with a plethora of health benefits, including:

The FDA recommends getting at least 25 gram of fiber for every 2,000 calories you eat.

One of the benefits of choosing oatmeal over other cereal products is that it has significantly more fiber per serving — especially the steel cut variety.

If adding protein to your diet is a priority for you — as it is for many embarking on a plant-based diet — then oatmeal would be the better breakfast cereal to choose over shredded wheat.

Both rolled oats and instant oats have nearly double the protein content (per serving) that shredded wheat cereal has, and the steel cut variety of oats has more than triple the protein!

Much like calcium, potassium is an essential electrolyte that is responsible for regulating hydration, muscle function and the central nervous system.

According to a study published on PubMed, potassium supplementation helped to lower the blood pressure in hypertensive patients who were consuming normal amounts of sodium.

Iron is an essential mineral that is mostly responsible for delivering oxygen throughout the body. A lack of iron in the diet can lead to anemia. It can also cause shortness of breath, a fast heartbeat, cold hands and feet, and brittle nails. [source]

It is recommended that women between the ages of 19 to 50 consume 18 mg of iron per day, whereas adult men require only 8 mg.

The comparison between shredded wheat vs oatmeal is a close call. Regardless of whichever starchy grain you choose to start your day with, they both share plenty of benefits:

The cereal you should choose boils down to the differences in nutrients and which are a bigger priority for you.