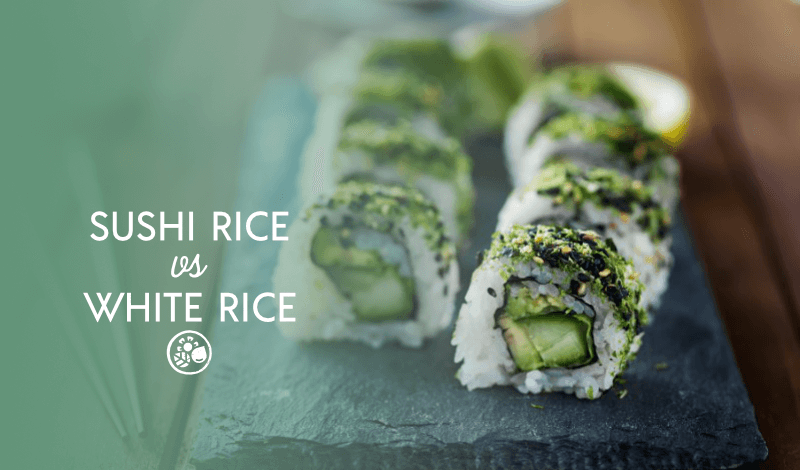 As we’ve gone over in previous articles, there’s no shortage of rice varieties available on the market. In fact, there are over 100,000 types of rice in existence. Two of such varieties would be sushi rice and white rice. You may be surprised to hear that sushi is made with a special kind of rice, but it is certainly for a good reason. Today we’ll be comparing the differences between sushi rice vs white rice, and why it is they’re so different.

In short, the difference between sushi rice vs white rice is that sushi rice is stickier due to its amylopectin content– a type of starch that makes rice gelatinous when cooked. Furthermore, sushi rice is higher on the Glycemic Index despite being nearly identical in terms of calories and macronutrients.

Let’s have a closer look at what separates these two types of rice.

Often marketed as “Japanese” rice, sushi rice is a type of short-grain rice that is used to make sushi, rice balls, and any other cuisine that calls for the rice to be sticky. 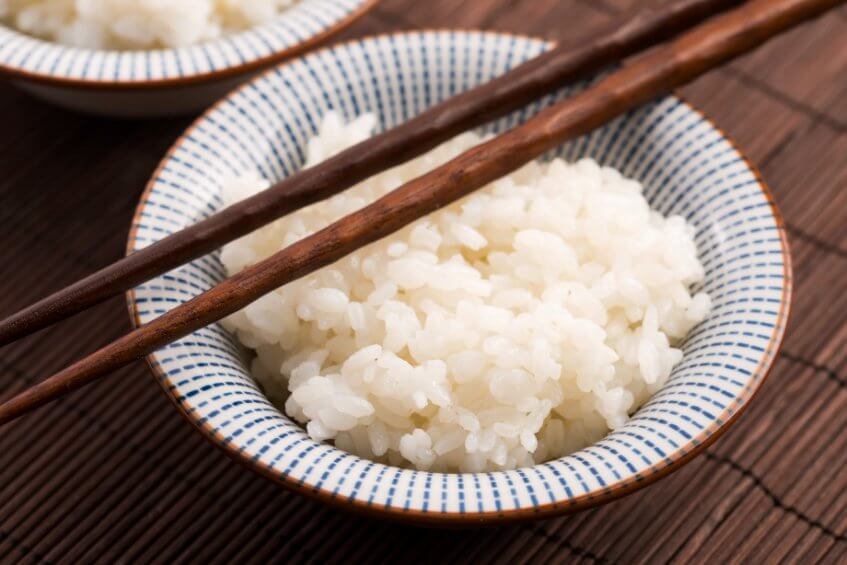 The reason why sushi rice is so sticky is because of a certain type of starch it contains.

According to the Rouxbe website, There are two types of starches in rice:

Another thing that makes sushi rice different from white rice is the way it is cooked. Lundberg, for example — one of the most popular sushi rice brands — recommends letting the rice soak in water for 30 minutes before cooking.

Presumably, this is done to give the rice’s starch more time to break down and become gelatinous, making it more sticky.

White rice, on the other hand, is a type of long-grain rice. And since it is a long-grain rice, that means it tends to have more amylose and less amylopectin than shorter-grain rice varieties, such as sushi rice. 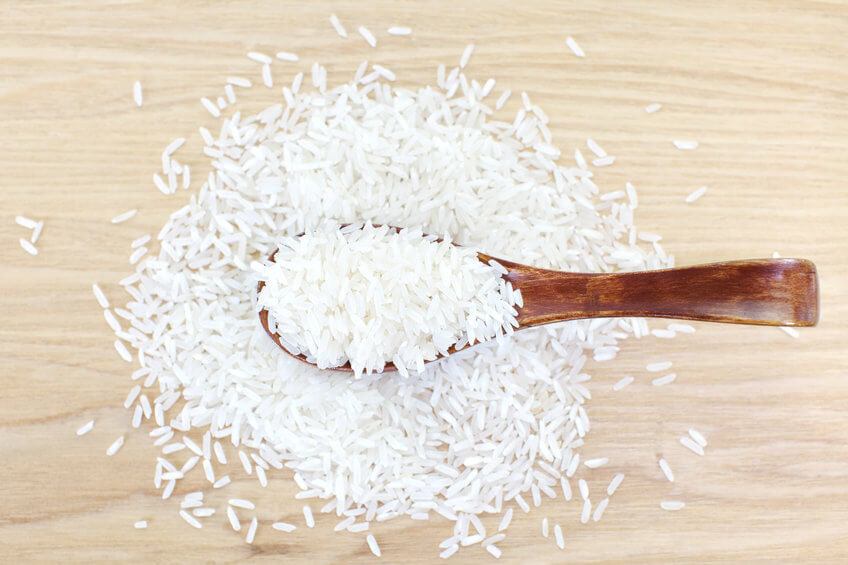 This means that white rice is less likely to stick together when cooked. The grains of white rice are typically separate from one another, which would not be ideal for making sushi.

It should be noted, however, that “white rice” is often an all-encompassing term used to describe various types of rice varieties that may be white in color, including:

For the sake of this comparison, we’ll be pitting sushi rice against the standard long-grain white rice– the most common type of rice used in Western cuisine.

Both sushi rice and white rice have had their husk, bran, and germ removed. This is done to give the rice a softer texture and extend its shelf life once cooked.

Now that we know the main differences between these two rice varieties, let’s have a closer look at some of the other ways in which they differ.

As mentioned earlier, the biggest difference between sushi rice vs white rice is their texture. Sushi rice tends to be stickier, making it ideal for making sushi and rice balls; whereas white rice grains are more easily separated when cooked.

As far as flavor goes, both rice varieties are similarly mild. However, the breakdown in the starch of sushi rice can change its taste and texture ever-so-slightly.

One slight difference between sushi and white rice would be the way they’re cooked.

According to Lundberg’s website, their brand of sushi rice can be cooked by:

Furthermore, it is typically recommended that vinegar, sugar, and salt be added to the rice (after it’s cooked) if the rice is being cooked specifically for sushi.

The following YouTube video from the “Sauce Stache” channel demonstrates a step-by-step process for making the perfect sushi rice:

Now let’s have a look at the nutritional differences between sushi and white rice.

The table below compares the nutrition facts labels of the Lundberg brand of sushi rice — the most-reviewed sushi rice product on Amazon.com — with their brand of long-grain white rice:

As you can see, the nutritional differences between sushi rice vs white rice are nearly non-existent. They both:

That said, there are a couple of nutritional differences worth mentioning.

Sushi Rice Is Higher On The Higher Glycemic Index

An often overlooked difference between sushi rice and white rice is their glycemic index, or “GI” as it’s called.

The glycemic index, according to Mayo Clinic, is a scale that ranges from 0 to 100 and is used to measure how quickly a food will raise your blood sugar levels.

The lower the number on the glycemic index, the slower the food will be digested and absorbed into your bloodstream. This is important for those with diabetes or anyone looking to regulate their blood sugar levels.

Foods with a high glycemic index can cause spikes in blood sugar levels.

According to the Your Diabetes Hub website, sushi rice has a glycemic index of 89, which classifies it as “high“.

Long-grain white rice, on the other hand, has a glycemic index of 50, classifying it as “low“.

This means that for those looking to monitor and control their blood sugar levels, white rice may be preferable to sushi rice.

When comparing the nutrition facts labels of white rice and sushi rice, the two are nearly identical. They each contain the same amount of calories, protein, carbs, and fat.

That said, they do differ ever-so-slightly in terms of mineral contents.

For example, white rice contains more than double the calcium content of sushi rice, clocking in at 4mg and 9mg respectively. However, this difference is negligible as neither rice variety contains a significant amount of calcium. In fact, neither rice contains even 1% of the daily value for calcium.

Additionally, long-grain white rice contains roughly 30% more potassium per serving than sushi rice does. However, much like the calcium content, this difference is negligible seeing as how neither rice varieties contain even 1% of the daily value for potassium.

In conclusion, the main differences between sushi rice vs white rice boils down (pun intended) to how they’re used.

Glycemic index aside, both rice varieties are nearly identical as far as nutrition goes. The only pertinent question to be asked when choosing between the two is how you’ll be eating them.