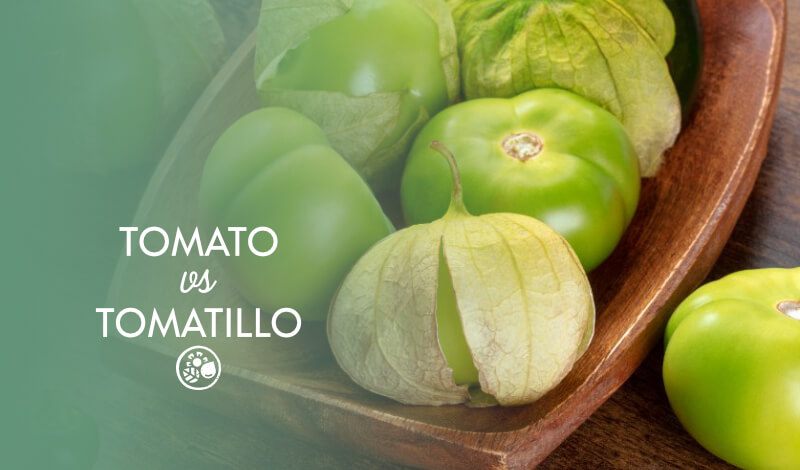 Based on its appearance, the tomatillo could easily be mistaken for an unripe tomato. That is because tomatillos, much like tomatoes, are small, green, and bulb-shaped with a smooth shiny surface. As you’ll see, however, that’s about all they have in common. In this article we’ll be going over all of the differences between tomatoes vs tomatillos.

In short, the difference between tomatoes vs tomatillos is that the tomatillo is a denser, more fibrous fruit that is used to make salsa verde and has an acidic flavor. Tomatoes, on the other hand, have a sweeter, more balanced flavor; making them ideal for salads, sandwiches, and burgers.

That said, there are many more differences between these two types of fruit. Let’s have a closer look.

The tomatillo is a type of fruit that is native to Central America– particularly Mexico. They grow best in well-drained soil, warm temperatures, and direct sunlight. 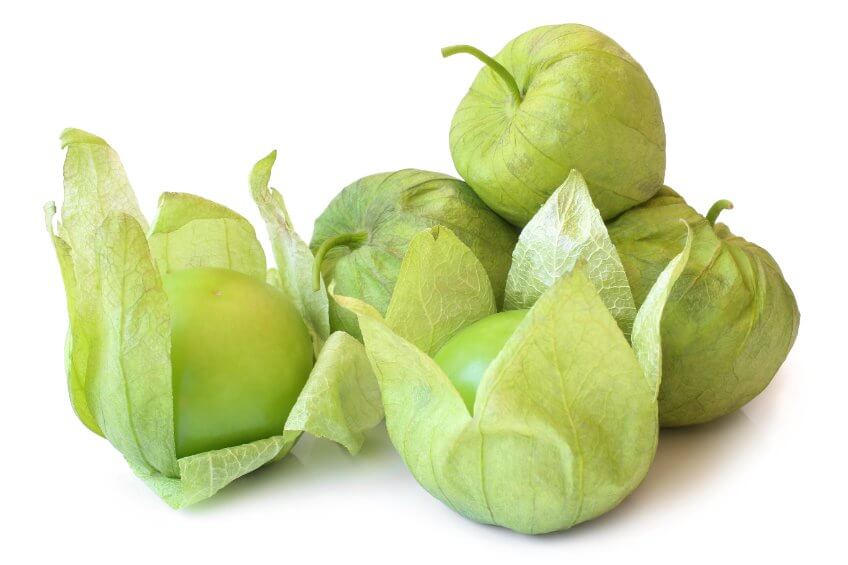 Often confused for unripe tomatoes, the tomatillo is green in appearance with a smooth, waxy skin, and has more in common with gooseberries.

One difference between tomatillos and tomatoes, however, is that tomatillos grow within a papery husk that houses the fruit until it is ripe. Once fully ripened, the tomatillo will emerge from its husk, indicating it is ready for consumption. If eaten prematurely, it can have a bitter taste.

A common misconception about tomatillos is they’re toxic if eaten raw. However, this is not true, according to Live Strong. Tomatillos can indeed be eaten raw, although they may taste sour.

Possibly the biggest difference between tomatoes vs tomatillos is how they’re used.

The most common way for tomatillos to be used is when making salsa verde— a green, spicy sauce used in Mexican dishes such as enchiladas. 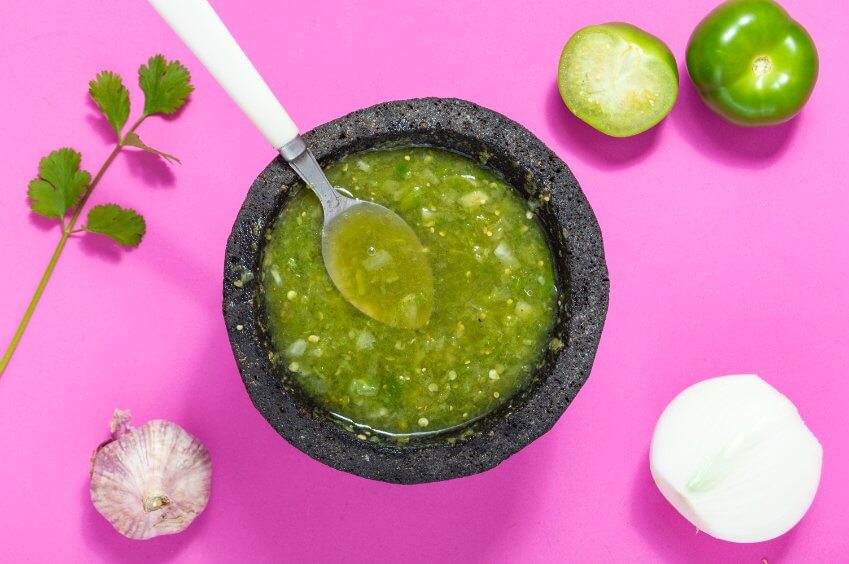 Additionally, they can also be added to salads, eaten as a side dish, and even added to soups. Or they can simply be enjoyed on their own, whether it be cooked or raw (although cooking them is preferred.)

Although they may look similar to tomatoes on the outside, tomatillos take on a much different appearance and texture on the inside as they are denser and more fibrous. 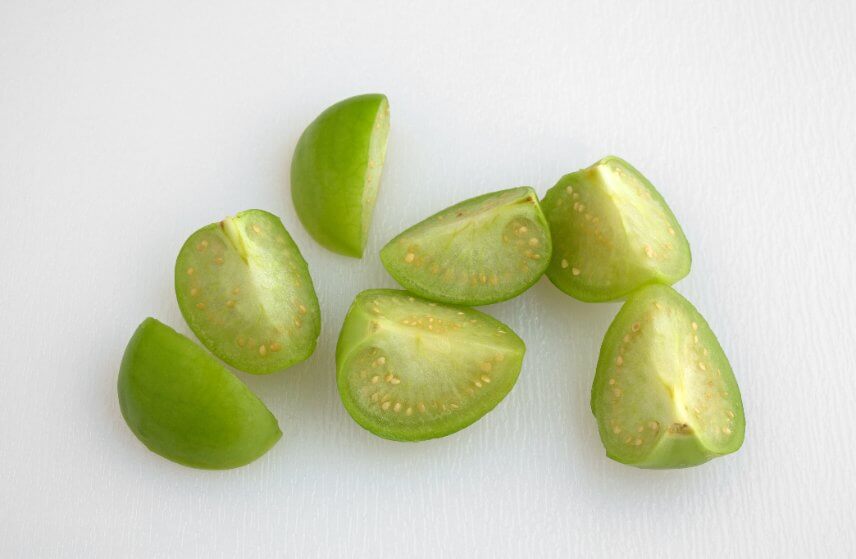 As far as taste goes, raw tomatillos are sour and acidic. When cooked, they take on a sweeter, milder flavor. However, they are not quite as sweet as tomatoes are.

Another common misconception about tomatillos is that they are spicy. However, this is not the case. This belief likely stems from their use in spicy green sauces, which also use peppers.

When preparing tomatillos, they must first be removed from their outer husk by peeling it away. Once peeled, they may have a sticky texture on the outside. This has a tendency to attract dirt and debris, so it is recommended that they are rinsed in warm water.

Check out the YouTube video below, uploaded by user “Delectable Planet“, demonstrating how to quickly and easily prepare tomatillos:

Once prepared, they can be cooked in a variety of ways, although they are most commonly boiled in water for roughly 5 minutes. Once cooked, the green color will become a slightly paler shade, and they should be soft to the touch while retaining some firmness.

Additionally, they can be roasted in the oven using the broiler, according to the Chili Pepper Madness website. Simply preheat the oven, slice the tomatillos in half horizontally, and bake them on a large pan for roughly 12 minutes.

Another big difference between tomatoes vs tomatillos is how they’re stored. If still in their husk, tomatillos can last for up to 3 weeks if placed in a paper bag and left in the refrigerator.

They can also be frozen, although it is recommended that they be peeled, cleaned, and sliced before doing so.

According to WebMD, tomatillos come with a host of health benefits.

For one, they are packed with natural antioxidants known as lutein and zeaxanthin, which promote eye health.

According to Born For Pets, tomatillo consumption is unsafe for dogs due to a toxic alkaloid it contains known as solanine.

And What About Tomatoes?

Tomatoes are technically a fruit that belongs to the nightshade family, which also includes potatoes, peppers, and eggplants. 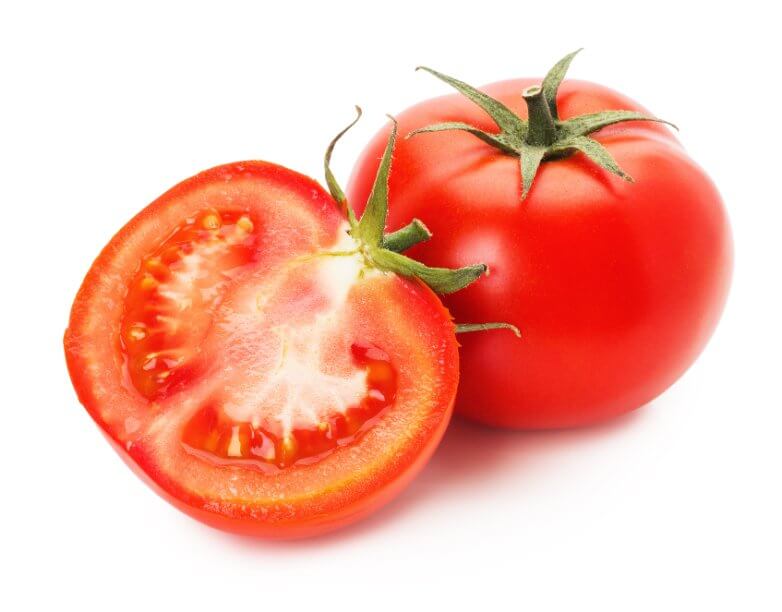 Unlike tomatillos, tomatoes are red or yellow in color when ripe (although they are green before becoming fully ripe.) They can range in size from small cherry tomatoes to large beefsteak tomatoes.

Tomatoes grow best in warm weather and should be planted in an area that gets full sun. They need well-drained soil and should be watered regularly.

Another difference between tomatoes vs tomatillos is that tomatoes come in a greater variety of shapes and sizes, including:

The uses for tomatoes are nearly limitless.

Tomatoes can be used in a wide variety of dishes, including pasta sauces, soups, stews, and salads. They can also be eaten raw, although some varieties work better than others in this context.

Additionally, tomatoes are often sliced and used as a topping for sandwiches, hoagies, burritos, tacos, and burgers. They are also used to make condiments, such as ketchup and marinara sauce.

Compared to tomatillos, tomatoes are softer to the touch and contain more water on the inside. The most noticeable difference between the two is that tomatoes do not grow in a papery husk as tomatillos do.

As far as flavor goes, tomatoes are milder in flavor, although slightly sweeter than tomatillos. They can be bitter if the seeds are not removed. And unlike tomatillos, tomatoes are much more enjoyable when eaten raw as they do not contain a sour taste.

Due to how versatile they are, tomatoes can be prepared in a countless number of ways. Whether you’re making pizza sauce, quesadillas, marinara, or even a salad, the preparation protocol will be determined by how you intend to use them.

Generally speaking, however, tomatoes should always be rinsed before consumption to remove any unwanted dirt or debris. It’s also a good idea to remove the seeds if possible as they can add a bitter taste. Using a food mill would be the best way to do so.

According to Steamy Kitchen, tomatoes that aren’t yet ripe should be stored at room temperature and uncovered.

Once ripened, they will last only a handful of days. Refrigeration is recommended for ripened tomatoes that will not be consumed within the next day or two. When refrigerated, tomatoes can last up to 2 weeks, although they can last up to 12 months in the freezer.

When it comes to health benefits, both tomatoes and tomatillos have much to offer.

The flagship health benefit of tomatoes is that they contain a carotenoid known as lycopene, which is responsible for giving tomatoes their red color.

Lycopene’s main benefit is its antioxidant activity, which is associated with reduced cancer risk and better heart and skin health, according to WebMD. It’s also associated with improved fertility in men and may even assist with pain relief.

It should be noted that although fresh tomatoes contain lycopene, canned tomatoes have been shown to contain a far greater quantity.

According to American Kennel Club, dogs can have ripe tomatoes in small quantities.

Let’s have a look at the nutritional differences between tomatoes and tomatillos.

The table below compares the nutrition facts of a 100-gram serving of tomatoes with an equally weighted serving size of tomatillos:

As you can see, the nutritional profile of tomatoes and tomatillos are somewhat similar. They each contain a similar amount of fiber and protein, although tomatillos do contain significantly more calories per serving. That said, their macronutrient ratio is similar when controlled for calories.

Additionally, both tomatoes and tomatillos are an excellent source of potassium– an essential electrolyte and mineral that can lower blood pressure, according to Harvard Health Publishing.

Tomatoes VS Tomatillos: In Summary

Now that we’ve hashed out all of the minutiae, let’s briefly summarize everything we’ve gone over:

Regardless of the differences between tomatoes vs tomatillos, it is clear to see that despite their differences, they each have much to offer in terms of taste, culinary use, health benefits, and nutrients.

As different as they may be, you cannot go wrong with either one!