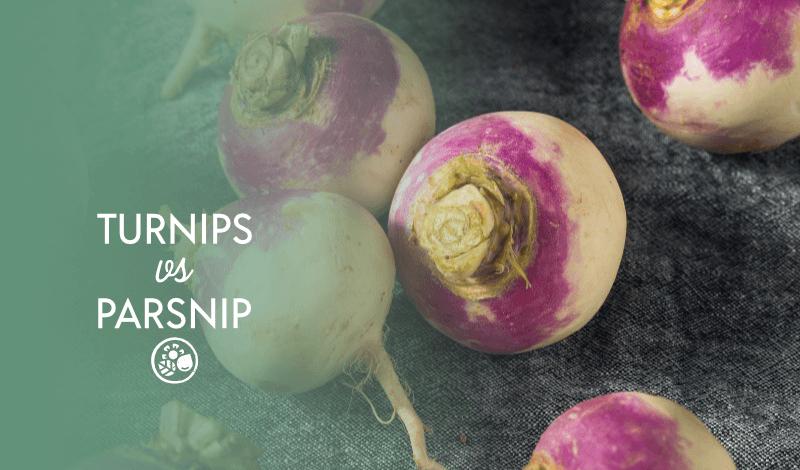 Both turnips and parsnips are lesser-known root vegetables that have much to offer in terms of health benefits and culinary uses. There’s much to learn about them if you aren’t familiar, but in this article we’ll be bringing you up to speed as we compare all of the major differences between turnip vs parsnip.

In short, the difference between turnip vs parsnip is that turnips have an outer skin that should be removed before eating. Turnips also contain fewer calories and carbohydrates. Parsnip, on the other hand, contains more fiber per serving and more vitamins and minerals too.

Turnips are a non-starchy root vegetable that belongs to the Brassica family, which also includes cabbage, broccoli, and Brussel sprouts. 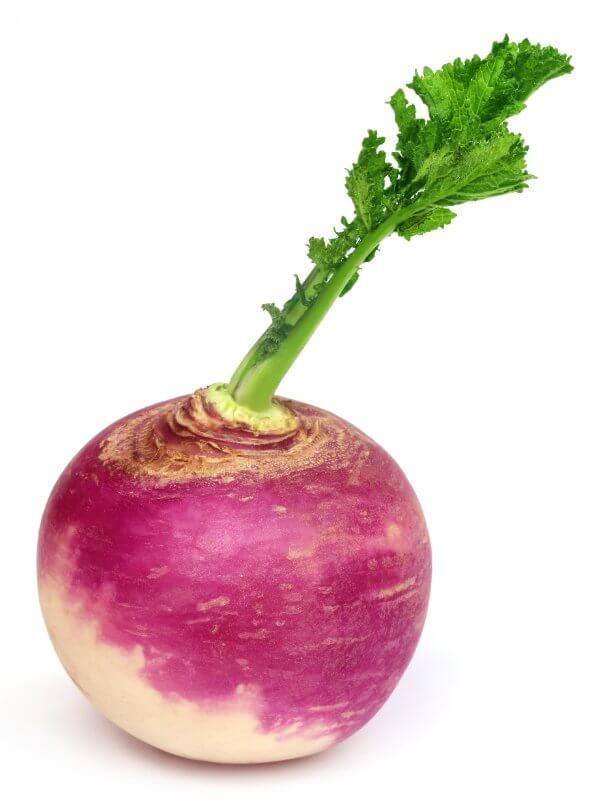 Typically round or oval in shape, turnips have a smooth surface and outer skin that can vary in color ranging from white, yellow, red, and purple. The skin of a turnip is thin and is similar to that of red potatoes.

Beneath their skin, turnips have a firm, cream-colored flesh that can be eaten raw or cooked.

Although the skin of a turnip is edible, it is recommended that it be removed as it can leave a sharp aftertaste, according to the Taste Of Home website.

According to the Almanac website, turnips are a cool-weather vegetable that grows in both the spring and fall. However, they are quite abundant and available year-round in most regions.

The leaves that grow from the root of a turnip extend beyond the surface and are known as turnip greens. They are considered a cruciferous vegetable and are packed with nutrition, according to Medical News Today.

Much like turnips, parsnip is also a non-starchy root vegetable. However, it belongs to the Apiaceae family, which also includes carrots, parsley, and celery. 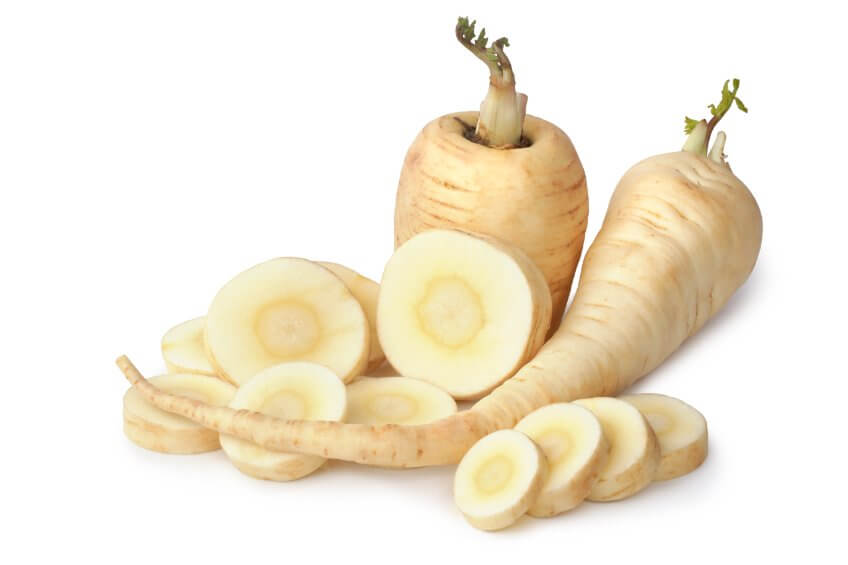 Parsnips are similar in appearance to carrots. They are long and tapered, grown underground; but unlike carrots, they have a creamy white flesh.

One of the first differences you’ll notice between turnip vs parsnip is that parsnips do not have an outer skin like turnips do. Instead, the outer texture is similar to that of a carrot.

According to BBC Good Food, baby parsnips do not need to be peeled. A good rinse is all they need. However, it is recommended that larger parsnips be thinly-peeled with a sharp knife or vegetable peeler.

Parsnips can be consumed either raw or cooked.

Another major difference between turnips and parsnips is that, unlike turnips, the leaves of parsnips are not edible. In fact, they can be quite toxic to humans. According to SFGate, the juice and sap in parsnip tops can cause irritation when contact is made with the skin. Furthermore, it can cause itchy around the mouth, lips and tongue if eaten.

One thing parsnip has in common with turnips is that they too are a cool-weather vegetable. They are planted in the spring and harvested in the winter months before the ground freezes.

Now that you have a brief introduction to each, let’s have a look at some of the ways in which turnips and parsnips differ.

Seeing as how turnips and parsnips are both root vegetables, they tend to be used in similar ways.

Some of the ways turnips can be used include:

Parsnips are used in much of the same ways, including:

Both turnip and parsnip can be eaten raw or cooked, and on their own as a snack or side dish.

Let’s have a look at the difference between turnip vs parsnip as far as taste and texture goes.

According to one Reddit user, the flavor of turnips is somewhat of a cross between carrots and sweet potatoes. They are described as slightly sweet.

Raw turnips are crunchy, but they do soften up when cooked.

Parsnips, on the other hand, have a creamy and nutty taste, as one Reddit user put it.

Parsnips have a mashed potato-like consistency when cooked. When eaten raw, they can be crunchy like carrots, although they are much sweeter than carrots.

Now let’s have a look at how you can prepare both turnips and parsnips.

To prepare and cook turnips:

Once finished, turnips will go from being an opaque white color to more of a translucent whiteness.

To prepare and cook parsnips:

For a working demonstration on how to prepare parsnips, check out the YouTube video by user “MonkeySee” below:

Now let’s have a look at some of the nutritional differences between turnip vs parsnip.

The table below compares a 1-cup serving of peeled and chopped turning with a similar serving size of diced parsnip:

As you can see, both turnips and parsnips have a lot in common nutritionally.

That said, there are some noteworthy differences. Let’s go over some of them.

Turnips Contain One-Third Of The Calories In Parsnip

Possibly the greatest advantage turnips have over parsnips is their caloric density.

A 1-cup serving of chopped turnips contains approximately 1/3rd the calories of an equal serving size of parsnips, clocking in at 36 and 100 calories respectively.

This is important because calories are the unit of measurement we use to gauge energy expenditure, which is the sole determining factor of weight loss according to Mayo Clinic.

This means that if you’re looking to lose weight, turnips are more advantageous as they allow you to eat a greater volume of food for less calories, helping you stay within your caloric budget more easily.

Not only do turnips contain fewer calories than parsnip, but they’re also lower in carbohydrates too.

This makes turnips advantageous for those who may follow a low-carb, or “keto” diet — a diet characterized by eliminating calories from carbohydrates and displacing them with fat and protein sources.

Although neither of these root vegetables could be considered a low-carb food, turnips have the edge here as they contain roughly 1/3rd the carbohydrates of parsnips.

Fiber is an indigestible carbohydrate that the body uses to remove waste. It serves many other functions in the body as well.

According to Mayo Clinic, the benefits of adding fiber to your diet include:

Those seeking to boost their fiber intake will be better served opting for parsnip rather than turnips as the former contains roughly triple the fiber, clocking in at a whopping 6.5 grams per 1-cup serving.

One area where parsnip may have a nutritional advantage over turnips is when it comes to certain vitamins and minerals.

Per serving, parsnip contains more of the following vitamins:

Furthermore, parsnips also contain more potassium– another essential electrolyte and mineral that plays a role in fluid balance, controls the electrical pulses in the body, and can even lower blood pressure, according to Harvard Health Publishing.

The health benefits of turnips are abundant. According to WebMD, turnips contain glucosinolates that may help prevent many different types of cancers.

Additionally, eating turnips can support eye health, thanks to the lutein antioxidant they contain.

Parsnips, on the other hand, have their share of health benefits too. According to WebMD, parsnip can help improve digestion thanks to the fiber content. The vitamin C content also helps in supporting immune health.

Last (but certainly not least) in our comparison of turnip vs parsnip has to do with their safety around our four-legged friends.

As far as turnips go, both raw and cooked turnips (as well as turnip greens) are safe for dogs, according to Rover.com. In fact, dogs can enjoy much of the same health benefits from eating turnips that us humans do!

Parsnips, both raw and cooked, are also safe for dogs to eat, according to Tails.com. However, the parsnip tops (which include the leaves and stem) should be avoided.

As we’ve gone over in this article, there are many differences between turnip vs parsnip. That said, they also have a lot in common. Both are root vegetables with health-promoting properties that can be eaten raw or cooked.

The biggest difference between the two might just be their taste, so give each a try and see which suits your preferences more.