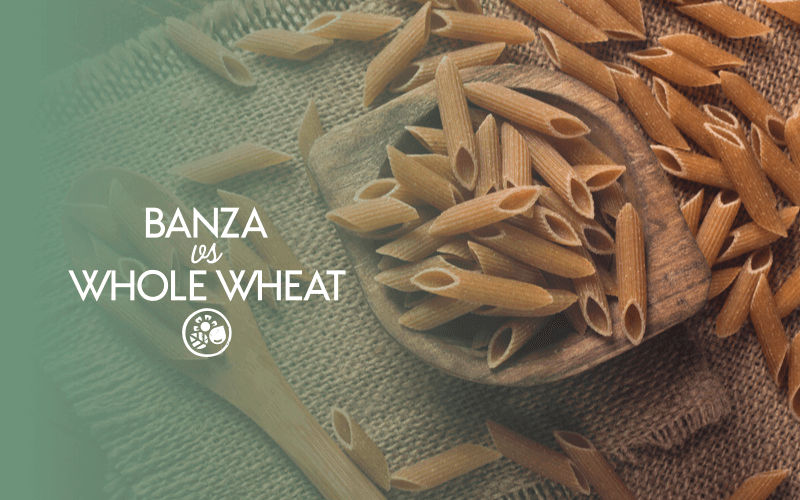 For those looking for alternatives to regular wheat-based pastas, there’s no shortage of varieties on your grocery store shelves to choose from. These pasta alternatives can differ in taste, nutrition, and even the ingredients used to make them. One example of such would be Banza — pasta made of chickpeas instead of wheat. When it comes to Banza vs whole wheat pasta though, the Banza variety does pack more nutrition, but it has a softer, gummier texture.

In this post we’ll be digging in to all of the differences between these two pasta varieties so you can make an informed decision.

In short, the main difference between Banza vs whole wheat pasta is that the Banza variety contains more protein, minerals and electrolytes. However, whole wheat pasta has slightly less calories, less fat, and more fiber.

Banza is a brand of chickpea pasta, and probably the most well-known brand.

Chickpea pasta is pasta that is made with chickpea flour instead of the traditional durum wheat and semolina-based pastas that you’re most likely familiar with.

Much like your standard wheat-based pastas, Banza chickpea pastas come in a variety of shapes, including:

Consumers tend to opt for pasta alternatives, such as Banza’s chickpea pasta, when they suffer from gluten intolerance. Because it doesn’t contain wheat, chickpea pasta makes for a gluten-free alternative.

Another reason why one might opt for Banza vs whole wheat pasta is because chickpea flour contains more minerals and nutrients than wheat flour does.

Whole wheat pasta is a type of pasta that is made with whole wheat flour instead of semolina flour.

The reason why one may opt for whole wheat pasta over regular pasta is because it contains more fiber, protein and minerals, making it a healthier alternative.

This nutritional advantage doesn’t come without sacrifice, though. Whole wheat pasta tends to have a coarse and grainy texture when compared to regular pasta, making it less enjoyable to eat.

This has opened the door for a more creative approach to pasta-making, such as using chickpeas and lentils instead, forgoing wheat altogether.

Both Banza chickpea pasta and whole wheat pastas can be considered healthier alternatives to traditional durum wheat and semolina-based pastas, but you may be wondering how they stack up when compared to each other.

Let’s break down some of the ways in which Banza and whole wheat pasta differ, starting with nutritional content.

The table below compares the nutrition facts for a single 2 ounce serving of Banza Chickpea Penne and Barilla Whole Grain Penne:

As you can see, both varieties are similar in terms of calories and macronutrients. However, when it comes to minerals and electrolytes, one clearly outshines the other.

The benefits of opting for Banza vs whole wheat pasta are numerous. The following are 5 examples of the advantages you’ll enjoy:

If monitoring your intake of carbohydrates is of concern to you then you’ll be happy to know that Banza chickpea pasta has slightly less carbohydrates per serving than whole wheat pasta does.

Net carbohydrates is the true number of carbs you’ve consumed, because it subtracts fiber grams — an indigestible form of carbohydrate — from the total.

Protein can be hard to come by when following a plant-based diet. However, this is not the case when it comes to Banza chickpea pasta, which packs roughly one third more protein than whole wheat pasta does!

Because of its legume base, chickpea pasta is naturally higher in protein than other pasta varieties are.

Protein is responsible for repairing muscle fibers, ligaments and various connective tissues in the body, among other things.

Athletes and exercise enthusiasts alike can benefit from increasing their protein consumption. However, those who choose to fill their bowl with Banza will benefit more.

Potassium is a mineral and essential electrolyte that is responsible for regulating the electrical pulse in the body. It also plays a role in maintaining hydration and central nervous system function.

Based on a 1990 study published to PubMed, researchers found that hypertensive subjects experienced a reduction in blood pressure when supplementing with potassium. [source]

For those seeking to boost their potassium intake, Banza chickpea pasta would be the wiser choice because it contains nearly twice as much potassium as whole wheat pasta does.

Iron is an essential mineral that is partially responsible for transporting oxygen throughout the body, among other things.

A lack of iron in the diet can lead to various health complications, such as anemia, shortness of breath, fast heartbeat, brittle nails, and more. [source]

It is recommended that adult women between the ages of 19 and 50 get 18 mg of iron per day. Men of a similar age, on the other hand, only require 8 mg.

Opting for Banza chickpea pasta will get you roughly 30% closer to your daily needs than the whole wheat variety will.

5. Contains twice as much calcium

Among the various nutritional advantages chickpea pasta has over whole wheat pasta is calcium — another mineral and essential electrolyte that is responsible for maintaining strong bones and good bone health. [source]

Although the benefits of Banza outweigh that of whole wheat pasta, that doesn’t mean the latter isn’t without its own advantages. Let’s examine a few of them:

A 2007 study published to PubMed concluded that fat loss depends entirely on an energy deficit. [source]

One of the ways that energy is measured, in context to the human body, is in calories.

If calories are at a premium then whole wheat pasta would be the frugal choice because it contains roughly 5% less calories per serving.

This may not seem like much, but when scaled up to the context of a daily diet, it could be the difference between hundreds of calories.

A diet low in fat can help reduce the risk of various health complications, such as insulin sensitivity, coronary heart disease, hypertension, and more. [source]

One of the benefits that both Banza and whole wheat pasta share is that they’re both relatively low in fat. However, whole wheat pasta gains the advantage here because it contains less than half the total fat content per serving as Banza chickpea pasta does.

Finally, whole wheat pasta gains another edge when it comes to fiber content, as it contents modestly more fiber than Banza does, clocking in at 7 grams and 5 grams respectively.

This may come as a surprise to some, as legumes (such as chickpeas) tend to be known for their dense fiber content.

Fiber is an indigestible form of carbohydrate that, when ingested, has many health promoting properties:

Now that we’ve sorted through all of the nutritional differences between Banza vs whole wheat pasta, let’s give consideration to the taste and texture of each.

Unfortunately, neither chickpea nor whole wheat pasta can match the soft, tender texture and mild taste of traditional semolina-based pastas. However, they do differ from each other in this regard.

When compared to regular pasta, chickpea pasta tends to have a more mushy and gummy texture, meaning it falls apart more easily.

Whole wheat pasta, on the other hand, holds its form better, but it has a coarse and grainy texture that could negatively impact certain dishes and preparations.

By now it should be evident that both pasta varieties make for a healthier alternative to traditional pasta, but when it comes to Banza vs whole wheat pasta, there are several differences to consider.

Although the scales tip in favor of chickpea pasta when it comes to nutrition, whole wheat pasta has its share of advantages as well. The variety you choose should depend entirely on your own personal needs.

Either way, you’ll be making a wise choice, as both products have much to offer.