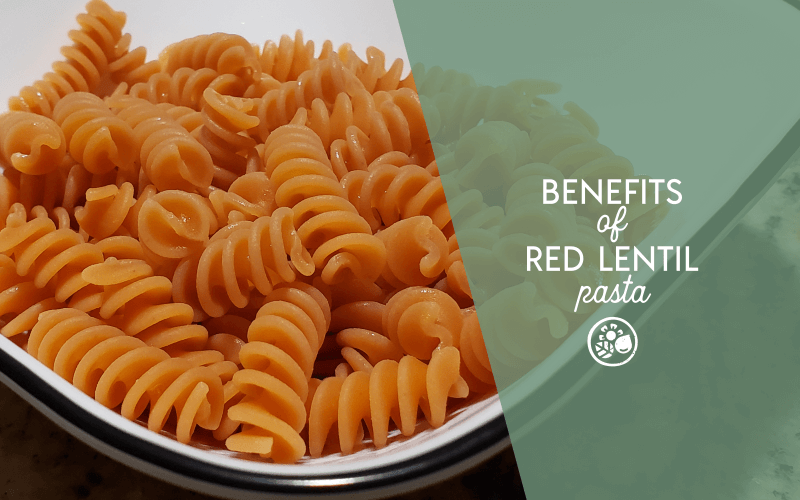 If you’re a health-conscious person who enjoys a good bowl of pasta as much as I do then you’ve probably heard by now of all the different types of pasta that substitute something else for wheat durum. There’s spinach pasta, bean pasta, chickpea pasta, and so much more. One that you may want to really consider though is red lentil pasta. The benefits of red lentil pasta vs regular pasta are stacked so high that it’s a no-brainer. Making this minor adjustment to your diet is worth it.

Red lentil pasta is like any other pasta, only with one big difference — the ingredients used to make it. 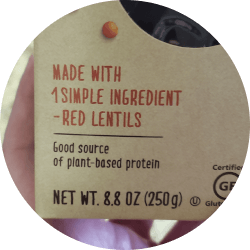 Pasta is traditionally made from an unleavened dough comprised of durum wheat flour, usually mixed with water and/or eggs. However, you don’t have to use durum wheat to make pasta, you can use other ingredients, like lentils.

Lentils are small edible lens-shaped vegetables known as legumes, and they make a great alternative to durum wheat because their health benefits are plentiful.

Adding lentils to your diet can benefit you by contributing significant amounts of nutrition that you may otherwise be missing out on.

Lentils are an excellent source of fiber. Just 1 cup of red lentils packs 16 grams of it!

In 2010 the Dietary Guidelines for Americans Advisory Committee concluded that there is evidence to suggest an association between potassium intake and a reduction in blood pressure in adults, which influences the risk of stroke and coronary heart disease.

Modern Western diets tend to be lacking in potassium, and lentils just so happen to be one of the highest sources of dietary potassium! Just a single cup of boiled red lentils can provide you with approximately 731 mg of potassium!

The benefits of adding protein to your diet are numerous. Protein is responsible for repairing tissue in the body, it can help increase muscle mass and strength, it can reduce your appetite, and boost your metabolism.

If you’re following a plant-based diet that excludes most (or all) animal products, you may find it challenging to identify foods that can provide you with adequate amounts of protein. This is where lentils really shine. That single 1 cup serving of red lentils packs 18 grams of protein! And if protein is a top priority for you, you can opt for lentil variations with even more protein, like French Green and Puy Lentils.

Considering the nutritional punch that lentils pack, it’s safe to say that any pasta that’s made with lentils is going to come with many of those same benefits. Let’s compare some of the benefits of red lentil pasta versus regular durum wheat pasta. 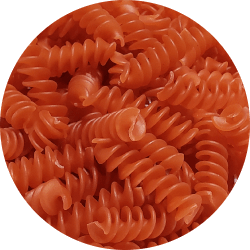 The following benefits are based on a comparison of a single 56 gram serving of Barilla Red Lentil Rotini versus Barrilla’s standard penne pasta.

Red lentil pasta benefits anyone who may be striving to reduce their caloric intake. A single serving of red lentil pasta contains 5% less calories than its wheat counterpart.

Barilla’s penne pasta made with durum wheat comes with 3 grams of fiber per serving, whereas its red lentil rotini counterpart packs twice as much at 6 grams for the same serving size!

You no longer have to think of ways to add protein to your pasta dishes. Wheat pasta may only contain 7 grams of protein per serving, but the red lentil variation has nearly double at 13 grams! This makes red lentil pasta an excellent option for anyone looking for ways to make up for any protein deficits they may have in their plant-based diet that they wouldn’t have had if they were still consuming a diet rich in animals products.

Calcium is important for bone health and heart, muscle, and nerve function. Not getting enough calcium in your diet can put you at risk for esteoporosis, osteopenia, and hypocalcemia.

Red lentil pasta beats out regular pasta yet again, coming in with 17 mg per serving, compared to 12 mg found in durum wheat pasta.

Iron is an essential mineral responsible mostly for transporting oxygen throughout the body. Red lentil pasta benefits those seeking more iron at a ratio of 3 to 2 when compared to wheat pasta.

With only 118 mg per serving, wheat pasta doesn’t even have 1/4th the potassium that red lentil pasta has! Just a single serving will provide you with 518 mg, or 10% of your RDA!

There’s good news for you pasta lovers who may also suffer with gluten intolerance: unlike the standard durum wheat pasta, red lentil pasta is gluten free!

How Does It Taste?

Seeing as how the nutritional comparison is no contest, the only thing left to consider is how it tastes compared to regular pasta.

Does it taste similar to wheat pasta? Can you use it in the same dishes? Does it take as long to cook? Just because it looks like pasta that doesn’t necessarily mean it tastes like pasta, or does it? 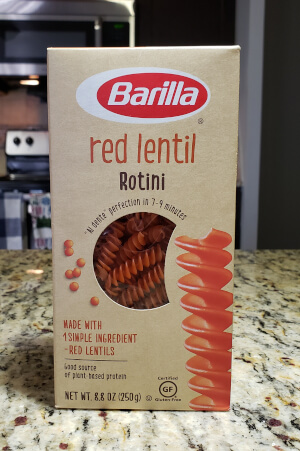 Lately I’ve been eating a lot of Barilla’s red lentil rotini, and I must say, of all the different types of bean pastas, the red lentil variation has a texture and firmness most similar to wheat pasta. I’ve noticed that other variations, like chickpea pasta, have more of a neutral flavor, but it’s kind of soft and gummy when cooked. Red lentil pasta holds its firmness much better in comparison.

As far as taste goes, red lentil pasta does have a bit of a distinct sweet, earthy aftertaste on its own. However, it’s barely noticeable once you dress it up with some of the sauce and toppings you would normally put on your pasta.

At the very least it’s worth a try, and if you don’t like it you can always check out some other pasta alternatives, like chickpea pasta. In fact, I wrote up a comparison of lentil vs chickpea pasta not too long ago if you want to check that out.