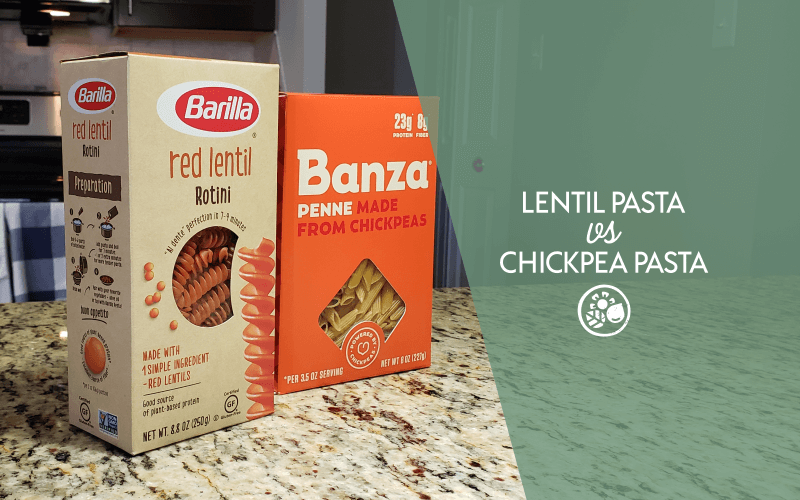 As the world becomes more conscious of their health and food choices, more consumers turn to alternative pasta products. There are lots of gluten-free and vegan options that don’t have the same ingredients or nutritional values as standard semolina pasta. Two of the more popular options are lentil pasta and chickpea pasta. In comparing lentil pasta vs chickpea pasta though, lentil pasta comes out slightly ahead as far as nutritional content goes.

The following table compares the nutrition facts of Barilla’s red lentil Rotini with Banza’s penne made from chickpeas, as well as Barilla’s standard semolina-based penne pasta.

Right from the start, you will see a difference in the nutritional value of chickpea pasta compared to regular pasta. A standard serving is going to have twice the amount of fiber and protein as a wheat-based pasta.

This high-fiber approach is better for our digestion and the health of our bowels. An increase in fiber may also help to improve your heart health by reducing your cholesterol levels and blood pressure. These high-fiber flours are much better than semolina flour as it is nowhere near as rich in nutrients. 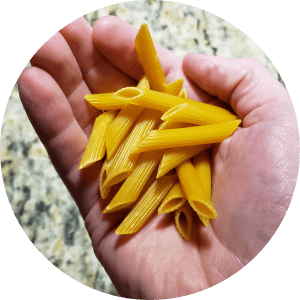 Chickpea pasta is lower in carbohydrates than traditional pasta by 10 grams, and it is gluten-free. That means that not only is it ideal for those with gluten intolerance, but you also aren’t going to feel quite as bloated and heavy after eating this plant-based pasta alternative. Just be aware that this does take longer to digest than normal pasta. This could actually be a good thing though if you struggle with portion control and are prone to snacking. The slower we process the carbs in our meals, the better the chance of using them for energy throughout the day.

Lentil pasta offers the same benefit of extra fiber because it too comes from a bean. But, it seems that the chickpea pasta does have a little bit less fiber. Lentil and chickpea pastas are both significantly lower in carbohydrates than standard semolina pasta though. 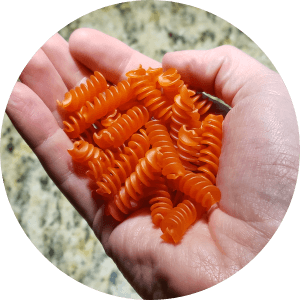 When it comes to protein, you will see the same dramatic difference compared to traditional pasta with around double the amount. Therefore, you can expect many of the same benefits as chickpea pasta. However, the lentil pasta may be slightly healthier than chickpea pasta. It has slightly less calories, slightly less sodium, less than half the fat, and slightly more potassium.

Both lentil pasta and chickpea pasta are also appealing because they are high in iron and potassium.

Potassium is important for muscle health, blood pressure, and nerve signals. A diet rich in potassium can protect our hearts, kidneys, and bones. So, some extra potassium in our pasta is an added benefit.

Extra iron will help us look after our immune system and energy levels. It is essential for our red blood cell counts, and those that are deficient could develop anemia. Both lentil and chickpea pasta contain more iron than traditional semolina pasta.

The protein-rich nature of lentils, beans, peas, and other legumes can be a great alternative for anyone seeking to embrace a plant-based diet. If you have adopted a full-on vegetarian diet, or simply want to cut meat from a few meals, chances are you’ll need to make up for some lost protein. Legume-based pastas can help fill that void.

The difference in calories between chickpea, lentil, and regular pasta is negligible; so you won’t be sacrificing food volume and a feeling of fullness if you switch to one of the alternatives.

Not all pasta products are created equally. Different brands will have slightly different ingredients and additives. Check to make sure that there is a good amount of either chickpea flour or lentil flour, and watch out for other ingredients and fillers.

If you are making the switch to go vegan then check the certification on the box.

Some will say that lentil pasta is the better tasting option. Opinions will vary, but lentil pasta seems to have a texture closer to traditional pasta than its chickpea counterpart. Some pasta alternatives can get a bit weird and grainy, but this doesn’t seem to be as common with the lentil options.

By comparison, some find that the chickpea pasta can leave a bit of bitter taste.

You are going to get a different taste and texture either way because of the ingredients used. However, you shouldn’t let that put you off. After all, we don’t buy pasta to eat it plain. The pasta itself only becomes interesting in taste if we add other ingredients. Even if you find the taste of chickpea or lentil pasta weird at first, you can always dress it up with different sauces and seasonings. The pasta was only ever meant to be a neutral base. The focus should be on nutritional value.

The differences between lentil pasta vs chickpea pasta are negligible. Either one is a great substitute for standard traditional pasta.

Which Is Best for You?

There isn’t all that much separating lentil pasta from chickpea pasta. The best thing to do is to give them both a try and see how they cook and how they taste. Either way, you are sure to get a more nutritious meal than with traditional semolina pasta.