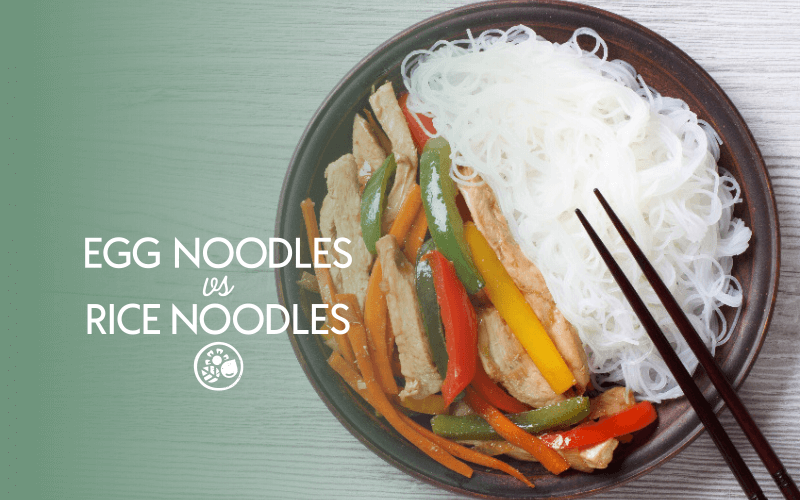 Yesterday we did an extensive comparison of rice noodles and vermicelli. Because vermicelli is wheat-based, it was found to contain more key nutrients, such as fiber and protein. Today, we’ll be comparing egg noodles vs rice noodles to determine what their nutritional differences are and if one has an advantage over the other.

In short, the difference between egg noodles vs rice noodles is that egg noodles are made using eggs. Because of that, they contain cholesterol and more fat than rice noodles. However, they come with the benefit of containing significantly more protein and iron per serving.

That said, there are other factors to consider when comparing these two noodles varieties. Let’s have a closer look.

What’s The Deal With Egg Noodles?

Eggs are mixed with flour and yeast to create a clay-like consistency, then sliced and cooked into strips of noodles that often take on a flat and spiraled shape.

The benefit of using eggs to make noodles is that the egg acts as an emulsifier, binding the flour and liquid together, which results in a chewy, gummier texture than rice noodles.

Because egg noodles contain eggs, however, this means that they are not a vegan food as they contain animal products. This has an impact on its nutritional contents (more on that later.)

As for flavor, egg noodles have a mild egg-like flavor. Because of their shape, texture, and flavor, culinary uses for egg noodles tend to be limited to casseroles and stews.

What About Rice Noodles?

Rice noodles are made using rice flour, which is different from traditional noodles, which are made with semolina and wheat.

A modern-day staple in many Southeast Asian cuisines, rice noodles have been around for over 2,000 and originated in China.

Unlike egg noodles, rice noodles essentially have no flavor, making them a versatile base for many recipes and cuisines.

Another big difference between egg noodles vs rice noodles is that rice noodles are vegan, meaning that do not contain any animal products.

Now that we’ve gone over the practical differences between egg and rice noodles, let’s have a look at how these two noodle varieties stack up in terms of nutrition.

The table below compares a 1-cup cooked serving of egg noodles with an equal serving size of rice noodles:

As you can see, each noodle variety has much in common:

Now let’s have a look at what separates them nutritionally.

Rice Noodles Are Lower In Fat

One of the biggest nutritional differences between egg noodles and rice noodles is their fat content.

Because egg noodles are made with eggs, they contain significantly more fat per serving, clocking in at 3.3 grams for 1 cup.

This doesn’t make it a high-fat food in particular, but it’s still significantly more than rice noodles, which only contain 0.4 grams of fat for an equal serving size.

This means that for those seeking to keep their fat intake at a minimum, rice noodles would be the wiser choice.

Rice Noodles Do Not Contain Cholesterol

Another difference between egg noodles and rice noodles is that the egg variety contains cholesterol– a waxy substance found in animal-based foods that may have an impact on health– especially for diabetic patients, says the Harvard School Of Public Health.

That said, cholesterol is somewhat of a controversial subject with opinions that vary by source. Regardless, the FDA recommends limiting cholesterol intake to no more than 300 mg per day.

Because egg noodles are made with eggs, 46.4 mg of cholesterol per 1-cup serving.

Rice noodles, on the other hand, do not contain any cholesterol.

Possibly the greatest nutritional advantage that egg noodles have to offer over rice noodles is their protein content.

Because they are made with eggs — which are a high-protein food — egg noodles pack a whopping 7.3 grams of protein per cup! By comparison, rice noodles only contain 1.6 grams for the same serving size, which is less than 25% of what egg noodles have to offer.

Protein is important because it helps the body build and repair muscle tissue, and can even help boost metabolism.

Another benefit you’ll enjoy when opting for egg noodles over nice noodles is the iron they contain.

Iron is an important mineral that helps transport oxygen in the blood. According to the National Institutes Of Health, iron deficiency can lead to symptoms such as tiredness, weakness, lack of energy, trouble concentrating, and more.

A cooked cup of egg noodles provides 2.4 milligrams of iron, which is 13% of the Daily Value. Rice noodles, by comparison, only contain a meager 0.2 milligrams for an equal serving size.

Egg Noodles Are Slightly Lower On The Glycemic Index

The final advantage of egg noodles we’ll be examining for this comparison has to do with the Glycemic Index, or “GI” for short– a scale that rates foods from 1 to 100 based on how much they spike blood sugar.

A higher number represents a great spike in blood sugar, whereas a lower number means a lesser spike. This can be a helpful tool for diabetic patients.

As it turns out, rice noodles have a GI of 65, which classifies them as a medium-GI food. Likewise, egg noodles are also a medium-GI food, but they score slightly lower at a GI of 57.

Whether you’re looking to avoid animal products or boost protein consumption, there is much to consider when comparing egg noodles vs rice noodles. Although they are similar in calories and carbohydrate content, there are other significant differences in nutrition that may have an impact on health.

Last week we went over the differences between russet and red potatoes. As it turns out, the biggest difference between the two is how they're used culinarily. Nutritionally, there is hardly a...