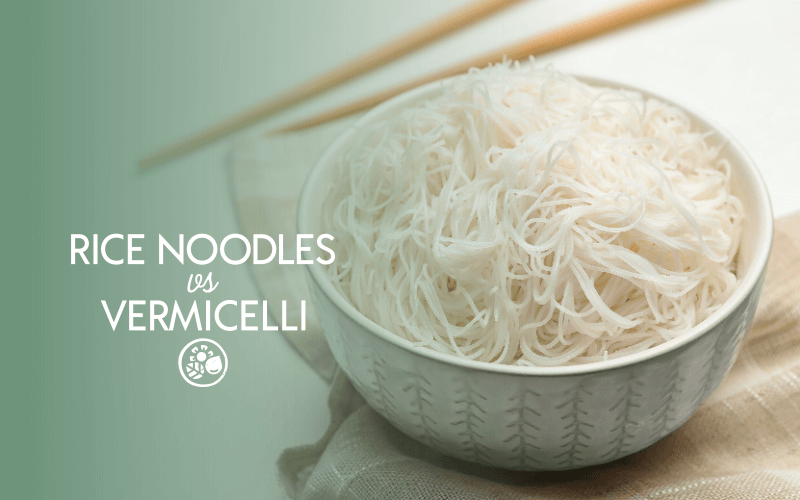 There is no shortage of noodle varieties available on the market– many of which we’ve covered extensively in previous articles. In today’s article, however, we’ll be comparing rice noodles vs vermicelli noodles to determine if one is more advantageous than the other.

That said, there is much to consider when comparing these two types of noodles. Let’s have a closer look.

What’s The Deal With Rice Noodles?

Rice noodles are a type of noodle that is made from rice flour, as opposed to traditional pasta noodles which use semolina and wheat flour. 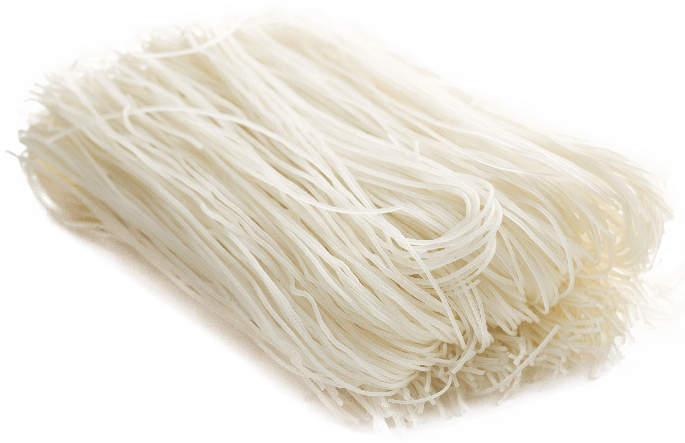 Traditionally used in Chinese cuisine, rice noodles have been around for over 2,000 years and have become a modern-day staple throughout Southeast Asia.

Rice noodles are a somewhat blank canvas in that they don’t contain much flavor on their own, but they do pair well with various sauces and broths. They are most commonly used in salads, soups, and stir-fries.

1. Rice Noodles Are Made From Rice Flour

The biggest difference between rice noodles and vermicelli is the ingredients used to make them.

As previously mentioned, rice noodles are made using rice flour and water. However, tapioca and cornstarch are occasionally used as ingredients as a way to make them more gelatinous.

“Vermicelli” is a term used to describe any kind of thin pasta that is round in shape.

For this comparison, we will be focusing on the traditional kind of vermicelli which is made from wheat, and not to be confused with rice vermicelli, which is essentially the same as rice noodles as they are made from the same ingredients.

Vermicelli is commonly used in much the same way rice noodles are– in salads, soups, stir-fries, and more.

2. Vermicelli Is Made From Wheat

Unlike rice noodles, vermicelli is made using wheat flour, which has a pretty significant impact on nutritional content and health benefits.

It’s also an important detail for anyone who suffers from Celiac Disease or any kind of gluten insensitivity– a condition characterized by an inability to properly digest a protein found in wheat known as gluten.

Rice noodles are gluten-free, whereas wheat vermicelli is not.

Now that we’ve gone over the practical differences between these two noodle varieties, let’s have a look at how they stack up nutritionally.

The table below compares a 1-cup serving of cooked rice noodles with an equal serving size of cooked wheat vermicelli:

As evident in the nutrition data, rice noodles and vermicelli are similar in several ways:

One of the nutritional advantages that rice noodles have over vermicelli is that they are lower in calories, which is beneficial for anyone looking to shed unwanted pounds.

This is likely due to the ingredients used to make them. Rice flour produces noodles that are lighter in weight, whereas wheat flour is denser, meaning a 1-cup serving of wheat-based vermicelli will pack more calories than a 1-cup serving of rice noodles.

When controlled for weight, rice noodles have even fewer calories!

Another slight advantage that rice noodles have over vermicelli is that they contain less fat per serving.

Although neither noodle variety is particularly high in fat, those seeking to keep their fat intake at a minimum would be better off opting for rice noodles as they only contain 0.4 grams of total fat per 1-cup serving.

Vermicelli, on the other hand, contains 2.4 grams.

Possibly the biggest nutritional advantage of opting for wheat-based vermicelli over rice noodles is the fiber content.

Fiber is an indigestible type of carbohydrate that is tasked with removing waste from the body, among many other functions in serves. It also feeds gut bacteria and can help lower cholesterol, improve bowel health, and control blood sugar levels, according to Mayo Clinic.

A single 1-cup serving of vermicelli packs 5.5 grams of fiber, which is three times as much as rice noodles, which clocks in at a meager 1.8 grams for an equal serving size.

If protein is of importance to you then the choice between rice noodles vs vermicelli could not be more clear. Vermicelli packs a whopping 8.4 grams of protein per 1-cup serving! This is five times as much as rice noodles, which only contain 1.6 grams for the same serving size.

Protein is important because the body uses it to build and repair muscle tissue. It can also help boost metabolism by increasing levels of satiety, says Healthline.

Those following vegan, vegetarian, and plant-based diets often struggle to reach their protein goals as most plant-based foods are low in protein. Incorporating vermicelli into your diet can help get you closer to reaching your daily goals.

7. Wheat Vermicelli Is Also Lower On The Glycemic Index

Finally, vermicelli comes with the advantage of being lower on the Glycemic Index than rice noodles.

The Glycemic Index, or “GI” for short, is a scale from 1 to 100 that rates foods based on how much they may spike blood sugar levels, which is a useful tool for diabetic patients. The higher the number, the greater the blood sugar spike. Likewise, a lower number means a lesser blood sugar spike.

In conclusion, the key takeaways when comparing rice noodles vs vermicelli are:

Those seeking noodle varieties that pack a greater nutritional punch may want to consider checking out red lentil pasta or even chickpea pasta!

Last week we went over the differences between russet and red potatoes. As it turns out, the biggest difference between the two is how they're used culinarily. Nutritionally, there is hardly a...