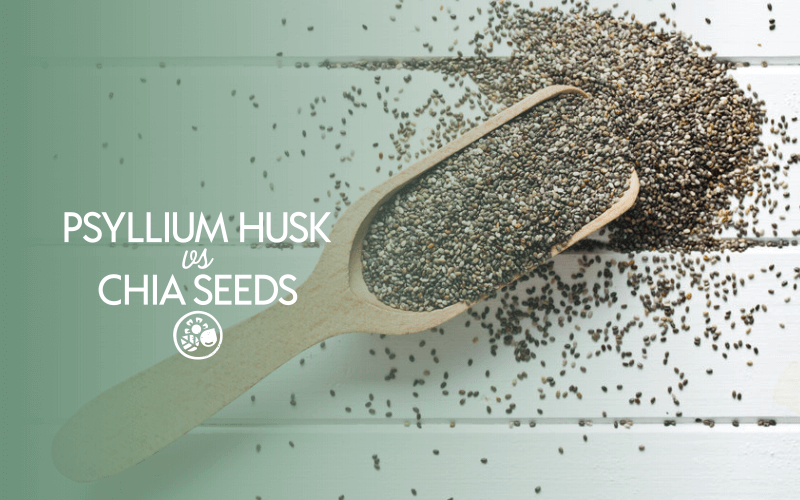 Whether you’re looking to improve digestive health or lower cholesterol, supplements like psyllium husk and chia seeds provide for a small, but dense, source of dietary fiber. And although both are beneficial in their own regard, the differences between psyllium husk vs chia seeds are vast. These differences should be taken into consideration when choosing between the two, depending on your dietary needs.

In short, the primary difference between psyllium husk vs chia seeds is that psyllium husk is lower in calories and has no dietary fat, whereas chia seeds contain omega-3 fatty acids, protein, and none of the additives (such as sugar and artificial food colorings) commonly found in psyllium husk products.

Let’s elaborate on this some more.

What Is Psyllium Husk?

Psyllium husk is made by grinding the seeds of the Platago genus of plant into a powder form.

Commercially, it is sold over-the-counter as a dietary fiber supplement that can be mixed with water or added to various other food items.

The most well-known psyllium husk product would most likely be the Metamucil brand, but there are many different brands and generics that can vary by price, quality, flavor, or additives used.

How Psyllium Husk Is Consumed

Psyllium husk typically comes in a jar, in powder form, with some other ingredients added. It also comes in various other forms, such as:

What Is Psyllium Husk Used For?

Psyllium husk is primarily used to supplement diets that are lacking in fiber for one reason or another, and it has many proven benefits:

Most of the benefits to be reaped from supplementing with psyllium husk are believed to be due to its fiber content, which is a primary reason why consumers use it in the first place.

What Are Chia Seeds?

Native to southern and central Mexico, chia seeds are tiny edible seeds that originate from the Salvia Hispanica plant.

Much like psyllium husk, chia seeds are dense in fiber and can be used to supplement a diet lacking in fiber. Not only that, but they also contain omega-3 fatty acids that are otherwise difficult to find in plant-based foods.

When soaked in water, they swell up to 12 times their size and produce a gelatinous consistency.

What Are They Used For?

Chia seeds serve a variety of purposes aside from supplementing fiber, including:

The health benefits of chia seeds are abundant, and they can be used for more than just adding fiber to your diet. In fact, these benefits could influence the choice you make between psyllium husk vs chia seeds.

Let’s have a closer look at how psyllium husk and chia seeds compare to each other, starting with their nutritional content.

The table below compares the nutrition facts of the Metamucil Orange Smooth Fiber brand of of psyllium husk with the Bob’s Red Mill brand of chia seeds:

It should be noted that this table only compares a single brand of psyllium husk, and in a single variety. There are countless varieties to choose from, such as sugar free alternatives.

These varieties could impact the comparison between psyllium husk vs chia seeds, so make sure to always check the nutrition facts label.

Let’s examine some of the benefits you’ll enjoy when opting for a psyllium husk supplement over chia seeds.

One of the greatest advantages to supplementing with psyllium husk is that it’s a great way to add fiber to your diet without adding too many calories.

According to a 2007 study published to PubMed, researchers concluded that weight loss depends entirely on an energy deficit — or in other words, consuming less calories than you use. [source]

This may not seem like much, but when scaled up to large doses it can have a significant impact on your caloric intake, making psyllium husk the wiser choice for anyone looking to reduce their caloric intake.

One of the reasons why psyllium husk has fewer calories per serving than chia seeds do is because it contains less fat, which represents 9 calories for every 1 gram.

Although the fat in chia seeds tends to be a healthier variety of fat, psyllium husk would still be a wiser option for someone looking to boost their fiber intake while not adding to their consumption of dietary fat.

Despite the benefits that a supplement like psyllium husk has to offer, you can only reap them if you’re able to stomach the taste of it.

For some consumers, taste can be the deciding factor between psyllium husk vs chia seeds — a battle that psyllium husk wins handedly, thanks to the added sugars and flavor varieties that are widely available.

This means that you can add fiber to your diet and enjoy all of the health benefits that come with it without having to hold your nose and endure something that you do not like the taste of.

Now that we’ve gone over a few of the benefits that psyllium husk has to offer, let’s examine the advantages of opting for chia seeds instead.

If getting more fiber is your primary concern then you would actually be better served opting for chia seeds, as a single tablespoon serving contains 5 g of dietary fiber versus the 3 g found in an equal serving size of psyllium husk.

The benefits of a high-fiber diet span far and wide. According to the Mayo Clinic, some of these benefits include:

Seeing as how chia seeds can pack so much fiber in such a small serving size, it wouldn’t be unreasonable to expect to add substantial amounts of fiber to your diet by consuming chia seeds more regularly.

Has no sugar or other additives

Another major benefit of reaching for that bag of chia seeds instead of the Metamucil jar is that you won’t be ingesting all of the additives commonly found in psyllium husk supplements and products.

Chia seeds, on the other hand, are an unprocessed whole plant food, meaning that when consumed whole, there are no added sugars, artificial food colorings, or any other additives.

Anyone following a plant-based, vegan, or vegetarian diet knows just how difficult protein can be to come by.

Protein is partially responsible for repairing muscle fiber and other soft tissue that is broken down from exercise, sports, and various other metabolic activities. [source]

When it comes to plant-based protein, lentils may be the best bang for your buck. But if getting more protein is a priority for you then the choice between psyllium husk vs chia seeds is clear. Chia seeds contain 3 g of protein per serving, whereas psyllium husk essentially has none.

The final advantage you’ll enjoy when choosing chia seeds over psyllium husk — and possibly the greatest benefit of all — is that chia seeds contain omega-3 fatty acids.

Omega-3’s are a family of essential fatty acids that your body needs, for a variety of reasons, but cannot produce. Adding more foods that are rich in omega-3 fatty acids can help reduce inflammation in the body. [source]

There are three main types of omega-3 fatty acids — all of which are required by the body:

Chia seeds, although lacking in EPA and DHA, are an excellent source of ALA omega-3 fatty acids that can help bring you closer to your daily needs. [source]

Psyllium husk, on the other hand, contains no omega-3 fatty acids whatsoever.

All things considered, it wouldn’t be unreasonable to conclude that chia seeds are the clear winner in the matchup between psyllium husk vs chia seeds, and for various reasons:

That said, psyllium husk may be the better option for you if you’re trying to keep caloric intake and dietary fat consumption to a minimum.

In the end, both products can have a profound impact on your health when consumed. Regardless of the product you choose, there are benefits to be had either way.