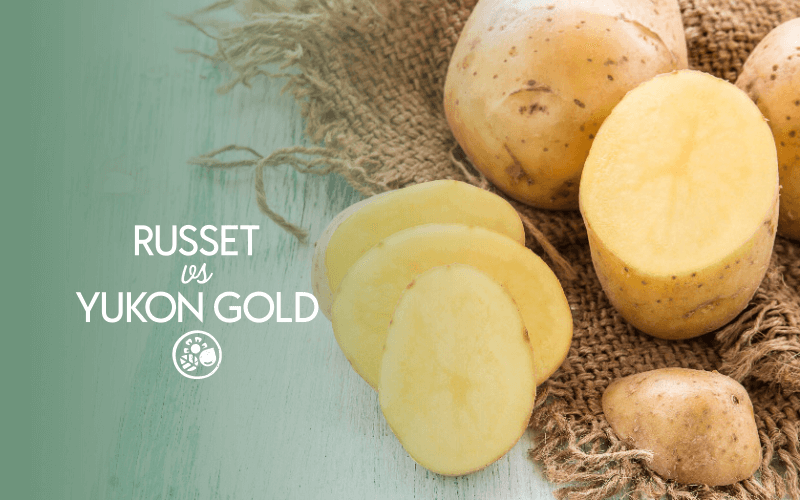 Last week we went over the differences between russet and red potatoes. As it turns out, the biggest difference between the two is how they’re used culinarily. Nutritionally, there is hardly a difference. The same cannot be said for Yukon Gold potatoes, however. They vary from the russet variety in many more ways, and in this article we’ll be examining some of those differences as we compare russet vs Yukon Gold potatoes.

That said, there is much more to consider when choosing between these two tubers. Let’s have a closer look.

Russet potatoes are big, white, starchy potatoes with a tough brown skin and eyes that will sprout if left unattended long enough. 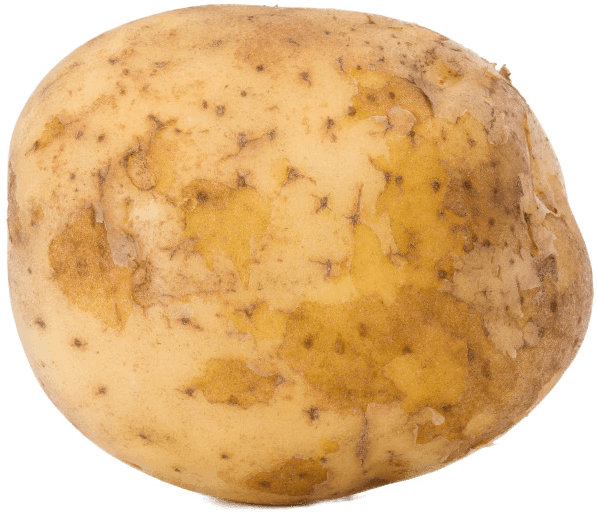 They go by many different names (such as Idaho potato) and are the classic potato variety used to make French fries, mashed potatoes, and more.

One of the biggest differences between russet and Yukon Gold potatoes is how they’re used. Russet potatoes offer far more versatility when baking and cooking.

Thanks to their large size and starchy texture, russet potatoes are one of the most commonly used for:

Although Yukon Gold potatoes can technically be used in all of these ways, they are not the ideal choice due to their smaller size and waxy texture.

The Yukon Gold potato was engineered in the 1960s by selective breeding. They are smaller in size than russet potatoes and have a smoother skin without eyes.

Yukon Gold potatoes differ from the russet variety in many ways.

The most noticeable difference between Yukon Gold and russet potatoes is their color. 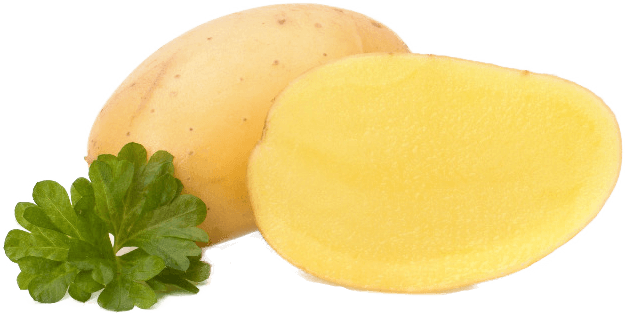 Yukon Gold potatoes have a yellow-tinged flesh, hence the “gold” name. This is because they were created by cross-breeding with a Peruvian variety of potato that contains anthoxanthins– a type of flavonoid pigment that gives them their yellow color.

Another key difference between Yukon Gold potatoes and the traditional russet variety is their skin.

Russet potatoes have a tough, leathery skin that can be bitter and unpleasant if not sufficiently cooked.

Yukon Gold potatoes, on the other hand, have a much thinner and smoother skin that can be eaten more easily.

4. They Also Have A Waxy Texture With A Buttery Flavor

Taste and texture is another area where Yukon Gold stands out from other potato varieties– especially russet.

While russet potatoes are known for their dry, crumbly texture and starchy taste, Yukon Gold potatoes have a waxy texture and a creamier — almost buttery — flavor.

This makes them ideal for making mashed potatoes as they require fewer ingredients (such as milk and butter) to achieve that creamy consistency and rich flavor.

While russet potatoes are one of the cheapest and most abundant foods you can purchase, the same can certainly not be said for Yukon Gold potatoes.

Due to popular demand from consumers, Yukon Gold potato sources tend to be depleted quickly, which drives up their price.

Now that we’ve gone over the practical differences between these two potato varieties, let’s have a look at how they stack up nutritionally.

The table below compares the nutrition facts of a single large russet potato (weighing 299 grams) with and equal serving size of Yukon Gold potatoes:

As you can see, both russet and Yukon Gold potatoes share much in common nutritionally. And they’re both nutritional powerhouses for various reasons:

Furthermore, they both contain similar amounts of key vitamins and minerals, including:

That said, these two potato varieties also have some pretty significant nutritional differences. Let’s have a look.

One of the biggest nutritional advantages that Yukon Gold potatoes have over russet potatoes is their caloric content.

This means that for those seeking to shed unwanted pounds, the Yukon Gold variety would be a wiser choice as it allows you to eat a greater quantity of food for fewer calories.

7. Despite Having Fewer Calories, Yukon Gold Potatoes Contain Just As Much Fiber

Usually, fewer calories also means less nutrition, but that isn’t the case when it comes to fiber– an indigestible form of carbohydrate with countless health benefits. These include:

Although Yukon Gold potatoes only contain roughly two-thirds the caloric content of russet potatoes per serving, they somehow manage to pack just as much fiber per serving, clocking in at roughly 7 grams per 299-gram serving.

Not all of the nutritional benefits favor Yukon Gold potatoes. As it turns out, the russet variety has nutritional advantages of its own– one of which being iron.

Iron is a mineral that the body uses to make hemoglobin, which is a protein in red blood cells that helps transport oxygen throughout the body.

Russet potatoes contain approximately twice as much iron as Yukon Gold potatoes, clocking in at 18% of the Daily Value per 299-gram serving. The Yukon Gold variety only contains 8% DV for an equal serving size– not even half as much.

9. They Also Contain Twice As Much Vitamin C As Yukon Gold Potatoes

Vitamin C is a water-soluble vitamin that serves many functions in the body. For one, it acts as an antioxidant by protecting cells from free radical damage. It also plays a role in supporting a healthy immune system and producing collagen– a protein that helps wounds heal.

While both potato varieties are a decent source of vitamin C, russet potatoes are clearly the winner here as a single large potato packs a whopping 64% of the Daily Value!

Yukon Golds, by comparison, only contain 30% DV, which is less than half.

There is much to consider when choosing between russet vs Yukon Gold potatoes. Whether it be nutrition or culinary uses, there are many differences between them.

That said, they each have much to offer regardless of their differences. They are both healthy and delicious sources of plant-based nutrition that can be prepared in countless ways. Whichever you choose, you cannot go wrong!