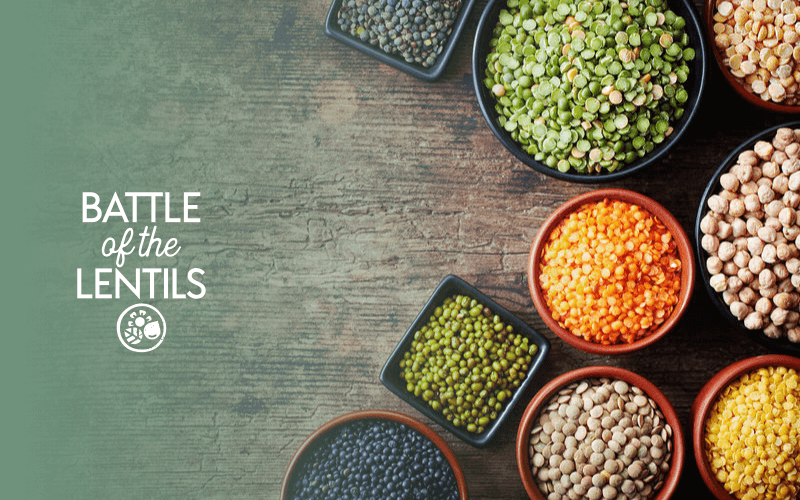 For plant-based enthusiasts looking to boost their intake of protein, legumes — such as beans and lentils — are hard to beat. Two such varieties of legume that are somewhat similar are yellow lentils and red lentils, but how do they compare? Although similar in nutritional content, there are some differences between yellow lentils vs red lentils that should be considered.

Lentils are an excellent source of plant-based nutrition as their nutritional profile could make for an archetype of the perfect food:

When it comes to plant-based foods — or any food for that matter — it’s quite difficult to find something that hits all of those benchmarks.

What’s more, lentils have the added benefit of requiring less preparation time than beans do, making them the more convenient choice among their legume brethren.

That said, not all lentils are created equally. As touched on in a previous post, certain types of lentils contain more protein per serving than others do, which would lead you to surmise that the nutritional content between types of lentils can vary drastically.

In this post we’ll be comparing all of the differences between yellow lentils vs red lentils, as these are two of the more mildly-flavored lentil varieties that would be more welcoming to first-time newcomers.

What Are Yellow Lentils?

Although yellow lentils look similar to yellow split peas, they are in no way the same. In fact, they are different varieties of legumes altogether.

Of all the different lentil varieties, yellow lentils have the most neutral flavor, making them more attractive to anyone who isn’t crazy about the peppery vegetable taste of your standard green lentils.

What Are Red Lentils?

Much like yellow lentils, red lentils are also used quite common in Indian cuisine. However, they aren’t too difficult to find in Western markets and grocery stores, usually located in the aisles set aside for international foods.

Let’s have a closer look at some of the ways in which yellow lentils and red lentils stack up against each other, starting with their nutritional content.

The table below compares the nutrition facts of a 1 ounce serving of dry yellow lentils vs red lentils. The source of the data is linked in each of the product names:

That aside, the nutritional disparity between yellow lentils and red lentils is negligible. On a macronutrient level, they’re nearly identical. However, the variation you decide to go with could be impacted by the importance of these minerals in relation to your own dietary needs. Let’s elaborate.

Potassium is both a mineral and an essential electrolyte that is required for regulating the electrical pulses in the body. Potassium also plays a role in regulating water balance and hydration, as well as central nervous system function.

Based on a 1990 study published on PubMed:

One benefit you’ll enjoy when opting for red lentils over yellow lentils is that the red variety contains roughly 30% more potassium per serving.

This means that if getting more potassium through your diet is a priority for you, then red lentils would be preferable.

One nutritional advantage yellow lentils has over red lentils is that they contain nearly double the iron content per serving!

In short, iron is responsible for transporting oxygen throughout the body. A lack of iron can lead to various medical complication, such as anemia, hair loss, and restless leg syndrome [source].

The National Institutes of Health recommends that adult women consume 18 mg of iron per day, whereas men in a similar age range only require 8 mg per day.

A single 1-ounce serving of dry yellow lentils will provide you with 16% of your daily value needs, whereas red lentils lag behind, offering only 9% DV for the same serving size.

One distinct advantage lentils have over beans is that they require far less preparation time, making them a more convenient choice for anyone on the go. This is because, unlike beans, lentils do not need to be soaked before cooking.

When it comes to yellow lentils vs red lentils though, preparation time is roughly the same.

Traditionally, lentils take about 15-20 minutes to cook. However, the yellow and red variety of lentils — neither of which contain the skin that green lentils have, and have already been pre-split — only take 5-7 minutes to cook.

This makes yellow and red lentils an even more convenient choice among an already convenient food type.

How To Cook Yellow and Red Lentils

To cook either yellow or red lentils:

Once finished, the lentils should be tender to the touch. You can then add your salt and seasonings.

One of the biggest differences between yellow lentils vs red lentils is their taste.

Although yellow and red lentils are both mild in flavor compared to other lentil varieties, red lentils tend to have a slightly more sweet, distinct taste to them.

Yellow lentils, on the other hand, have hardly any flavor. This can make for a great neutral base for a starchy side dish that you can dress up and flavor in any way you’d like.

When cooked, both yellow and red lentils have a soft, almost mushy texture. Unlike green lentils, they tend to break down much more quickly when cooked.

When cooked thoroughly, they have a mashed potatoes-like consistency.

Now that we’ve gone over all of the differences between these two types of legumes, let’s summarize everything in this post:

In short, the choice between yellow lentils vs red lentils may simply boil down (pun intended) to taste.