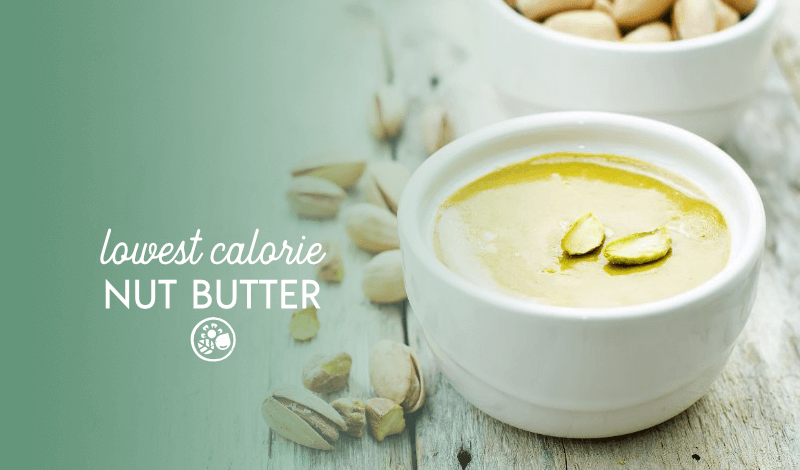 Nut butters are a healthy and delicious way to add flavor to your favorite meals and snacks. The downside, however, is that they tend to be high in calories. This can be problematic for those looking to manage their weight. That said, some nut butters are lower in calories than others, and in this article we’ll be comparing all of them to determine which is the lowest calorie nut butter.

That said, there are other nutritional factors aside from calories that may influence your choice of butter. Read on for a complete comparison.

Why Calories Matter When Choosing A Nut Butter

One of the most important areas of a nutritional label is the calorie count. This is because calories are the unit of measurement used to gauge the energy we consume and expend.

Calories are important when it comes to choosing a nut butter because nuts are high in fat– the most calorically-dense macronutrient, packing 9 calories for every gram.

This means that if you’re looking to shed body weight, nut butters can be disadvantageous because they pack lots of calories in a small volume of food, meaning you have to eat more of it to feel satiated.

Knowing what the lowest calorie nut butter is can help you make an educated decision that is most compatible with your goals.

Let’s have a look at some of the most commonly consumed nut and seed butters and how they compare calorically. It should be noted that we will also be including seed-based butters in this list as well.

The table below compares the nutrition facts of various types of nut and seed butters, ranking from lowest to highest in calories:

As you can see, most nut butter varieties are relatively similar in calorie content, but some do have modest advantages over others.

That said, there is one that sticks out above the rest.

If we’re going to include processed nut butters then the lowest calorie nut butter would be the PBFit brand of powdered peanut butter.

The difference between powdered peanut butter and regular (natural) peanut butter is that the powdered variety has had most of its fat content removed. This leaves behind protein and carbohydrate calories– each of which contains fewer calories per serving than fat.

Powdered peanut butter, such as PBFit, contains a meager 35 calories per 1-tablespoon serving— less than half any other nut butter!

If you’ve left yourself open to seed butters as well, and not just nut-based butter, then sesame butter may be the option for you as it contains less calories than any other minimally-processed butter. 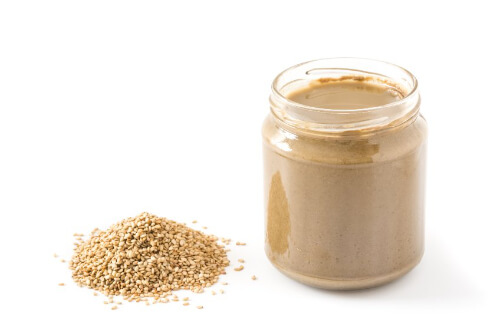 Sesame butter, also known as Tahini, is a light beige-colored creamy spread made from hulled and roasted sesame seeds.

Just a single 1-tablespoon serving of sesame butter contains 89 calories. This is slightly less than all of the other minimally-processed nut and seed butters we surveyed.

If you enjoy the rich, earthy taste of pistachios then pistachio butter may be for you, as it contains fewer calories than any other nut butter (excluding seed butters) that isn’t processed. 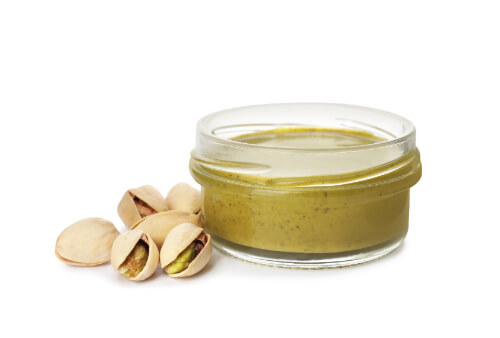 Pistachio butter is somewhat of a rarity that will likely need to be sourced from a specialty foods store, as it isn’t common for it to be available in grocery stores.

If you can get your hands on some, however, you’ll have no shortage of uses for it. You can make overnight oats, smoothies, and even ice cream using pistachio butter.

Pistachio butter will provide you with 90 calories per 1-tablespoon serving– just one less than sesame butter. It also has the most dietary fiber of all nut butters surveyed.

If pistachio butter isn’t your bag then you may be happy to hear that there is another nut butter with just as few calories– hazelnut butter.

Plain hazelnut butter will only cost you 90 calories per 1-tablespoon serving. The downside, however, is that it doesn’t quite contain as much fiber or protein as pistachio butter.

If you’re looking for another seed butter with fewer calories than peanut, almond, or cashew butter, then sunflower seed butter may be your best bet.

Much like sesame butter, sunflower seed butter is made from hulled and roasted sunflower seeds. It’s a creamy, light-colored spread that has a mild nutty taste.

You’ll get 93 calories per 1-tablespoon serving of sunflower seed butter– just 3 calories more than pistachio and hazelnut butter. The downside, however, is that it is on the higher end of the charts in terms of carbohydrates.

Peanut butter is a classic and probably the most consumed of all the nut butter varieties.

In a previous survey, peanut butter was determined to have the most protein of any nut butter. That said, it certainly isn’t the lowest calories nut butter though, clocking in at 94 calories per 1-tablespoon serving.

Furthermore, it also contains more sugar and saturated fat than any other nut butter surveyed– another consideration to keep in mind.

Cashew butter is a creamy and tasteful spread made from shelled and roasted cashews. It has a distinct sweet flavor that separates it from every other nut and seed-based butter.

For those of you who may be fans of the rich, earthy taste of almond butter, you may be disappointed to hear that it’s one of the highest calorie nut butters in existence, coming in at a whopping 101 calories per 1-tablespoon serving.

That is nearly triple that of powdered peanut butter– the lowest calorie nut butter surveyed. Not only that, but almond butter also contains more fat and less fiber than most of the nut butters as well.

Finally, there is walnut butter– the nut butter with the most calories.

If you’re looking to monitor and/or reduce your caloric intake, walnut butter will pose the biggest challenge of all nut butters as it contains a staggering 104 calories per 1-tablespoon serving.

That said, walnut butter does have some redeeming qualities. For one, it has the least amount of carbohydrates and the least amount of sugar too. What’s more, walnuts also contain omega-3 fatty acids— a type of unsaturated fat with various health benefits.

On the flip side, though, walnut butter also has the most fat of all nut butters surveyed.

In conclusion, the lowest calorie nut butter may not be as clear-cut as you’d think. If we’re going to include processed varieties then powdered peanut butter, such as PBFit, is the clear winner. The inclusion of seed butters also complicates this choice.

Regardless of whichever has the least calories, one thing is for sure: any of these options are a great way to add a rich, earthy flavor to whatever you spread them on.